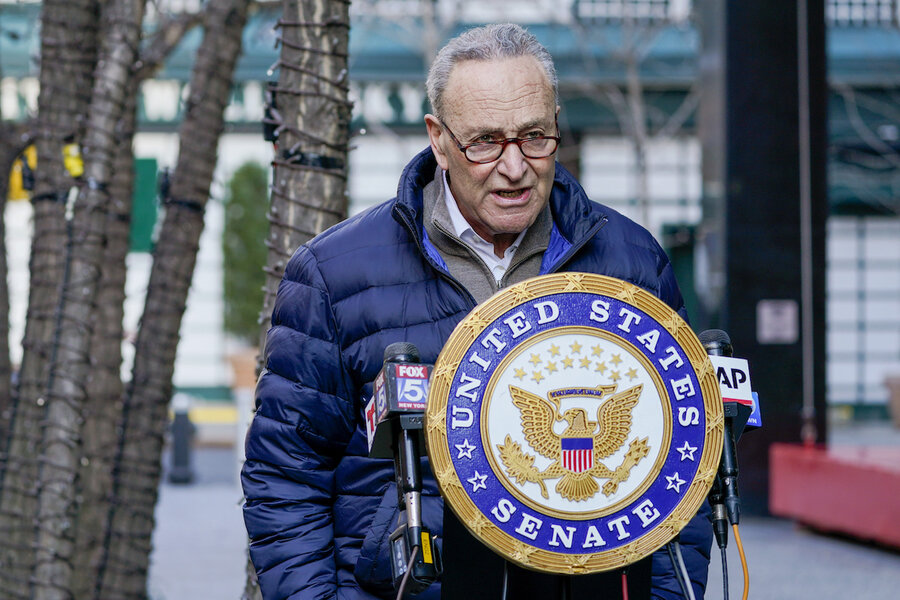 Chuck Schumer is used to drinking from a firehose. But the incoming United States Senate majority leader has never taken on such a torrent of challenges, with the opening days of both the Biden administration and Democratic control of the Senate coming at the very moment an impeachment trial gets underway.

A 38-year veteran of Congress who first came to the Senate during President Bill Clinton’s impeachment, Mr. Schumer is a bundle of energy with one overriding mandate: Help President-elect Joe Biden become a successful president. To do so, he’ll have to leverage the narrowest possible majority – a 50-50 Senate with the incoming vice president, Kamala Harris, delivering the tie-breaking vote.

It’s a tough assignment. It’s far easier, though often unsatisfying, to be a minority leader equipped with the tools of obstruction than it is to be a majority leader armed mostly with persuasion. But the goodwill Mr. Schumer enjoys with key members, and his careful management of the party’s constituencies, could help ease the way.

“Chuck Schumer has done a remarkable job as our caucus leader the last four years holding our caucus together,” said a beaming Sen. Chris Coons, D-Del., as he entered the Senate chamber during last Wednesday’s Electoral College count, speaking just before a mob of violent supporters of President Donald Trump assaulted the Capitol and the situation turned dire. It was the day after the twin Georgia runoff elections unexpectedly delivered control to Democrats.

Then Mr. Schumer appeared. “What did I just give a quote about? Our capable majority leader!” Senator Coons said.

Less than an hour later, Mr. Schumer was in peril – on the Senate floor – under the protection of a Capitol Police officer with a submachine gun standing between him and GOP leader Mitch McConnell as the mob breached the building.

The ransacking of the Capitol has brought impeachment to the Senate’s door again and set Republicans on their heels. And it’s put a spotlight on whether the polarized, diminished chamber can process Mr. Biden’s agenda.

Take the installation of Mr. Biden’s Cabinet. The Senate has traditionally tried to confirm a batch of the most important nominees on Inauguration Day, Jan. 20, and the days thereafter. But to do so requires the cooperation of the entire Senate.

Democrats slow-walked many of Mr. Trump’s Cabinet picks four years ago after a crushing election loss, but there’s a palpable sense that Republicans may be more cooperative now, at least when confirming national security nominees and picks like Janet Yellen to run the Treasury Department.

Mr. Schumer seeks – and is used to operating in – the spotlight, whether he’s helping run the unwieldy, increasingly divided Senate, micromanaging his beloved Democratic caucus or crisscrossing New York.

Any of these is a full-time job. And they don’t always point him in the same direction. For instance, Mr. Biden is preaching bipartisanship, and Mr. Schumer wants to help, but tensions are inevitable with ardent progressives such as Rep. Alexandria Ocasio-Cortez, an ambitious Bronx Democrat whom Schumer allies are watching closely as he runs for a fifth term in 2022.

Mr. Schumer was a force in Mr. Biden’s decision to “go big” on Thursday with a $1.9 trillion COVID-19 relief and economic stimulus bill that was bigger than earlier Biden drafts. Progressives hailed the measure.

Meanwhile, the prospect of an impeachment trial in the opening days of Mr. Biden’s term adds a huge degree of uncertainty. Senate rules are unforgiving, but Mr. Schumer and Mr. McConnell are hoping to establish a dual-track process to confirm nominations even as the trial unfolds.

Mr. McConnell and Mr. Schumer have a tortured, tense relationship after years of bruising political battles and fights over Supreme Court nominees. They rarely talk spontaneously and have no hesitation in slinging barbs that earlier generations of leaders managed to avoid.

But Mr. Biden and Mr. McConnell are long-standing friends, and the Kentucky Republican – pondering a “guilty” vote in Mr. Trump’s second impeachment trial and still absorbing the disastrous Senate losses in Georgia – appears inclined to help Mr. Biden as best he can.

The events of the past week, as damaging and unsettling as they were for the country, seem likely to assist Mr. Biden and Mr. Schumer. What is more, Democratic control of the chamber comes with filibuster-proof treatment of Mr. Biden’s nominees, with only a simple majority needed, though Republicans could easily force delays.

Mr. McConnell and his Republican caucus want to “reasonably cooperate on the national security nominations,” said Hazen Marshall, a former McConnell policy aide. “His view has traditionally been that presidents deserve their staff, unless their staff are crazy or criminals.” But GOP senators are sure to drag their feet on less urgent Cabinet posts given the experience under Mr. Trump, when even former Sen. Dan Coats, R-Ind., had to endure delays.

But with the economy slipping and the public appalled by the melee in Washington, GOP resistance to Mr. Biden’s $1.9 trillion COVID-19 relief package or his slate of Cabinet picks may not be as resolute.

“There’s a lot to do, but Democrats are on the right side of all of it,” said former Schumer strategist and confidant Matt House. “These are good problems to have.”

Amid the dizzying pace, Mr. Schumer also tends to New York. A Brooklyn native, Mr. Schumer makes a visit to each of the state’s 62 counties every year. And his spur-of-the-moment visits to local events like high school graduations and, more recently, unannounced drop-ins on community Zoom calls are the stuff of legend.

Last Thursday, little more than 24 hours after the Capitol riot, Mr. Schumer hopped on a call with a community board in Sunnyside, Queens. He spent the opening minutes thanking board members. “You guys and gals do a great job – I know what it’s like,” Mr. Schumer said, according to the Sunnyside Post. “When things go bad you hear about it; when things are great you hear nothing.”

And after Mr. Trump’s impeachment Wednesday, Mr. Schumer heaped praise on local New York media members in a call with publishers and broadcasters thanking him for steering stimulus dollars to struggling news outlets, according to an account by the Syracuse Post Standard. But he had to jump.

“Pelosi has called me and Biden, so I won’t be able to be on for too long,” Mr. Schumer said.