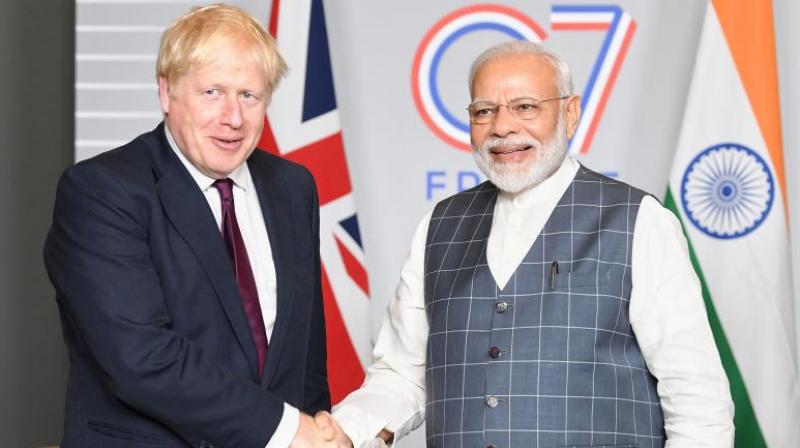 New Delhi: Currently battling a fresh wave of the raging coronavirus pandemic at home and hailing India as the “pharmacy of the world”, Britain on Sunday officially invited New Delhi to attend the G-7 summit to be hosted by it in Cornwall from June 11 to 13 this year. It had first been confirmed last month that British PM Boris Johnson had invited Prime Minister Narendra Modi to “join the UK-hosted G-7”. Mr Johnson will also now visit India before the G-7 summit.

India is not a member of the G-7 bloc that comprises seven countries — Canada, France, Germany, Italy, Japan, Britain and the United States –termed as seven of the “largest” advanced economies in the world, but the G-7 host nation can invite other nations as guests to the summit. Australia and South Korea have also been invited to attend by Britain which launched a fresh condemnation on Sunday of “Russia’s annexation of Crimea”. This has made it clear that ties between the West and Russia will continue to remain strained, something that will worry New Delhi since Moscow has been its time-tested friend for decades.

The Cornwall summit is also likely to be the first in-person G-7 leaders’ meeting after Joe Biden takes charge as US President this week.

It may be recalled that Mr Modi had earlier attended the G-7 summit in Biarritz, France, in August 2019 at the French government’s invitation. Modi had also been invited by US President Donald Trump to attend the G-7 meeting that was to have been held in the United States last year but was cancelled due to the Covid-19 pandemic. Britain on Sunday said: “The G-7 – which is made up of the UK, Canada, France, Germany, Italy, Japan, the USA and the EU — is the only forum where the world’s most influential and open societies and advanced economies are brought together for close-knit discussions”.

Hailing India on Sunday as the “pharmacy of the world”, Britain pointed out that “India already supplies more than 50 per cent of the world’s vaccines, and (that) the UK and India have worked closely together throughout the pandemic”, adding: “Our Prime Ministers speak regularly and Prime Minister Johnson has said he will visit India ahead of the G-7”.

In a statement, the British high commission in New Delhi said: “Indian Prime Minister Narendra Modi (has been) invited to attend G-7 as a guest. The summit will be held in English region of Cornwall from 11-13 June 2021. The UK will use the G7 presidency to unite leading democracies to help the world build back better from coronavirus and create a greener, more prosperous future. Australia and South Korea (have) also (been) invited as guest countries.” Britain said the three nations had been invited “to attend as guest countries to deepen the expertise and experience around the table”.

The high commission added: “UK Prime Minister Boris Johnson will use the first in-person G-7 summit in almost two years to ask leaders, including Indian Prime Minister Narendra Modi, to seize the opportunity to build back better from the coronavirus, uniting to make the future fairer, greener and more prosperous.” It further said: “Prime Ministers and Presidents from the world’s leading democracies will come together in the UK in June to address shared challenges, from beating coronavirus and tackling climate change, to ensuring that people everywhere can benefit from open trade, technological change and scientific discovery.

Britain also said: “The (British) Prime Minister’s ambition is to use the G-7 to intensify cooperation between the world’s democratic and technologically advanced nations. Between them the 10 leaders represent over 60 per cent of the people living in democracies around the world.”

It may also be recalled the British PM had last month initially accepted India’s invite to be the chief guest at the Republic Day celebrations on January 26 but had announced cancellation of his visit earlier this month due to the pandemic and the “speed at which the new coronavirus variant is spreading” in Britain. Nevertheless, political ties between the two nations have strengthened enormously under Modi and Johnson. Last month, the foreign ministers of the two nations had held discussions in New Delhi on five broad themes — connecting people, trade, defence and security, climate and health including the cooperation on the Covid vaccines, with both nations also “agreeing on key elements of a 10-year India-UK roadmap”.