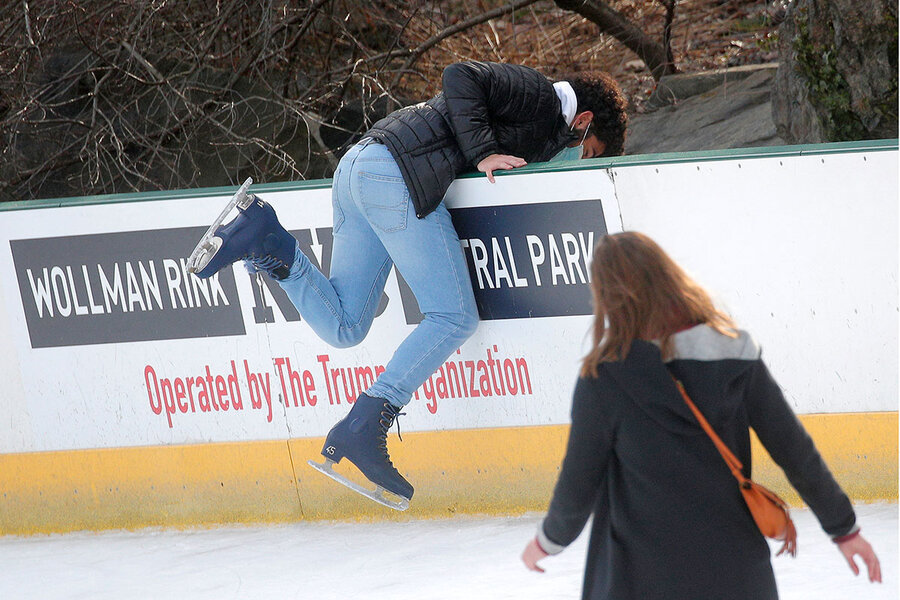 “This is primarily a symbolic move as a way to send a signal to the Republican Party that the violence that we saw … is simply not acceptable in a democracy,” says David Primo, a professor of political science and business administration at the University of Rochester. “There was genuine outrage. But the responses were very carefully calibrated. … They wanted to buy themselves flexibility.”

One of the early political casualties appears to be Doug Steinhardt, a gung-ho pro-Trump New Jersey attorney who suddenly suspended his campaign for governor on Monday, citing “unforeseen professional obligations.”

Other pro-Trump candidates may face similar decisions in the coming weeks and months, at least in heavily Democratic states, as they feel out the electorate and the corporations that might – or might not – donate to their campaigns.

“Symbolically, it’s important that the Republican Party discovers that they cannot rely on Home Depot and other corporations,” says Jerry Davis, professor of management and organizations at the University of Michigan’s Ross School of Business. But “that’s a very old-school big business response. What’s interesting to me is that tech responds by deplatforming.”

The corporate backlash has been uncharacteristically direct. “[W]e believe the President’s behavior – including encouraging an assault on the Capitol and attempting to overturn the results of a legitimate, democratic election – deserves the strongest possible condemnation,” the Business Roundtable said in a statement Wednesday.

Corporations’ financial moves have also been direct, potentially hitting Mr. Trump’s ability to get out his message on at least three fronts.

Most immediately, they hit Mr. Trump and his business in the pocketbook at a time when his golf and hotel properties were already struggling because of the pandemic. According to Forbes estimates, his net worth fell from $4.5 billion a few months before his 2016 election to $2.5 billion today.

Deutsche Bank, a key longtime lender to the Trump Organization, reportedly said it was cutting its ties to the business. New York’s Signature Bank said it was closing Mr. Trump’s personal accounts. New York City is moving to cancel its contracts with the company to run skating rinks, a carousel, and a golf course. PGA of America on Sunday announced it would no longer hold its 2022 championship on Mr. Trump’s golf course in New Jersey.

The operations of the privately owned Trump Organization are so opaque that it’s hard to tell how meaningful these losses are. What is clear is that the Trump brand has taken a big hit because of the Capitol riot. From the pandemic to his controversial presidency and reported large business debts, the risks to the Trump corporate empire are significant.

“What may be disastrous for Trump is being seen as a failed businessman and being seen as a dishonest businessman,” says Ciara Torres-Spelliscy, a fellow at New York University’s Brennan Center for Justice and author of the 2019 book “Political Brands,” which examines the 2016 election.

The Manhattan District Attorney’s Office is investigating the Trump Organization for criminal activity.

Perhaps the bigger blow to the president’s political clout is the deplatforming from the major social media firms. When presidents leave office, they lose a huge megaphone to reach their supporters. Facebook and YouTube have crimped Mr. Trump’s outreach even more by suspending his accounts. Snapchat and Twitter did so permanently, the latter’s move a particular blow for the tweet-prone president.

“You’re much more likely to believe a lie if it comes to you through your network of trust,” says Ms. Torres-Spelliscy. “Part of what explains the myth of voter fraud being believed by so many people is that it came through a network that they trusted, which was the president and his Twitter feed and his Facebook posts. ‘Deplatforming’ him takes away that vector for that lie.”

The deplatforming is the most effective anti-Trump action that corporations have taken, but it may backfire, says Ray La Raja, a political science professor at the University of Massachusetts Amherst. “It’s a risk for these organizations to do that because it really calls attention to how much power they have.”

The third front of corporate opposition is targeting his political supporters, especially the 147 members of Congress who last week objected to one or more certifications of President-elect Joe Biden’s election.

More than 50 corporate political action committees, including those for Goldman Sachs, American Airlines, Blue Cross Blue Shield, and Dow, have temporarily suspended donations to either all members of Congress or the 147 objectors specifically. And other PACs are mulling similar actions. Hallmark’s PAC has asked objecting Sens. Josh Hawley and Roger Marshall for its donations back. Financial adviser Charles Schwab is dissolving its PAC altogether.

As big as corporate PACs are, they’re less important than they used to be. For one thing, politicians increasingly rely on small donors, along with billionaires. In the most recent election cycle, the 147 GOP objectors raised in all some $68 million from corporate PACs – some 16% of their total fundraising, according to the Center for Responsive Politics (CRP), a Washington nonprofit that tracks campaign money. Some pro-Trump politicians are more reliant on PACs than others.

Also, corporations can donate to so-called dark pools, which makes contributions hard to trace. For example, the Pharmaceutical Research and Manufacturers of America gave some $144,000 to GOP candidates in PAC money but $4.5 million to a GOP dark money group called American Action Network, the CRP reports.

“We don’t know, for the most part, who the corporations are funding,” says Beth Allen, a spokeswoman for the Communications Workers of America, a union that is calling for comprehensive campaign finance reform.

Backlash as a fundraising tool?

For Trump politicians in red states, the corporate backlash could actually prove to be a valuable fundraising tool if they can position themselves as standing up to corporations rather than caving to them, says Professor Primo of the University of Rochester. “A lot is going to depend, of course, on whether these legislators are still considered viable for reelection in their district.”

For the corporate actions to prove meaningful in the long term, they will have to stay in place for some time, campaign finance experts say. That includes the pause in PAC donations and the social media companies’ bans on Mr. Trump.

But voters’ memories are short. Political fortunes can turn on a dime. In 2018, for example, several corporate PACs asked for their donations back after Republican Sen. Cindy Hyde-Smith of Mississippi made controversial comments about attending public hangings and curtailing Democratic votes. Despite the lack of corporate support, she won the special election. A year later, several major PACS, including Exxon Mobil and Genentech, were contributing to her campaign, and she won reelection in 2020. An ardent Trump supporter, she is one of the handful of senators who voted last week against certifying the election results of Arizona and Pennsylvania.

“How many times have we said, ‘Oh, this is it. … He’s gone too far this time,’” Professor Primo says. “He’s come back time and again. So it would be a mistake to just think he’s going to go away into the night quietly.”