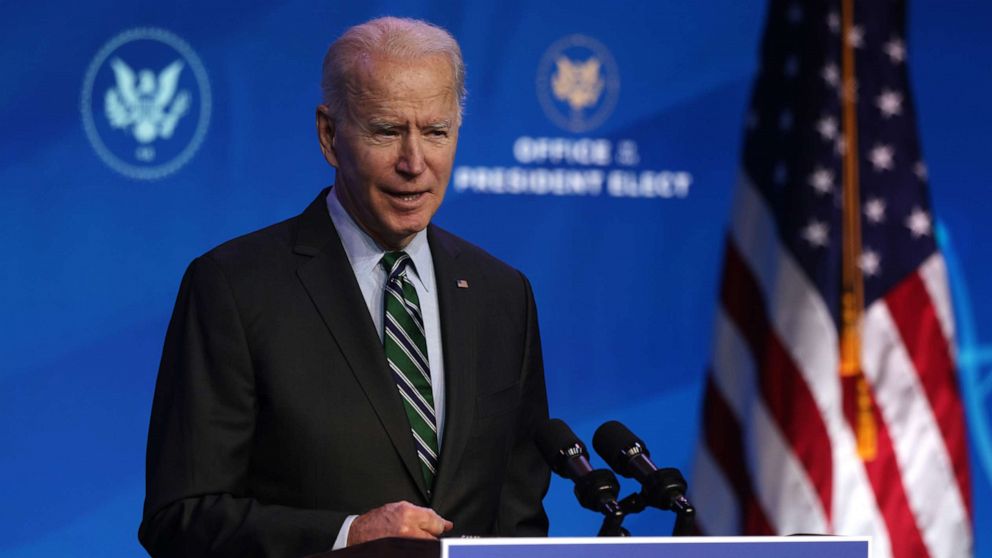 This young year has already brought an attempted insurrection and an impeachment of a president.

But the historical pivot point January 2021 is remembered for is more likely the inauguration. And if the crises confronting President-elect Joe Biden have only grown, the clear signal from the incoming administration is to not let them go to waste.

Biden and his team are fashioning an approach that’s optimistic in its assumptions about Washington — and potentially at odds with his inaugural emphasis on unity. Their hope is that addressing the pandemic through fast, bold action will lead to a broader national healing — even as President Donald Trump’s impeachment proceedings consume legislative attention.

The latest ABC News/Washington Post poll shows 67% approval of Biden’s handling of the transition — high by standards of the polarized era, though lower than that of some recent predecessors. The poll shows significantly less confidence in Biden’s ability to tame COVID-19, address racial injustices, rebuild the economy and improve America’s standing in the world.

Presidents are often cast as reactions to their predecessors. It’s perhaps inevitable that what Biden seeks to do early in his tenure will be viewed as unwinding what Trump did – or doing what he didn’t.

Exactly half of this week will sit under the tenure of the 45th president, while the second half will belong to the 46th. Both of those periods have the potential to be consequential — for much different reasons.

Incoming presidents often talk about goals for the first 100 days in office, but president-elect Biden is trying to move much quicker and already previewing a check-list for the first 10 days of his administration.

“On Inauguration Day, President-elect Biden will sign roughly a dozen actions to combat the four crises, restore humanity to our immigration system, and make government function for the people,” soon-to-be White House Chief of Staff Ron Klain described in a memo over the weekend.

Biden wants to immediately rollback policies from the last administration as well as extended relief and protections to all Americans still dealing with this pandemic. He plans to issue a mask mandate on federal property and, in more subtle ways through staffing and appointments, re-exert power, influence and visibility of the federal government across the country.

The Senate will hold six hearings next week related to some of his Cabinet nominations. His team has largely prioritized getting national defense leaders in place.

The TIP with Averi Harper

Vice President-elect Kamala Harris’ tenure as a U.S. senator will come to a close Monday, when she’s slated to make a formal announcement of her resignation. Her replacement, California Attorney General Alex Padilla, could take his oath as soon as Tuesday. Those close to Harris said her work in the legislative body will continue after she’s sworn into the office of vice president.

“As she resigns from the Senate, she’s preparing to take an oath that will allow her to preside over it,” said one Harris aide.

To mark Martin Luther King Jr. Day, Harris will participate in service activities that will focus on COVID-19 relief. According to the Biden Inaugural Committee, those events will address “challenges that have been exacerbated by the pandemic, such as poverty, hunger, racial injustice, homelessness, mental health, and educational disparities.”

The civil rights icon for whom the holiday honors was a member of Alpha Phi Alpha Fraternity, Inc., the first historically Black fraternity, which is said to have inspired the inception of Harris’ sorority, Alpha Kappa Alpha Sorority, Inc. Her observance of the day of service is in the spirit of the sorority’s motto, “service to all mankind.” And the service events come just days before Harris will be sworn in with the Bible of another notable member of her companion Black Greek letter organization — the late Supreme Court Justice Thurgood Marshall. Marshall’s work inspired Harris’ chosen career path and her matriculation at Howard University. Marshall graduated from the HBCU’s law school in 1933.

Ahead of his inauguration, Americans by more than a 40-point margin approve of the way Biden has handled the presidential transition — but just half are confident he’ll make the right decisions for the country’s future, with muted expectations for his progress on key issues. As to the man he’s replacing, 68% in this ABC News/Washington Post poll oppose Trump pardoning himself for any federal crimes he may be accused of committing. And 58% support Twitter’s ban on Trump, muzzling the outgoing president on his main platform.