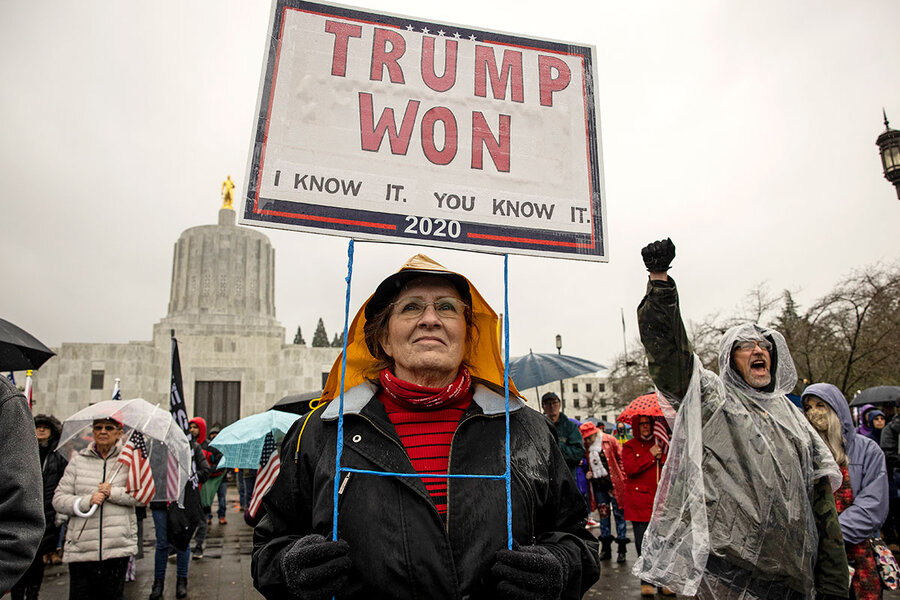 It’s a problem not unique to today’s America. Its implications stem not just from one leader’s actions but also from the psychology of followers and a fractured​​ political ​and media ​culture.​ ​And the answers may hinge not merely on efforts to hold Mr. Trump accountable but on the messages ​that others – notably ​his erstwhile political allies – ​choose from here​.

Lies can be powerful. Some wear on the truth and lead those who want to believe into a parallel world more in accordance with their presuppositions. The notion that Mr. Trump actually won the election, and that a liberal-elite conspiracy is denying him a second term, is such a lie. It is not a “Big Lie,” in the sense of establishing an entire, sinister, and false view of the world, as did the Nazi myth that Germany lost World War I because Jews and socialists stabbed the nation in the back. But it is big enough to shake American democracy.

Many GOP lawmakers helped perpetuate the president’s lie prior to last Wednesday’s Capitol riot. And many have declined to disavow it even after a mob rampaged through their chambers. Seven senators and 138 representatives voted to sustain objections to Pennsylvania’s Electoral College votes, for instance, even after seeing the damage rioters had done.

Republicans who continue to support those challenges give the president’s falsehoods more credence and ensure they continue to spread through the rank-and-file. And disavowal of the president’s claim to victory by leaders the GOP base will listen to may be the only way to begin dousing the embers of the mob’s anger.

President Trump himself on Wednesday released a video denouncing the Capitol violence, saying it stands against everything “our movement” believes in. However, he did not back down from his insistence that he was the election’s rightful winner.

“If you want reconciliation, it’s first of all important to recognize the legitimacy of the election results,” says Michael Brenner, a professor of history at American University and author of the forthcoming book “In Hitler’s Munich: Jews, Antisemites, and the Rise of Nazism.”

Lies surging around the world

In some ways, last week’s Capitol riot is like the Munich Beer Hall Putsch of Nov. 8, 1923, a failed coup attempt by the Nazi party and Adolf Hitler, says Professor Brenner.

In both, an outraged mob marched through the streets after a long and disjointed angry speech by their leader. In both there was violence, including broken windows, shots, and bloodshed. Order was eventually restored in both.

Both also had falsehoods at their heart. The Nazis’ was a large one of national betrayal. President Trump’s is a narrow one of an allegedly stolen victory.

“If you to set up your own truth because the real truth does not fit your political agenda, the lying is important,” says Professor Brenner. “That’s what we’re witnessing now.”

Indeed, lying and deceit may be surging at the national level in other parts of the world.

In Hungary populist leader Viktor Orban has attacked financier George Soros, a Hungarian-born Jew, as a shadowy force undermining the country. Evocations of a Jewish cabal controlling global money flows are among the oldest of anti-Semitic tropes.

In Poland the conservative Law and Justice Party has pushed a wide-ranging conspiracy theory centered on allegations that a 2010 plane crash that killed many Polish officials – including the then-president, brother of the current president – was caused by Russia. Investigations by regional experts have all blamed bad weather and pilot error for the crash.

Back in America, the false Dominion voting machine theory of voter fraud, a nearly impossible-to-follow tale that begins in Venezuela and ends with “back doors” and “vote shuffling” and allegations that the company is spiriting parts of its machines out of the country, is one sub-plot of the stolen-election conspiracy falsehood. The fact that it was ludicrously complicated and would have had to involve so many people it would be impossible to conceal did not stop President Trump from berating Georgia Secretary of State Brad Raffensperger for not taking it seriously in an extraordinary phone call earlier this month.

Earlier this week, actor and former California governor Arnold Schwarzenegger accused President Trump of instigating the insurrection in the Capitol by misleading people with lies. Raised in a defeated Austria in the years following World War II, Mr. Schwarzenegger says his father and neighbors were also misled with lies, and suffered accordingly.

“I know where such lies lead,” Mr. Schwarzenegger, a Republican, said.

President Trump’s devoted followers do not think he is telling them lies. Many believe he is telling the real truth, and it is the media, especially the non-right-wing media, that is the greatest source of American falsehoods.

In numerous interviews prior to Election Day, and even afterward, Monitor reporters heard from Trump voters that they were sure he had won. Many said they also believed President-elect Joe Biden would not be inaugurated on Jan. 20.

Polls show the same story. While there has been erosion for President Trump in approval ratings since Jan. 6, even among Republicans, a sizable majority of members of the GOP still back his victory claim. A just-released poll by Pew Research finds that 64% of his supporters say Trump definitely or probably won the election. (Among all Americans, 65% say Mr. Biden won, and three-quarters believe Mr. Trump bears at least some responsibility for the Jan. 6 Capitol invasion.)

Yet the evidence appears overwhelming. None of the dozens of court cases brought by the Trump campaign legal team succeeded. Former Attorney General Bill Barr said there was no widespread fraud, among other top officials. Georgia Secretary of State Raffensperger, a Republican, was among the officials of both parties who attested to their vote counts. Videos of alleged vote stuffing and boxes of ballots being delivered after the count and so forth were routinely exposed as benign legal procedures or not even about voting at all.

When it comes to decisions, we think of ourselves as scientists, dispassionately weighing evidence to reach conclusions, says Jennifer Mercieca, a professor of rhetoric and expert in political discourse at Texas A&M University.

“That’s not the case. Instead we are more like lawyers,” she says. “We already have a point and we look for evidence to support that point.”

In addition, over the past 30 years or so a cold war has developed between historic legacy media and new right-wing media for the eyes and ears of voters. In that context Republicans have steadily grown more powerful, whatever their fortunes at the ballot box.

With social media contributing to a deluge of information, political discourse becomes less a reasoned debate and more a display of spectacle, says Professor Mercieca. That’s something at which Mr. Trump excels.

The Capitol mob itself was an example of this trend. As they breached barriers and stormed the halls of Congress it seemed every MAGA-hat wearer was also taking selfies, live-streaming, or otherwise creating content for their social media.

As for President Trump, his loss of Twitter and other social media accounts must be a blow, taking away his means of speaking directly to his supporters and forcing him to depend on the news media to communicate.

“He is dependent on them to carry his message. And for him dependency is weakness,” Professor Mercieca says.