Greetings, radio amateurs- DIY !
Capacitors are one of the most commonly used radio components, along with resistors, so in the course of radio amateur activities, it is often necessary to check their suitability for work. This may be relevant when using not new elements, but soldered from old boards – unfortunately, radio components in stores do not become cheaper every year, which is partly why many do not hesitate to use soldered used devices to create homemade devices. In addition, the quality of the radio components sold has dropped dramatically recently – manufacturers are trying to save on materials, and unscrupulous ones sell fakes at all, therefore, in especially critical cases, you have to control the quality of the newly purchased items. In particular, this applies to capacitors, because if everything is quite simple with resistors – they either correspond to the nominal resistance or not, then it is more difficult with capacitors – in addition to capacitance, which, by the way, can have a very large tolerance, capacitors are characterized by such a parameter as ESR, or internal resistance.
I would like to note that this statement is true primarily for electrolytic capacitors, other types (ceramic, film, etc.) have a different internal structure, materials, and as a rule, their ESR is so small that it is neglected. The lower the ESR of the capacitor, the better, often electrolytic capacitors are used as power supply filters, and if the ESR of the capacitor is too high, the capacitor will not cope with the task of suppressing ripple, especially at a high frequency, despite the fact that it may have a large capacity … An increase in ESR also leads to a heating of the capacitor, all with an increased ESR, a parasitic resistor seems to be installed in series with the capacitor, and a certain voltage drops across this resistor with each charge-discharge cycle of the capacitor. Many modern multimeters are equipped with the additional ability to measure capacitance, but there are practically no models that would measure ESR as well – and this is a very urgent task, because even with normal capacitance, a capacitor may be unusable due to ESR. Therefore, it is proposed for assembly a compact and fairly accurate measuring probe with an arrow scale, which will clearly show the ESR value of the measured capacitor.
The basis of the circuit is the domestic logic microcircuit K561LN2, which is 6 logical elements “NOT”, it belongs to the family of CMOS logic. In addition to the microcircuit itself, there is a little strapping in the form of resistors and capacitors. On the left side of the diagram, the connection of the arrow head is shown, a pair of diodes are also visible there – note that the diodes must be germanium, the widespread D9 with any letter index will do. The arrow head itself can be designed for a total deflection current of 100-500 μA, so almost any will do – the author decided to use a compact head from an old tape recorder. The presence of a graduated scale on the head is not necessary – if you wish, in any case, you can put your own, printed on a printer at the desired scale, there. The device belongs to probes and it is unjustified to call it a measuring device, therefore it also does not make much sense to calibrate the scale in units of measurement, it is enough just to clearly see the angle of deflection of the arrow when measuring a particular capacitor. Please note that the arrow head has polarity – if the arrow tries to deviate in the wrong direction, the head connection contacts should be reversed. 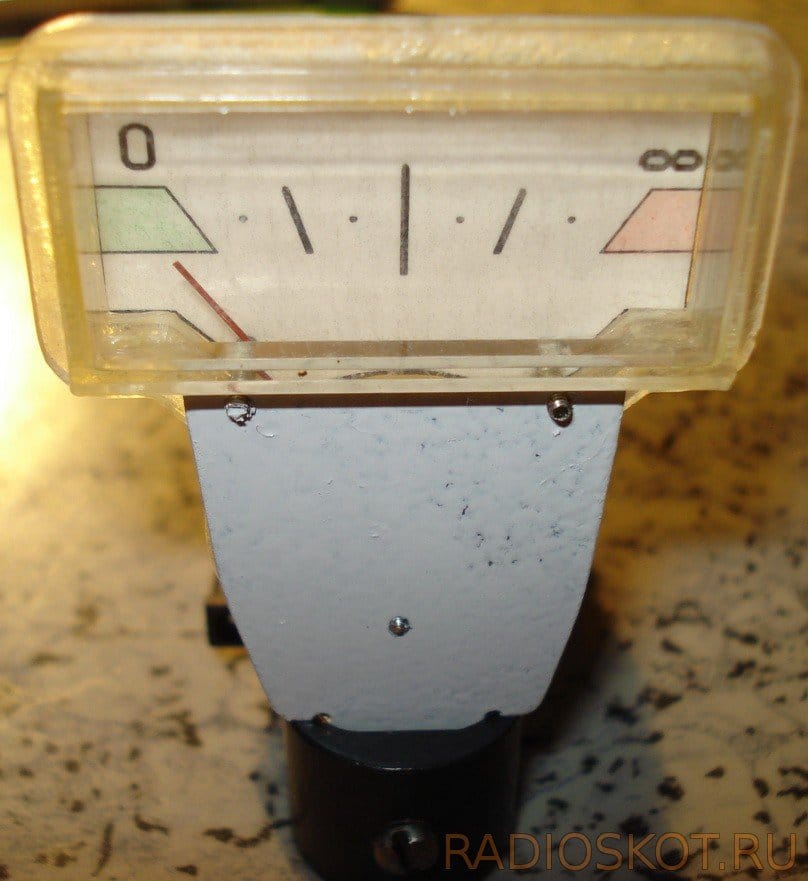 The diagram shows a trimmer resistor R1 with a resistance of 1.5 kOhm, it is necessary to set the value at which the arrow will completely deviate along the scale. The device is, in fact, a resistance meter in the range from tenths of ohms to ten ohms – you can set the setting so that the arrow will deviate completely at 10 Ohm ESR, or you can configure so that the total deviation will be already at 1 Ohm – it depends on what accuracy is needed and what capacitors will be tested. Conventional 1-10 ohm resistors can be used as references to calibrate the probe. It is advisable to bring the trimmer resistor for tuning to a convenient place outside the case, as the author did.
The measured capacitor in the diagram is marked as Cx, it is not connected directly to the microcircuit, but through a capacitor – this is an important condition. In order not to wind the transformer himself, the author took a ready-made one from a faulty energy-saving light bulb, but you can wind it yourself on a ferrite ring. The primary winding will contain 150 turns with a 0.1 mm wire, the secondary 8 turns with a 0.5 mm wire, the number of turns in the windings must be selected to achieve the best result of the circuit, depending on the brand of ferrite used. 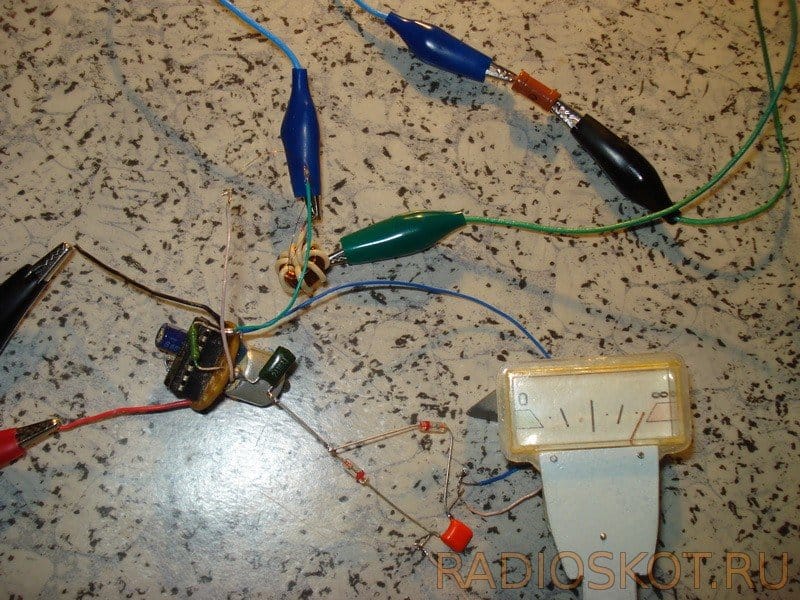 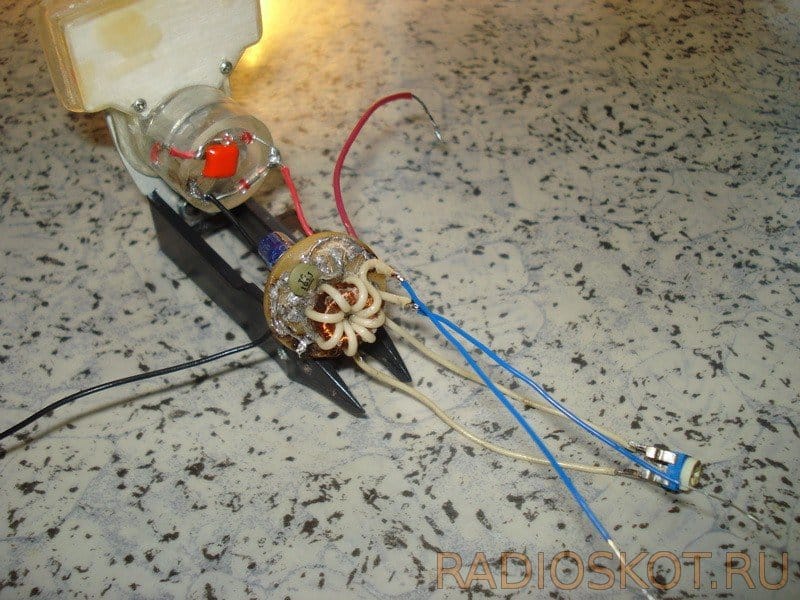 The elements in the strapping of the microcircuit can be soldered by hanging mounting directly on its terminals, or you can etch a specially printed circuit board, as the author did, the drawing of the printed circuit board is shown in the picture above. The elements in the connection of the arrow head, a capacitor and a pair of diodes, are soldered directly on the terminals of the head. A large plastic tweezers act as a basis for the whole structure – an arrow head is attached at one end of it, and copper plates are fixed at two tips of the tweezers, with which it is very convenient to connect the probe to the capacitor being measured.
Please note that this circuit is sensitive to supply voltage – changing or pulsing the supply voltage may cause the probe to fail to calibrate. Therefore, the device should be powered by a stabilized voltage source, for example, from a lithium-ion battery with a 5V pulse boost converter connected, in this case, you should not spare the power supply capacitance at the circuit input, it will also not hurt to set the inductance in the break of one of the supply wires for better suppression ripple. Battery powered provides mobility for the probe – you can take it anywhere.
< img class = "aligncenter" alt = "ESR capacitor tester" src = "https://usamodelkina.ru/uploads/posts/2021-01/1610988429_8.jpg"/> All electronic parts of the circuit are placed in a dielectric cylinder, a variable tuning resistor is attached to the reverse side. Below are photographs of the probe's operation: in the picture below the probes are closed, the arrow is in the minimum position. 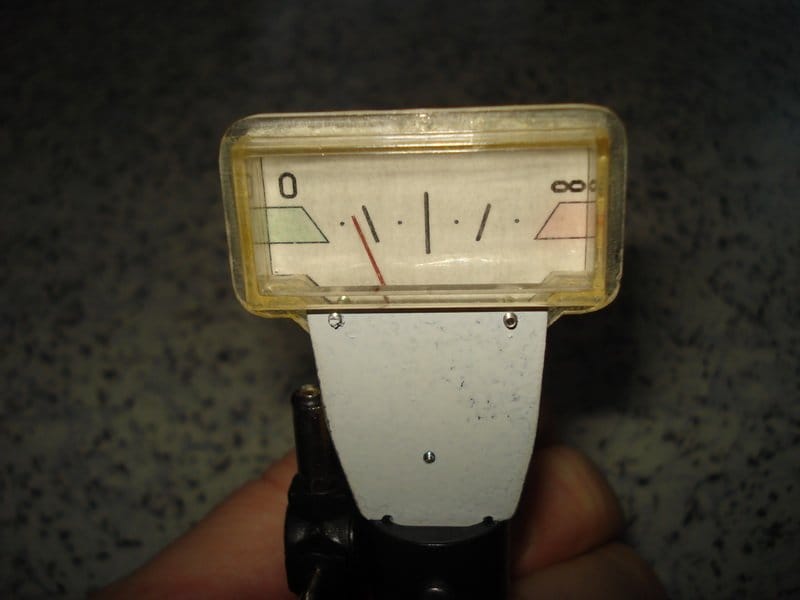 0.1 resistor connected Ohm. As you can see, the arrow has moved noticeably.
A 1 Ohm resistor is connected.
Thus, we have obtained an extremely useful device for radio amateurs, which can become an indispensable assistant when using used equipment. capacitors. The picture below shows the sorting process, the author tested the available capacitors and eliminated those that have exceeded the ESR. 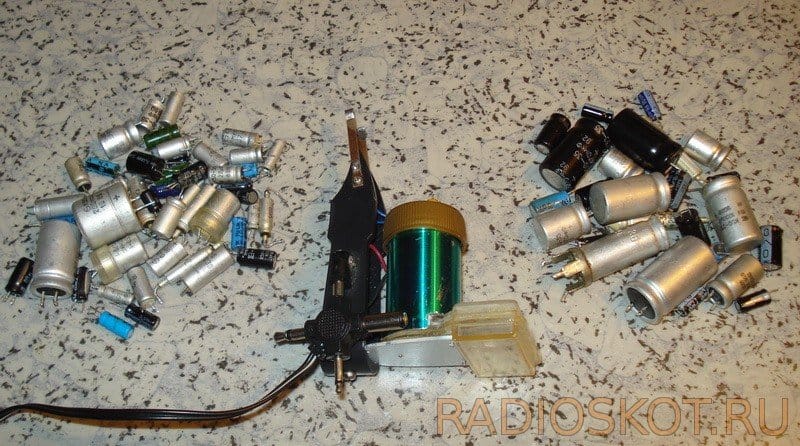