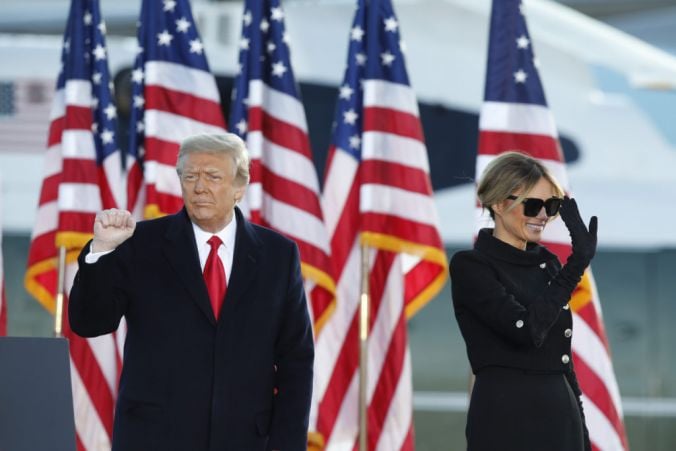 Donald Trump hinted at a comeback as he said farewell to Washington while breaking tradition to avoid the inauguration ceremony of new US President Joe Biden.

“So just a goodbye. We love you,” Mr Trump told supporters at Joint Base Andrews in Maryland where he walked across a red carpet and boarded Air Force One to head to Florida. “We will be back in some form.”

Mr Trump departed office as the only president ever impeached twice, and with millions more out of work than when he was sworn in and 400,000 dead from the coronavirus.

Under his watch, Republicans lost the presidency and both chambers of Congress. He will be forever remembered for inciting an insurrection, two weeks before Democrat Joe Biden moved into the White House, at the Capitol that left five dead, including a Capitol Police officer.

It was on Mr Trump’s Inauguration Day, on January 20, 2017, that he had painted a dire picture of “American carnage”.

Mr Trump, who became the first president in modern history to boycott his successor’s inauguration, is still stewing about his loss and maintains that the election won by Mr Biden was stolen from him.

Republican officials in several critical states, members of his own administration and a wide swath of judges, including those appointed by Mr Trump, have rejected those arguments.

Mr Trump refused to participate in any of the symbolic passing-of-the-torch traditions surrounding the peaceful transition of power, including inviting Joe and Jill Biden to the White House for a get-to-know-you visit.

He did follow at least one tradition: The White House said Mr Trump left behind a note for Mr Biden. A spokesman for Mr Trump, Judd Deere, declined to say what Mr Trump wrote or characterise the sentiment in the note, citing privacy for communication between presidents.

Members of Mr Trump’s family gathered for the send-off on the military base along with the president’s loyalists.

Speaking without notes, Mr Trump said his presidency was an “incredible four years”. He told the crowd that he and his wife Melania Trump loved them and praised his family for its hard work, saying they could have chosen to have an easier life.

He said of his successor’s administration: “I hope they don’t raise your taxes, but if they do, I told you so.”

He acknowledged his was not a “regular administration” and told his backers that he would be returning in some form. He said the Trump campaign had worked so hard.

Without mentioning Mr Biden’s name, Mr Trump wished the new administration great luck and success, which he said would be made easier because he had laid “a foundation”.

He told the crowd: “I will always fight for you. I will be watching. I will be listening.”

Before arriving at the airport, Mr Trump told reporters on the South Lawn of the White House that being president had been the honour of his lifetime.

He said: “We love the American people, and again, it has been something very special. And I just want to say goodbye, but hopefully it’s not a long-term goodbye. We’ll see each other again.”

Mr and Mrs Trump landed in Florida more than an hour before Mr Biden was sworn in as the 46th US president. Air Force One flew low along the Florida coast as Mr Biden’s inauguration ceremony flashed across televisions on board.

A loud cheer went up from the crowd awaiting his arrival when the plane made a low approach to Palm Beach International Airport as the “Star-Spangled Banner” played over loudspeakers.

Several hundred supporters lined his route to Mr Trump’s Mar-a-Lago club. It had a party atmosphere. Trump and American flags waved, with many supporters wearing red, white and blue clothing.