Greetings radio amateurs- homemade products !
We must admit that the TV was a truly incredible invention – once people could only dream of such technologies, but now it has become completely commonplace. But everything has its downside – and quite often the TV becomes the subject of domestic quarrels, when one of the household members starts to watch TV programs loudly, and it interferes with the rest. Unfortunately, most TVs, even modern ones, do not provide for any kind of wireless sound transmission directly to the “viewer's” ears, to headphones, but this option would be useful to many. On sale you can find a fairly wide variety of wireless headphones that work using Bluetooth technology and transmit sound in real time. They work quite simply to the audio output, for example, a special transmitter is connected to the same TV, the receiver is built directly into the headphones, they communicate with each other at a frequency of about 2.4 GHz, transmitting sound or music with practically no loss of quality.
There are also independent sound transmitters using Blutooth, which allow you to connect to them, for example, using a phone, which will act as a receiver, and ordinary wired headphones are already connected to the phone's output. Nevertheless, all the same can be done without buying ready-made headphones – to solder a special circuit with your own hands , perhaps, it will be somewhat inferior in technical characteristics – but the parts for its assembly will cost much less than ready-made headphones, and besides, using a device made with your own hands, with a soul, is much more pleasant. For wireless sound transmission, you will need to assemble a FM transmitter circuit that will broadcast a signal at a frequency from the 88-108 MHz range, so any cell phone with a radio receiver, or just a compact player or pocket radio, will act as a receiver. The assembly diagram is shown below. 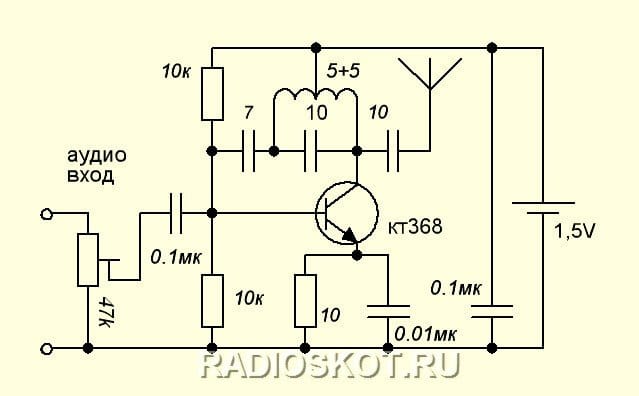 This circuit consists of only one stage on a microwave transistor – additional amplification stages are not required, because even with such a scheme, the range will be 20-30 m, which is enough to cover the area of ​​an apartment – what is needed for wireless headphones. The long range could be rather a disadvantage, because the signal is transmitted at frequencies of 88-108 MHz, where many commercial radio stations operate, so anyone nearby, turning on their household receiver, could pick up our signal, which is not good. The low power of the transmitter practically excludes such situations, moreover, you can not be afraid that the transmitted signal will interfere with the operation of some special services radios.
On the left side of the circuit there is an audio input – you can take the right or left channel from the audio output of the TV, or, in an amicable way, you need to mix them by connecting the contacts of the right and left channels through 1 kOhm resistors, and connect the connection point of these resistors to the input transmitter circuits. TV audio output is usually implemented either in the form of “tulips”, or using a 3.5 mm jack for ordinary headphones – in both cases, you need to get a mating part for these connectors in order to connect to the TV. Immediately at the input of the circuit, you can see a 47 kOhm variable resistor, it is needed to adjust the sound volume. It is more convenient, of course, to adjust the volume on the phone, which will always be at hand, so a regulator in the transmitter is needed in order to set the level once. You can completely remove this regulator by connecting the input directly to a capacitor, however, a too strong signal from some audio outputs can overload the circuit, the sound will be distorted, and you can reduce the signal just using this regulator. A variable or trimming resistor of any type with a resistance of 47-100 kOhm is suitable. The transistor in this circuit acts as a generator, it creates oscillations at the carrier frequency (88-108 MHz), modulated by an audio signal.
An oscillatory circuit of a parallel-connected coil and a 10 pF capacitor is responsible for the formation of the carrier frequency; the operating frequency will depend on the parameters of these elements. The coil contains 10 turns on a 5 mm mandrel, it is wound with a copper enameled wire on a mandrel with a diameter of 5 mm, as can be seen from the diagram, the coil has a tap from the middle, so its designation looks like 5 + 5 turns. It is important to wind the coil carefully – the stability of the transmitter frequency will depend on it. For additional reliability, after assembling the circuit and setting the operating frequency, the coil can be filled with paraffin, while its turns will be reliably fixed to each other. The operating frequency of the transmitter can be changed in the entire range from 88 MHz to 108 MHz, tuning can be done either by changing the number of turns of the coil – for example, if you wind 6 + 6 turns, then the frequency will decrease by about 10-15 MHz, or by compression/expansion of the turns for more fine tuning to the desired frequency. It is also convenient to change the frequency using a capacitor parallel to the coil – 10 pF remains, but a 1-5 pF trimmer is added to it, by rotating which the frequency will be smoothly adjusted. The operating frequency is selected based on the location of radio stations in your region – you need to find the most vacant frequency section and tune to its middle.
Almost any low-power high-frequency transistor is suitable for this circuit, KT368 and S9018 are especially popular, low-frequency transistors, for example, KT315 and B547, work somewhat worse, but the circuit can also start with them. All capacitors in the diagram are ceramic, resistors are low-power 0.125 or 0.25W. During installation, it is important to be careful, to make conclusions as short as possible, not to create long tracks – the installation should be the most compact. If these requirements are met, the circuit will start immediately and without “dancing with a tambourine”, subject to the use of serviceable radio components. 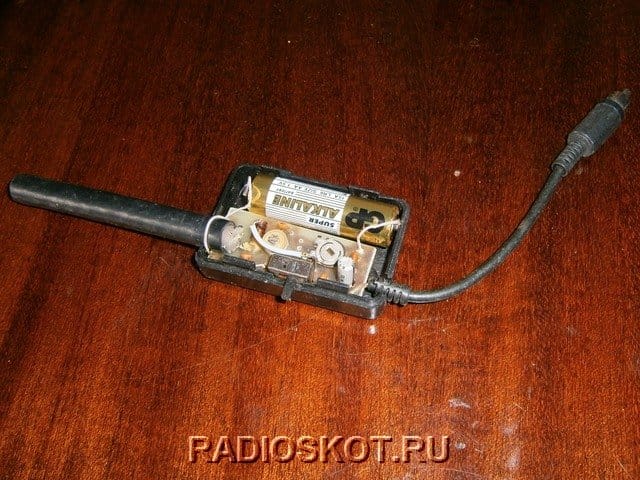 The supply voltage of the circuit is 1.5 – 3V, which is very convenient, because ordinary finger or little finger can be used for power supply. One battery will give 1.5V, if you turn on two in series, the voltage will be 3V, in this case the range of the transmitter will slightly increase. The current consumption when operating at 1.5V is about 2 mA – this is quite small, from one finger battery the circuit can work continuously for a whole week. However, it will not be superfluous to equip the transmitter with a slide switch, positioning it on the edge of the case for easy access. After assembly, the entire circuit is installed in a small case, a battery is placed next to it in a suitable holder for easy replacement. The assembled circuit and the battery take a place commensurate with a matchbox – you can place it completely on the back of the TV. 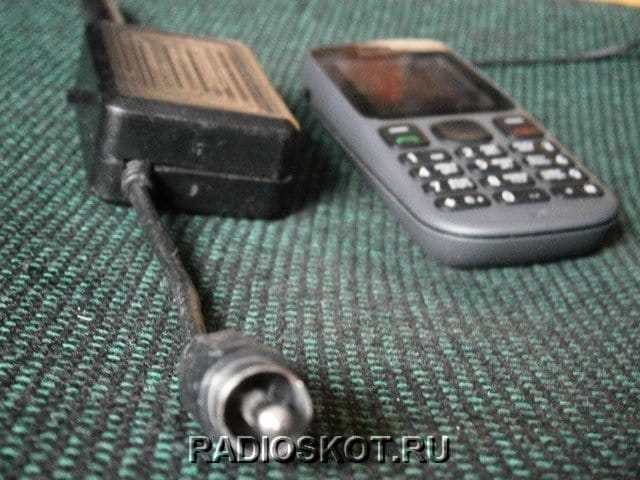 An antenna is also an important element of the circuit, because the range of the circuit will depend on it. Ideally, the antenna should be a vertically placed straight piece of wire about 80 cm long – this antenna length corresponds to about a quarter of the wavelength at these frequencies. But such an antenna will take up a lot of space, so you can experiment to achieve a good range, but at the same time, the antenna is compact. When the transmitter is working, do not touch the antenna – this can lead to a drift of the transmitter frequency and loss of signal. In general, this scheme has proven itself as a good compromise between maximum simple and fairly good stability. Happy build!