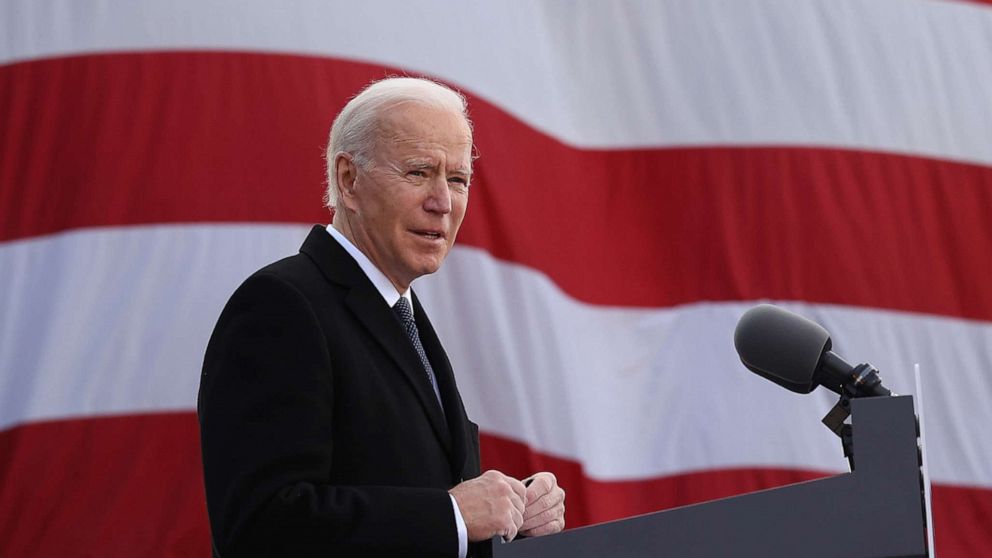 Finally, and more than a bit nervously, Joe Biden’s moment arrives on Wednesday.

Whether it can last will depend on forces beyond his control — forces that will be tested early and often as his presidency begins.

The president-elect’s inaugural speech will call for resolve and unity and be forward-looking in tone, Biden aides say. It will not and cannot avoid its placement in this moment, though, and Biden comes to office amid challenges both unique and familiar.

“To heal, we must remember,” Biden said Tuesday night at the COVID-19 memorial, shortly after his arrival in Washington.

After the scaled-back pageantry and musical performances, with the capital a militarized fortress, Biden plans to dive into the business of governing. What could be a record-setting series of executive actions will bring, among other things, a mask mandate and a reversal of President Donald Trump initiatives on the border wall and the environment, with major bills to follow on COVID-19 and immigration reform.

Governing actions more than lofty words are likely to shape the course of the Biden presidency. That would be true even if Trump were handing things over according to tradition – and if there was no assault on the Capitol or an impeachment trial looming.

Whether Biden was elected more for who he is than for who he isn’t will be a grand debate that may never be settled. But whether he can govern the way he has promised — despite or even because of all the challenges — could determine the health of the nation in more ways than one.

In addition to his COVID relief package, Biden will ask Congress to consider a new immigration bill immediately. On the first day in office, his team plans to send Capitol Hill a comprehensive immigration legislation, making good on promises from the campaign trail to prioritize the issue.

Biden’s proposal will reportedly include an eight-year pathway to citizenship for immigrants without legal status as well as expand admissions for refugees to the country and funds for fighting poverty and other “underlying causes” of migration at the source in Central America. According to a new memo from the Biden team Tuesday night, “The bill allows undocumented individuals to apply for temporary legal status, with the ability to apply for green cards after five years if they pass criminal and national security background checks and pay their taxes. Dreamers, TPS holders, and immigrant farmworkers who meet specific requirements are eligible for green cards immediately under the legislation.”

There has been bipartisan support for many similar measures in the past and with Democrats taking control of the Senate this week, Biden is at least more likely to get a vote on his major bills.

With the proposal and other executive orders too, Biden is hoping to show the country he is both rolling back some of Trump’s policies and moving forward as well.

The TIP with Averi Harper

After Kamala Harris’ own historic swearing in as the first woman and woman of color to serve as vice president of the United States, she’ll usher in three other historic firsts.

Harris is slated to swear in her successor, Alex Padilla, who will be California’s first Latino senator. She’ll also administer the oath of office for Georgia’s newest senators, the Rev. Raphael Warnock, who is the Peach State’s first Black senator, and Jon Ossoff, the first Jewish senator from the state.

It will be one of her first acts as she officially becomes president of the Senate. With a 50-50 split in the legislative body, Harris could be the tie-breaking vote, a role that could prove critical to the incoming administration’s ability to meet policy goals. When she resigned from her Senate post Monday, Harris made a point to mention in her announcement that she would fulfill her “constitutional duty” to serve as the tie-breaker, but indicated she hopes senators will work across the aisle to pass legislation.

“It is my hope that rather than come to the point of a tie, the Senate will instead find common ground and do the work of the American people,” Harris wrote.

In the waning hours of his time in office, President Donald Trump late Tuesday issued a final batch of pardons and commutations to a group that included former White House strategist Steve Bannon and two other longtime political allies, Elliott Broidy and Paul Erickson, in a move that will further solidify Trump’s legacy of using his sweeping presidential powers to benefit his inner circle. The latest batch of names, released by the White House on Trump’s final night as president, granted 73 pardons and commuted all or part of the sentence of 70 additional individuals, after Trump had already issued several dozen such directives in recent months.

ABC News’ “Start Here” podcast. Wednesday morning’s episode features a conversation with voters from both sides of the aisle on what they hope to hear from Joe Biden as he gets sworn in as America’s 46th president Wednesday. ABC News Senior White House correspondent Mary Bruce explains how Biden is navigating what will be an evenly split Senate. And historian and ABC News contributor Mark Updegrove unpacks the historical moment Biden is arriving at. http://apple.co/2HPocUL

ABC News’ “Powerhouse Politics” podcast. When President-elect Joe Biden takes over as commander-in-chief at noon on Wednesday, he’ll immediately assume responsibility for tackling the nation’s problems, both small and enormous. And while he wasn’t elected “because he created some groundswell of popular enthusiasm,” according to veteran reporter Steve Roberts, Biden could be “the person to meet this moment.” In an interview on ABC News’ “Powerhouse Politics” podcast with Political Director Rick Klein, Roberts, an ABC News political analyst, argued that Biden won’t be able to bring President Donald Trump’s most ardent supporters over to his side, but he could appeal to Republicans who’ve become “disillusioned” with Trump and the party’s politics he shaped over the last four years. If he can, it will “help sway some of the Republicans on Capitol Hill who have been petrified of retaliation by Trump and Trump supporters.” https://bit.ly/2M78Ygu

FiveThirtyEight’s Politics Podcast. In this episode of the FiveThirtyEight Politics podcast, ABC News White House Correspondent Karen Travers joins the crew to discuss Donald Trump’s presidency, how he changed politics and what the lasting effects will be. https://53eig.ht/2XVe4PJ