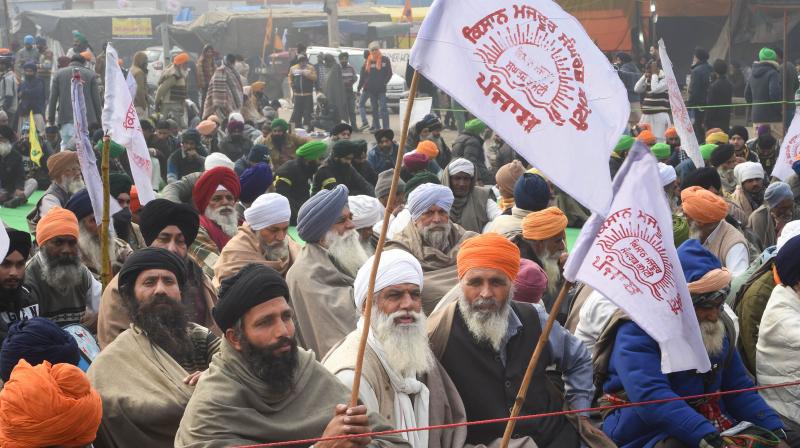 New Delhi: The farmers’ unions protesting against the Centre’s agricultural reform laws on Sunday decided to go ahead with their proposed tractor parade in the national capital on Republic Day. The decision by the unions has come just a day before the Supreme Court will hear the Centre’s petition seeking an injunction against the proposed tractor rally or any other kind of protest that seeks to disrupt the celebrations on January 26.

At the Singhu border, where the farmers have been protesting for over 50 days, Swaraj India leader Yogendra Yadav said the farmers will hold the rally and hoist the tricolour on their tractors on Outer Ring Road on Republic Day. He said the rally will be “very peaceful” and there will be “no disruption” of the Republic Day parade.

Kisan Sangharsh Samiti (Haryana) convener Mandip Nathwan, however, dispelled rumours that the protesters would unfurl the tricolour at Red Fort and that the tractors and tanks will roll together on Republic Day. “It’s being said farmers will unfurl tricolour at Red Fort and tractors and tanks would roll together (on January 26). No such programme has been finalised by the morcha. Such statements are not in the interests of farmers,” he said.

Union agriculture minister Narendra Singh Tomar said most farmers are in favour of the new laws and the government will hold the next round of discussions with them on Tuesday, All India Kisan Sabha (AIKS) general secretary Hannan Mollah accused the Central government of “dragging” things in a bid to tire out the farmers. He also called it a “conspiracy” by the government. Mr Mollah said: “For almost two months, we are suffering and dying in cold weather. The government is giving us ‘tarikh pe tarik’' and are dragging things out so that we get tired and leave the place. This is their conspiracy.”

Farmers leader Darshan Pal Singh accused the National Investigation Agency (NIA) of filing cases against those who were part of the protest or supporting it. “All the farmers’ unions condemn this,” he said, referring to the NIA summons reportedly issued to a farmers’ union leader in a case related to the banned Sikhs For Justice outfit.

So far, the government and the farmers’ unions have failed to resolve the impasse during their nine rounds of negotiations. The agriculture minister, however, claimed that most farmers and experts were in favour of the new farm laws. He said: “After the Supreme Court’s order, the laws can’t be implemented… Now we expect the farmers to discuss the laws clause-wise on January 19 and tell the government what they want other than the repeal of the laws.”

A three-judge bench headed by Chief Justice of India Sharad Arvind Bobde will hear the Centre’s application on Monday, along with pleas raising the issue of farmers protesting at Delhi’s borders. The Central government, in an application filed through the Delhi police, has said any proposed rally or protest, which seeks to disrupt and disturb the Republic Day celebrations will cause an “embarrassment to the nation”.

The Supreme Court had on January 12 stayed the implementation of the contentious new farm laws till further orders and constituted a four-member committee to make recommendations to resolve the impasse over them between the Centre and the farmers' unions protesting at Delhi’s borders. Days after the court’s order, Bhupinder Singh Mann, Bhartiya Kisan Union president and member of the All India Kisan Coordination Committee, who was part of the court-formed committee, had recused himself from the expert panel.