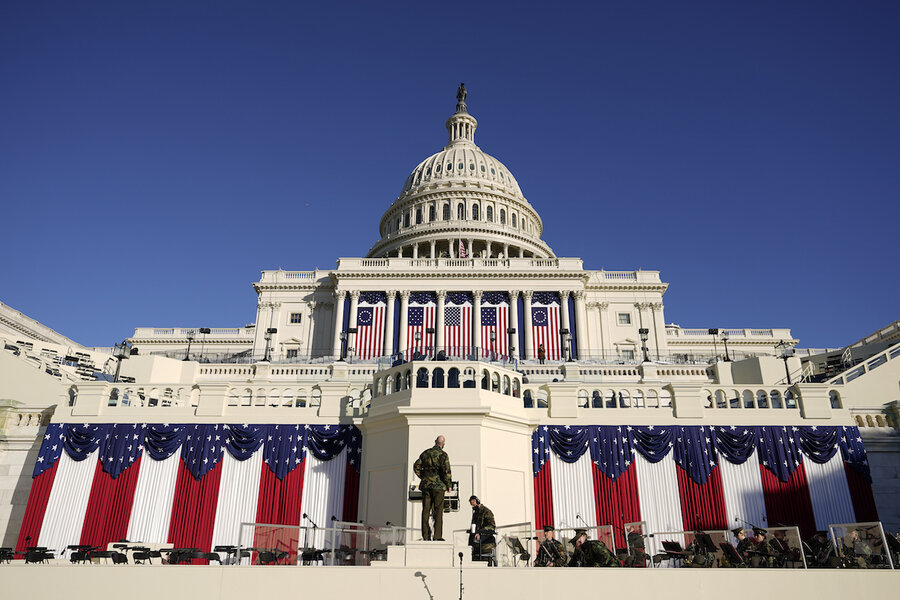 Inauguration Day for President-elect Joe Biden will look unlike anything the nation has seen before as the scars of COVID-19 and the Jan. 6 insurrection at the U.S. Capitol turn the West Front into a virtual ghost town compared to years past.

Here’s what to watch for on Inauguration Day.

Mr. Biden’s oath of office is the only essential. The Constitution sets out a 35-word oath for the new president. Some presidents make it 39 by tacking on “so help me God.” There are conflicting stories about when the ad lib started. Some say George Washington added the words when he took the oath at his 1789 inaugural. Others say the first eyewitness account of a president using those words came at Chester Arthur’s inauguration in 1881. Regardless of who started the add-on, every president since 1933 has done it.

Among the celebrities who will bring star power to Mr. Biden’s inauguration are Lady Gaga, who will sing “The Star-Spangled Banner,” and Jennifer Lopez, who will give a musical performance.

A president’s inauguration speech is designed to set the tone and the policies the new administration will pursue. Mr. Biden’s speech will focus on how he will seek to make good on the theme he has chosen for the inauguration, “America United.”

As the Jan. 6 insurrection at the Capitol showed, the challenge before him is daunting.

Who won’t be there

President Donald Trump has opted not to attend the inauguration, becoming the first president to do so since Andrew Johnson in 1869. The tradition of a president attending his successor’s inauguration began with George Washington and projects to the country and the world that America is transitioning to new leadership freely and in peace.

Mr. Biden and Ms. Harris are urging supporters to stay home because of the coronavirus pandemic. The National Mall is closed and just a fraction of the tickets usually handed out for an inauguration will be distributed.

About 200,000 small U.S. state and territorial flags have been installed on the National Mall, representing those who can’t attend.

A few lawmakers from both parties have indicated that they will not be attending out of safety concerns following the Jan. 6 attack on the Capitol.

Who will be there

Vice President Mike Pence and most members of Congress are expected to attend. The lawmakers can bring one guest. In previous inaugurations, lawmakers scored hundreds of tickets to distribute to friends, donors, and constituents.

Security forces in and around the Capitol and the White House are expected to widely outnumber inauguration guests. After the insurrection at the Capitol by Trump followers as lawmakers confirmed Mr. Biden’s victory, about 25,000 National Guard were being brought into the nation’s capital.

The new president will make his way to the other side of the Capitol for the long-standing tradition of the new commander in chief inspecting the troops. The Pass in Review ceremony is designed to reflect the peaceful transfer of power. Every branch of the military will be presented, though this year’s participants will socially distance to deter the spread of the virus.

The traditional congressional lunch won’t occur because of COVID-19 concerns, but Mr. Biden is expected to take care of some business before leaving the Capitol.

After the Pass in Review ceremony, the Bidens and Ms. Harris and her husband, Doug Emhoff, will participate in a wreath-laying ceremony at Arlington National Cemetery’s Tomb of the Unknown Soldier. The former presidents and first ladies will join them.

What about the parade?

The traditional inaugural parade down Pennsylvania Avenue has been dramatically scaled back. Instead, after visiting Arlington National Cemetery, Mr. Biden will receive a presidential escort – and a short one, at that. It will extend just a few hundred yards to the White House rather than the 1.6-mile route of previous inaugurations. The proceedings will provide the world with the images of Mr. Biden going to his new home without attracting large crowds. Again, every branch of the military will participate in the escort, and the marchers will socially distance.

Virtual parades will be televised and feature performances from around the country. The inaugural committee says the programming will include musical acts, local bands, poets, and dance troupes. An emphasis will be placed on paying homage to Americans on the front lines of the pandemic.

In past inaugurations, participants would don their tuxedos and ball gowns and attend one of the many inaugural balls and galas taking place around town. This year, state Democratic Parties and advocacy groups will hold virtual balls.

According to producers, the program “will showcase the American people’s resilience, heroism, and unified commitment to coming together as a nation to heal and rebuild.”