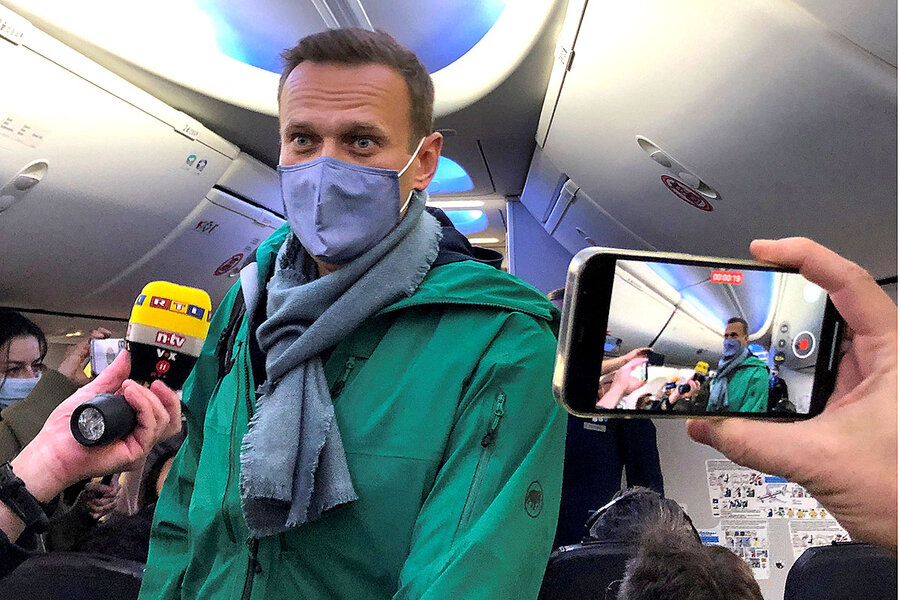 A very Russian political spectacle is unfolding with the return of irrepressible dissident Alexei Navalny to his homeland and his subsequent, highly personal challenge to President Vladimir Putin.

Mr. Navalny is calling for millions of Russians to take to the streets on Saturday to oppose corruption and injustice, and to fight for freedom against Mr. Putin and the now-rattled Kremlin. “Staying at home on this day means accepting that the villains will continue to lie, steal, and kill,” says the appeal on his website.

It’s a huge gamble for Mr. Navalny, whose personal courage and political flair have captured the attention of the Russian public, if not mass support, and left the Kremlin scrambling to keep up.

Despite facing a potentially long prison sentence, he blindsided authorities by returning to Russia from Germany this week, where he had been recovering from Novichok poisoning, allegedly at the hands of Russia’s FSB secret police. Arrested at the airport, he managed to keep in touch with supporters via social media, and even released an investigative video that accuses Mr. Putin of owning a lavish secret palace near the Black Sea.

The political tensions have the flavor of other personal feuds in Russian history between an almighty ruler and a hopeless challenger whose main claim is to moral authority, as expressed in the long-ago correspondence between Czar Ivan the Terrible and his exiled nemesis, Prince Kurbsky. So too the vendettas between Josef Stalin and Leon Trotsky; Mikhail Gorbachev and Boris Yeltsin; and, in an earlier phase of the Vladimir Putin era, the Kremlin leader and the imprisoned tycoon Mikhail Khodorkovsky.

“Russian politics is a very personalized business, and it is built not around ideas or platforms but around charismatic individuals,” says Vladislav Inozemtsev, an expert with the Center for Strategic and International Studies in Washington. “Mr. Navalny is definitely one of them, but he behaves in many respects not as one who is different from Mr. Putin but rather as one who resembles him too much.”

Mr. Navalny “is respected because he’s young and brave, but that’s not enough to succeed,” Mr. Inozemtsev says. “In his dissent with the current system he went too far to be tolerated. And in Russia, one doesn’t need to be guilty to be sealed away in prison.”

Long a thorn in the side of Russian authorities for his powerful video exposés of official corruption and his seemingly quixotic political challenges to the Kremlin, Mr. Navalny has personally accused Mr. Putin of ordering his poisoning. He returned to Russia this week apparently in anticipation of a showdown, and is clearly throwing down the gauntlet in his call for mass demonstrations.

“Navalny is unique among Russian political figures in defying the risk to his life,” says Masha Lipman, editor of Counterpoint, a journal of Russian affairs published by George Washington University. “He probably believes that all his risks and troubles will pay off eventually, and he will become president of Russia. He raises the stakes, over and over, as he did by returning to Russia, and publishing this video about Putin personally.

“What he is doing lies beyond rational political calculation,” she says. “He is following his lodestar, his deep belief that he can make change happen.”

Andrei Prokudin, a pro-Navalny activist in the western Russian city of Tver, says Mr. Navalny’s example is one to be followed.

“I can’t help but go out into the streets [on Saturday] because Navalny knew perfectly well that they would want to put him in jail, but he was not afraid to return to Russia. We can’t be afraid either,” Mr. Prokudin says. “When the state wants to put Navalny in prison, it wants to silence not only him but all of us. So, I hope a lot of people will show up and we will put enough pressure on Putin to force him to release Navalny.”

Opinion surveys do not suggest that Mr. Navalny commands enough public support to tip the political scales this weekend, or anytime soon.

One comprehensive poll, conducted by the independent Levada Center last September after his poisoning, found that public awareness of Mr. Navalny had grown significantly, and that approval of his actions had risen from 6% seven years earlier to 20%. But disapproval also jumped over the same period, from 35% to 50%.

While most were aware of the poisoning allegations, and a plurality believed Russian officials were probably to blame, there was little in the detailed answers given by Russians to suggest any surge in active support for Mr. Navalny.

“Navalny’s name is now familiar to everyone, but he doesn’t have millions of supporters,” says Dmitry Oreshkin, head of the Mercator Group, an independent Moscow political think tank. But even those he does have “don’t think it’s worth donating money to him and they are scared to attend protests in his support. People today don’t live so poorly that they will take such risks.”

Nor are Russians very well acquainted with Mr. Navalny beyond his defiant political persona. His political convictions and program are obscure, as are the sources of his support. His often explosive exposés of official corruption clearly lean upon materials provided to him by insiders.

Despite being arrested 12 times over the past decade and being placed under house arrest, Mr. Navalny was able to travel around the country and engage in political organizing right up until his poisoning last August.

Sergei Markov, a former Kremlin adviser and staunch Putin supporter, claims that Mr. Navalny has been protected over the years by members of Russia’s top elite who secretly oppose Mr. Putin, or are seeking to settle scores with elite rivals.

“There are powerful groups in Russia’s ruling class who are publicly pro-Putin, but privately have never accepted Putin’s hostile relations with the West,” says Mr. Markov. “These people protect Navalny, feed him materials for his anti-corruption stories, and help him in other ways. But that is all over now. Navalny has gone too far and there will be a united approach to dealing with him.”

Other analysts argue that the impression of monolithic Kremlin control is illusory, and that different factions of the government and security services differ over how to handle Mr. Navalny.

During Mr. Navalny’s return to Moscow this week, his plane was diverted from one airport to another, and he was subjected to a hearing in a makeshift courtroom set up in a police station – while he live-blogged the event on social media. Some say this reflects a state that seems panic-stricken or unable to muster a coherent response.

“There is no systematic approach,” says Gleb Pavlovsky, a former Putin adviser turned critic. “They act like this because there are different departments that are not on the same page about what to do. Lately Putin doesn’t seem able to consolidate them, so they act independently and the result looks like chaos.”

Ms. Lipman argues that the Kremlin is evolving into a more repressive regime, and that is why the issue of how to handle Mr. Navalny is coming to a head.

“This explains why Navalny could get away with all he did in the past,” she says. “Formerly, the regime thought that Navalny running around doing his things was better than Navalny behind bars. No more. They wanted Navalny dead, and now they’ve decided to have him locked up for years.”