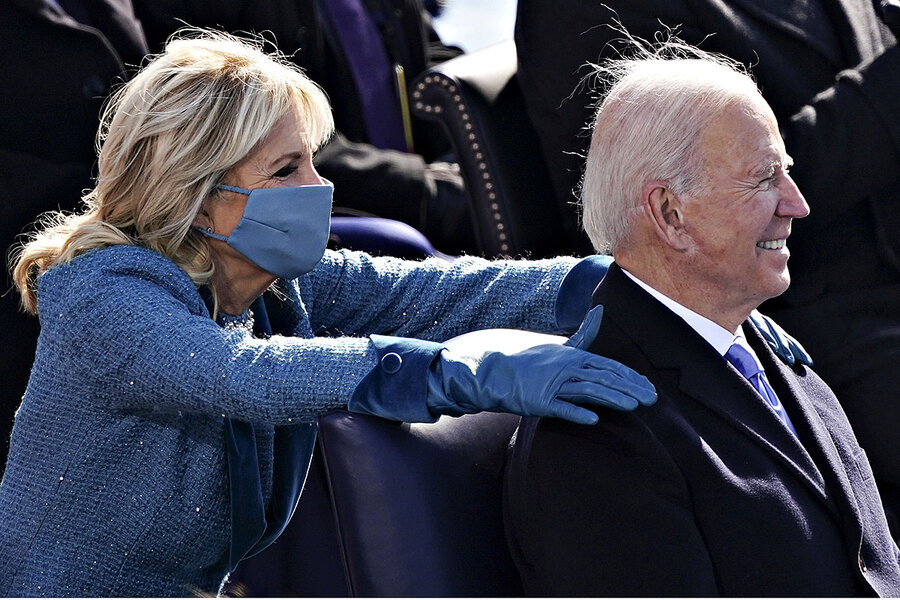 Inauguration Day is an aspirational time for Americans, a time to look ahead to the next four years and imagine new possibilities – regardless of one’s politics. Given the urgency of the nation’s crises, there is no shortage of ideas. Today’s Monitor presents “Dear Mr. President,” advice from 10 prominent thinkers for President Joe Biden.

On this day, it was especially heartening to see politicians from both sides of the aisle witnessing the swearing-in of President Biden on the steps of the Capitol. Just two weeks ago, that same building was the scene of a deadly incursion by a mob that sought, somehow, to block the president-elect from taking office.

Outgoing Vice President Mike Pence attended Mr. Biden’s inauguration. But the man he loyally served for four years did not. This morning, now-ex-President Donald Trump flew to his home in Palm Beach, Florida, making him the first outgoing U.S. president to skip his successor’s inauguration in 152 years. Former President Trump didn’t go quietly. At Joint Base Andrews, before boarding Air Force One, he was treated to a 21-gun salute and delivered a farewell address to about 500 supporters.

“We will be back in some form,” Mr. Trump pledged.

What that means is anyone’s guess. Will he run for president again in 2024? Perhaps he will start a new political party, as he has reportedly discussed. Or maybe he’ll launch his own TV network. The latter two seem unlikely, as they would both require major financing and organization.

Regardless, Mr. Trump will continue to make headlines. He faces considerable debts as well as legal jeopardy. Then there’s the impeachment trial in the Senate, expected soon, over his alleged role in helping incite the Capitol riot on Jan. 6. Conviction, which seems unlikely, would bar him from running for office again.

In the hours leading up to his departure, Mr. Trump made other waves. He issued pardons and commutations to 144 people – including former aide Steve Bannon, rapper Lil Wayne, and the ex-husband of Fox News host Jeanine Pirro – but declined to issue himself or family members a prospective pardon. Mr. Trump also revoked his own ethics rule barring federal appointees from lobbying their former agencies for five years.

Mr. Biden, for his part, sought a reset after a turbulent four years.

“Let’s start afresh, all of us,” he said in his inaugural address. “Let’s begin to listen to one another again.”