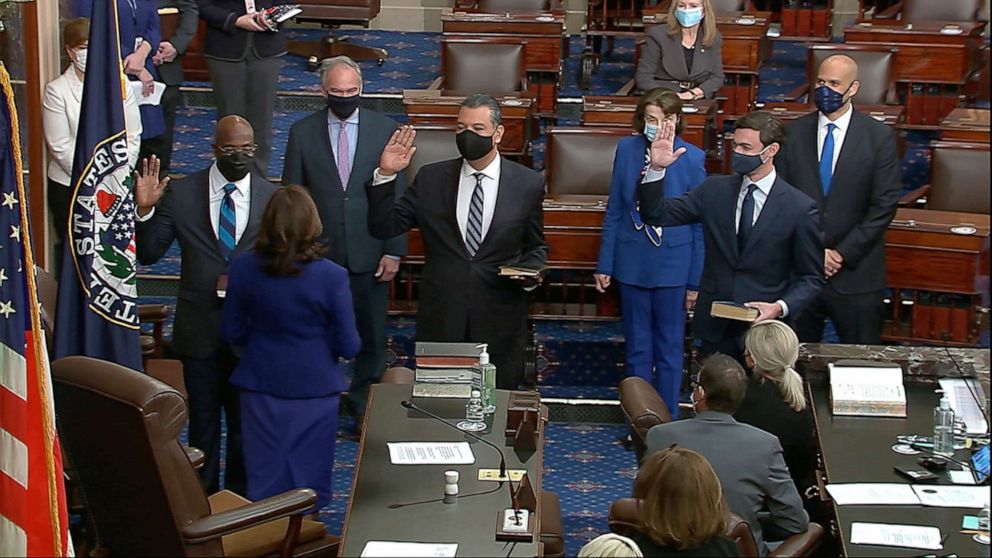 Just hours after Kamala Harris’ own historic swearing-in as vice president, she ushered in three other historic firsts as she swore in three new senators.

Harris received a standing ovation as she walked into the Senate for the first time as vice president on Wednesday afternoon.

At the same time, she also administered the oath of office to Georgia’s newest senators, Rev. Raphael Warnock and Jon Ossoff.

Warnock, who is minister at the same Atlanta church where the Rev. Martin Luther King Jr. preached, becomes Georgia’s first Black senator. Ossoff becomes the first Jewish senator from Georgia and at 33 is the youngest Democrat elected to the Senate since Joe Biden was elected in 1972.

The moment Warnock and Ossoff were sworn in also marked the moment Democrats officially took control of the Senate.

The Georgia Democrats give the legislative body a 50-50 split, but Democrats will hold control with Harris as the tie-breaking vote.

When Harris resigned from her Senate post on Monday, she wrote in an op-ed for her local newspaper, The San Francisco Chronicle, that she intends to fulfill her “constitutional duty” as the tiebreaker, but hopes that lawmakers will find common ground to pass legislation.

“I intend to work tirelessly as your Vice President, including, if necessary, fulfilling this Constitutional duty,” Harris wrote. “At the same time, it is my hope that rather than come to the point of a tie, the Senate will instead find common ground and do the work of the American people.”