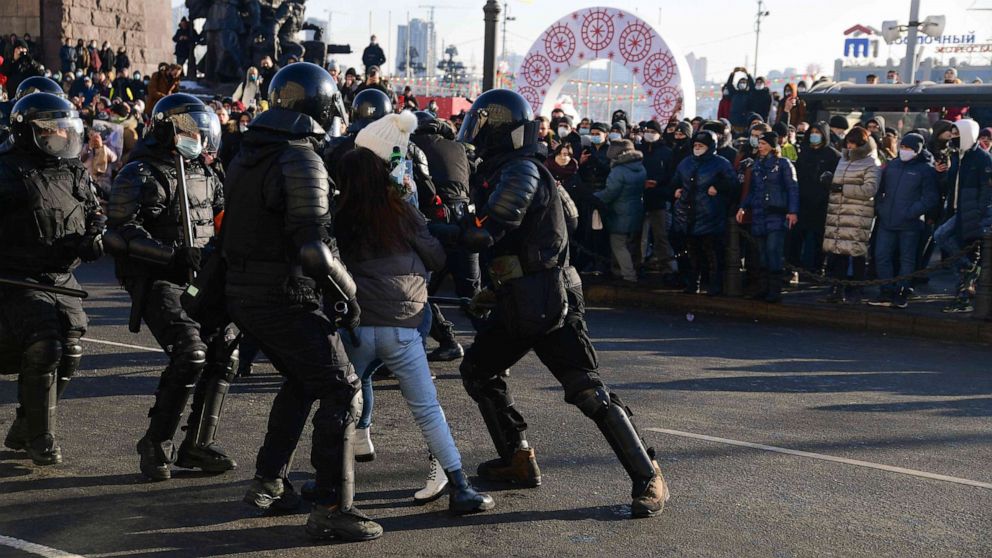 Tens of thousands of people have joined protests across dozens of cities in Russia, demanding the release of the Kremlin critic who was jailed last week after he returned to the country for the first time since recovering from a poisoning with a nerve agent.

The protests were one of the largest displays of popular opposition to the rule of president Vladimir Putin in years, mushrooming in almost every large city across Russia and attracting unusually big crowds. Almost everywhere, the protesters were confronted by heavily armored riot police who moved to disperse them.

By early evening, police had detained over 1,600 people, according to OVD-Info, a group that monitors arrests, and that number seemed likely to grow.

In Moscow, Navalny’s wife, Yulia Navalny, was detained at the protest, where lines of riot police later dispersed the crowd with batons.

Navalny had called for the nationwide protests on Saturday after authorities sent him to prison a week ago, setting up a test of the strength of Navalny’s support in the country, following his poisoning and return to Russia.

Protests were held in almost every large city, beginning first in Russia’s far east that is seven hours ahead of Moscow and then continuing throughout the day, spreading across Siberia until reaching cities on the border of Europe. Videos posted online showed crowds– ranging from several hundred to a few thousand– gathering in groups or marching in long processions, chanting slogans like “Putin is a thief”.

In Moscow, part of the city center was flooded with thousands of people. It was hard to judge the size of the crowd, but Reuters estimated it at 40,000. Moscow’s police, who commonly undercount crowd size, said it was just 4,000.

In the far eastern city of Vladivostok, a crowd of around 3,000 people gathered. Videos posted on social media show riot police officers charging at demonstrators with batons.

In many large eastern cities and in Siberia, videos posted online show long processions of people marching and chanting slogans such as “Putin is a thief.”

The protests, although not huge outside of Moscow, were still remarkable for their size and geographic spread, stretching into regions normally indifferent to Navalny.

Navalny has traditionally had little pull beyond Moscow and St. Petersburg and his previous calls for nationwide protests have usually only seen small crowds of a few hundred in most regional cities.

Crowds, ranging from several hundred to a few thousand took to the streets in often biting cold. In the Siberian city Omsk, where an estimated thousand people marched the temperature was -20 degrees Fahrenheit. In Novosibirsk, videos filmed by local media showed riot police with steel shields chasing protesters onto a frozen lake.

In many cities, demonstrators pelted helmeted riot police with snowballs and in some places tussled in knee-deep snow.

Navalny has traditionally had little pull in Russia’s vast regions outside Moscow and previous calls for nationwide protests have previously seen only small crowds of a few hundred in most of the large regional cities. The marches on Saturday appeared larger than usual.

Ahead of the protests, authorities launched a wave of arrests, detaining activists at their homes, including several of Navalny’s top lieutenants. The prosecutor general’s office issued a warning that anyone attending the protests risked arrest, and opened a broad criminal case on charges relating to unauthorized public events.

Navalny’s support is strong among students, so universities and schools warned against attending, threatening expulsion.

Navalny is Russia’s best-known opposition leader and is viewed as president Vladimir Putin’s most troublesome political opponent. He has built a grassroots movement, galvanized by his investigations into alleged acts of corruption among powerful officials and businessmen close to Putin.

This week, a day after Navalny was jailed, his team released a new film claiming to lift the lid of an extravagant secret palace built by Putin on the Black Sea coast close to the city of Sochi. The film, which Navalny said is based on leaked blueprints, describes the interior of the palace, alleging it contains a personal casino, amphitheater, vineyard and even an underground hockey rink for Putin.

Since it was published on Monday, the almost two hour-long film has been viewed over 67 million times, more than any of Navalny’s other films which have previously led to street protests.

Navalny is currently in a jail in Moscow. He was detained at the airport almost immediately upon his arrival in Moscow last Sunday from Germany, where he had been recovering from the nerve agent poisoning that nearly killed him. He was then ordered to stay behind bars for at least 30 days by a makeshift court set up inside a police station, and could be sentenced to years in prison at a parole hearing later this month, on Jan. 29.

Police detained Navalny for allegedly violating the terms of a suspended sentence from 2014, when he was found guilty of embezzlement in a trial that the European Court of Human Rights later found was unjust. Russia’s prison service has requested that his three and a half-year sentence be converted into real prison time.

Many observers believe the Saturday protests could deter the Kremlin from imprisoning Navalny for a lengthy period of time.

Though Navalny has been jailed before due to his acts of activism, he has never been imprisoned long, likely because the Kremlin has never wanted to risk the political fallout that could come from putting his biggest opponent behind bars.

But after learning of Navalny’s mysterious poisoning, some observers believe that calculus may well have changed.

The Kremlin has denied any involvement in Navalny’s murder attempt, but an investigation by the independent group Bellingcat in December found evidence identifying an alleged hit squad from Russia’s domestic intelligence agency, the Federal Security Service or FSB, that trailed Navalny for years and was present in Siberia when he fell sick in August. Navalny himself has published audio from a phone call with one of the alleged team members, in which the agent appears to unwittingly acknowledge the plot.

Navalny on Friday released a statement from jail via his lawyers in which he said he was feeling well and if anything were to suddenly happen to him while in jail, it should be treated as foul play.

“Just in case, I declare: My plans don’t include hanging myself on a prison’s window bars, or open my veins or cut my throat with a sharpened spoon,” Navalny said in the statement posted on Instagram. “I’m being very careful walking downstairs. My blood pressure is measured every day, and it’s like a cosmonaut’s, so a heart attack is excluded.”