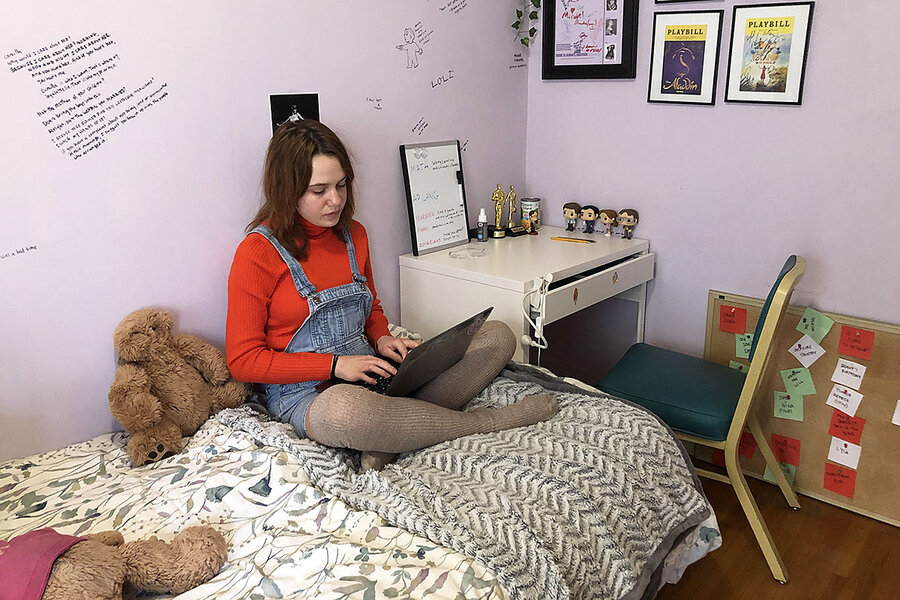 One group of students is called the Golden Barrels, another Prickly Pears. For seventh graders in Jennifer Cale’s language arts class, this year’s theme is the cactus.

“They wrote all these metaphors about how they needed to be resilient like a cactus, and they needed to thrive in harsh conditions,” says Ms. Cale, whose Renton, Washington, school turned to remote learning last spring.

That writing prompt helped them conclude that if they stuck through it, she explains, “they were going to bloom like the cactus.”

Ms. Cale’s students seem to have taken the theme to heart. On top of their good academics, she reports near-100% daily attendance online – on par with her pre-pandemic classes.

Resilience is more necessary than usual as districts in cities from Los Angeles to Detroit face decisions about whether to reopen or continue teaching remotely due to the pandemic. For months, distance learning has tested the mettle of families and school staff alike. It will likely linger through the spring in some places, although President Joe Biden is pledging to help get students back in classrooms quickly. In spite of the challenges, educators, parents, and students report silver linings: Some learners are thriving online.

For these students, remote models have meant more independence to work at their own pace, flexible formats for learning differences, or relief from social stressors. While research on student achievement since last March is limited, there is anecdotal evidence of remote learning success.

Maria Aguirre, whose ninth grader studies remotely in the Dallas-Fort Worth area, says she’s seen positive changes in her daughter since pre-pandemic school – and not just an upgrade from her usual B’s and C’s.

“She’s not as anxious all the time. … When she does her work, she’s more focused on it, and she gets it done,” says Ms. Aguirre. “She’s just a different person.”

For the 2020-21 academic year, about 60% of K-12 public school students began fully remote, consulting firm McKinsey & Company estimates, with white students more likely to study in person. Unequal access to digital devices and the internet have posed barriers to learning, and many students aren’t showing up for school. Educators are monitoring attendance and learning loss, with particular concern for students of color.

“Hopefully we come out with new ideas about what engagement and motivation and building connections can look like at a distance,” says Nate Schwartz, professor of practice at the Annenberg Institute for School Reform at Brown University and co-founder of EdResearch for Recovery.

Learners with access to adults who are able to provide guidance during remote learning hours are faring relatively well, administrators say, though this arrangement isn’t practical for all. “Those students are finding a little more success with this than students whose family members are working, regardless of socioeconomic status,” says Niki Hazel, associate superintendent at Montgomery County Public Schools in Maryland.

While teacher effort should be included in discussion of students’ virtual success, she says, introverts and independent-minded students have also performed particularly well.

“We find that the students who can advocate for themselves … tend to do well in this environment,” says Ms. Hazel.

“He has complained to me for years that there’s so much wasted time at school. … He’s a quick learner,” says his mom, Nancy, who requested they be identified only by first names for privacy.

During breaks in his virtual day, Beckett rewards himself for completing work by drawing cartoons and practicing trumpet and saxophone. “He’s just really happy having that time back,” his mom says.

For Maggie H., a parent in the St. Louis area who has twin 12-year-olds with autism, keeping track of social and emotional development is important. Online learning, however, has offered relief from a range of school stressors for her sons.

The twins are rattled by the sensory shocks of hallway jostling, alarm bells, the stress of catching the bus, she says. Before middle school began, the family had been planning how to navigate the boys through the school building – until their opt-in virtual attendance was confirmed to start in August.

On Zoom, one twin, who is diagnosed with attention deficit hyperactivity disorder, “can really super-focus,” Maggie says.

“He doesn’t have a kid poking on him, or the light fixture blinking in the classroom, or the fear that an alarm is going to go off when an announcement’s made,” she says. On the other hand, he’s no longer distracting his classmates with his sound and movement needs, she adds.

Before the pandemic, Maggie, who asked to be identified by first name only for her children’s privacy, says the preteen’s peers bullied him due to his differences. He started disengaging from class, she says, or would say, “I don’t want to go to school.”

He and his brother’s renewed love for school has been another bright spot as their academics shine. They used to arrive home in the afternoons “exhausted just making it through the school day,” their mom says. Now, over meals and neighborhood walks, they discuss class highlights and teach Maggie about ancient Mesopotamia.

“There’s joy in their learning,” she says.

Nkomo Morris, a learning specialist and guidance counselor at a New York City public high school serving mainly low-income students, has also noticed an unexpected improvement in some students with ADHD. In the comfort of home, they can move around freely and not worry about sitting quietly while getting their work done.

“No one minds or gets frustrated if they switch from task to task with rapidity and lots of noise,” she says. “They can just mute themselves.”

She hopes schools retain some positive changes that have emerged from the pandemic, such as flexible teaching approaches and smaller class sizes. “This is stuff that we teachers have been advocating for,” Ms. Morris says.

Bonding with family – and Jane Austen

Online learning has been a welcome change for high school junior Kate Heffernan in Glendale, California. A self-described “huge introvert,” Kate says she first found relief from the social pressures of school when her studies shifted online last April.

One study by the Institute for Family Studies and the Wheatley Institution, which surveyed more than 1,500 American teenagers between May and July last year, found that 53% reported becoming stronger and more resilient. More sleep and family time are contributing factors, the research suggests.

“I’ve been able to appreciate myself and learn more and discover who I am, without the context of my friends and high school,” says Kate, who has relished sleeping late, connecting with family, and reading all of Jane Austen’s books.

Ameerah Dozier, an eighth grader in Capitol Heights, Maryland, says she especially missed socializing at school. But as weeks wore on, she began to settle into a new routine, one that included being able to spend more time with family. “It just felt like I was getting my bond back with my mom,” she says.

Other students find momentum in hybrid models. In Edgard, Louisiana, Cassandra Silas has watched her eighth grader’s grades improve after what she calls a “rocky” start to the virtual fall. Without much computer use in previous school years, he began online lessons with a tech learning curve.

“The beginning of the year was kind of hard. … It was all new to us,” says her son Alton Sarrazin III.

Alton’s grades rose as he became more accustomed to the technology, says Ms. Silas. A switch to a two-day-in-school hybrid model in December also seemed to accelerate his drive. Now Alton says he finds himself procrastinating less.

“I think being in a classroom gives you motivation,” instead of studying only online, says the teen.

“The line of communication is a straight shot now,” she says. “I can do a parent-teacher conference from my work desk.”

Parents like Maggie in Missouri hope the upsides of remote learning will inspire schools to create more flexible environments when all students are welcomed back.

After all, she says, “We’ve learned that we can do it differently.”