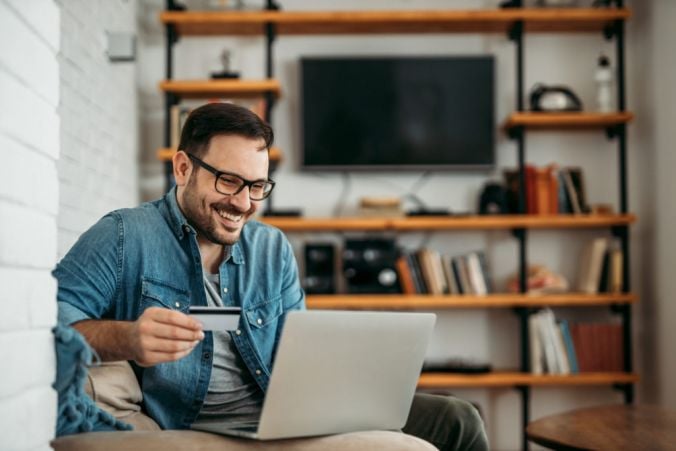 Man at home internet shopping on a laptop

The temptation to turn to impulse spending for a quick pick-me-up may be particularly strong right now, with little else going on to lift the spirits. Plus, with everyone stuck at home, it’s easier to hide those splurges.

Most of us have used shopping as a way to cheer ourselves up or reward ourselves at some point or other, according to a survey of more than 2,000 people from app-based bank, Atom.

But the emotional lift we’re looking for may only be short-lived, as nearly seven in 10 (69 per cent) spenders confess they end up feeling guilty afterwards. And with many households having to stretch out reduced incomes, impulse spending is something some just can’t afford right now.

Edward Twiddy, chief customer officer at Atom bank, says: “With the huge changes we’ve seen in the financial climate as a result of Covid-19, it’s more crucial than ever for people to understand their finances and how to get the most out of their earnings.”

So, how can you resist the urge to splurge? Atom has teamed up with Mario Weick, a behavioural psychologist at Durham University, to share some top tips for spending wisely and avoiding the temptation to make impulse buys…

1. Focus on a future goal

If you struggle to avoid temptation, one of the best ways to control your urges is to focus on a future goal that saving your money could lead to, whether that’s saving up for driving lessons or taking a step onto the property ladder.

“The benefits of saving money materialise over time, so focusing on a future goal can make it easier to save money, whereas focusing on the here and now may encourage spending,” says Weick.

People with #MentalHealth problems are 3.5x more likely to be in problem #debt – but the stigma around mental health & financial difficulty can make it harder to ask for help. We want to change this – find out more here: https://t.co/ZejlwEPwvu pic.twitter.com/pTHpTNUOab

2. Avoid shopping when tired or under the influence of alcohol

“Impulsive behaviour can be triggered by things such as tiredness, alcohol, or information overload,” warns Weick.

Browsing your favourite online sites when you’re super tired at the end of a stressful week of work, or after a couple of glasses of wine, can lead you to make purchases without fully thinking them through.

Be mindful of only shopping when you feel fully alert and rested. And for added benefit, get into the habit of taking the time to mull a purchase over for at least a few hours – ideally longer – before heading to the virtual checkout.

3. Reduce your exposure to temptation

“It may sound simplistic, but one way to alleviate the pressure is to reduce one’s exposure and avoid the situation, if possible,” says Weick.

Doing some form of exercise instead, such as walking or following an online workout, may be a good idea.

This is backed up by research by Atom, which indicated that shoppers got the same physical ‘high’ from taking a brisk walk, as they did from hitting the checkout button.

If, after exercising, you’re still keen on making the purchase when your heart rate returns to neutral, then it may be less likely that your body is just craving the endorphins that shopping can bring.

4. Ditch the ‘all or nothing’ attitude

When you’re trying to limit your spending, you can feel like going cold-turkey is the only answer, particularly after spending at Christmas. However, an ‘all or nothing’ attitude may actually be harder to maintain than a split-budget approach.

Weick suggests that striking a “healthy balance” between saving some income and also allowing some spontaneity may help.

✅Follow these 10 steps to ensure your household budget stays up to date and your spending remains under control.https://t.co/exR9uu104Y

5. Spend for long-term happiness, rather than a ‘quick kick’

Weick suggests spending is more likely to bring happiness when the purchase is intrinsically rewarding, such as on life experiences, personal development or on gifts that nurture meaningful relationships, “rather than those driven by superficial motives”.

Take this time to work out what you want to gain from your purchases. Make sure you’re not only shopping for the sake of it, or to experience the excitement of grabbing a ‘bargain’.

Reflecting on whether your purchase will bring you long-term happiness will help lower the risk of spending on things that only have a short-term impact.

What is cottagecore and how can you use it to transform your home?