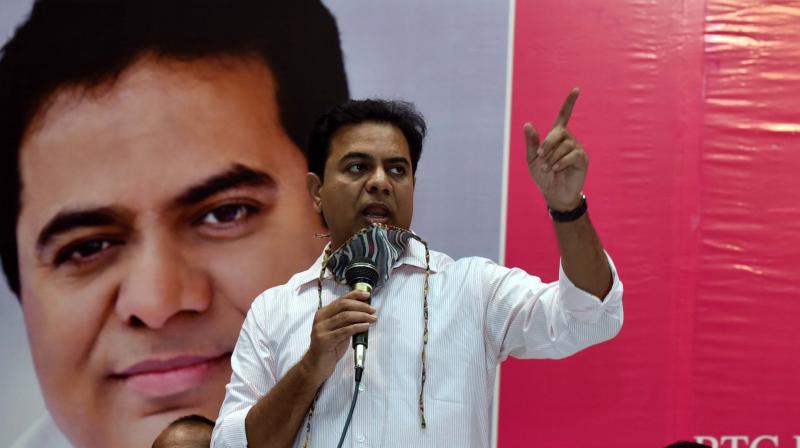 Hyderabad: With changes imminent in the political scenarios of the state across political parties, an interesting thing emerges from the three main political parties in Telangana: it is inevitably time for the generation next to lead their respective parties for the battle royale.

If the Telangana Rashtra Samithi supremo K. Chandrasekhar Rao does indeed anoint son and minister K.T. Rama Rao as the next Chief Minister in the state, a young KTR will lead his party to fight the 2023 assembly elections in the state.

He is already in control of the party as its working president and did lead the charge for the ruling pink party in the Greater Hyderabad Municipal Corporation elections in both 2015 and 2020.

While the former was a highlight and a highpoint of his career so far, the latter must have given him a good sense of the kind of fight to expect from the opposition, in particular from the BJP.

The dominant national party, the Bharatiya Jana Party has appointed an aggressive young leader and a fighter, Karimanagar MP Bandi Sanjay Kumar as president of its state unit. This has shown immediate results and a successful narrative has been set that the BJP has replaced the Congress in the state as the principal opposition to the ruling TRS.

The BJP has further consolidated a perception that there is a strong anti-incumbency against the TRS, in particular against the Kalvakuntla family and the saffron party, as the unifying fulcrum of such anti-TRS force will form the next government in Telangana.

In particular, after Mr Sanjay took over the mantle of leadership of his dormant if nor moribund party, and surprised everyone by leading it to a victory in the Dubbaka Assembly by-poll. It also delivered a stunning performance and became the second largest party in the GHMC, and pushed the TRS into a corner over formally creating an alliance to get a mayor by denying it the simple majority in the municipal council.

The BJP’s top leadership was highly impressed by the turnaround in the party’s fortunes in the state led by Bandi’s aggressive attacks on the TRS government. The party central leadership has backed him strongly since, including putting up a rooster of top notch speakers for the GHMC campaign. It is, therefore, moot to even discuss under whose leadership the BJP will fight the next state polls, in which they hope to dismantle the TRS.

Incidentally, the MIM has been led by a youthful leader for a long time, Asaduddin Owaisi, who has emerged as a national leader, especially since 2014, where he is increasingly being seen as someone who has expanded his party and increasingly become the most important voice and representative of Muslims across the country.

The final piece on the board is the fledging and shrinking national party and the instrumental force in creation of separate Telangana – the Congress. The principal opposition party in the state when last Assembly poll results came out, the Congress party is still vacillating on the next leader, who will likely replace incumbent Uttam Kumar Reddy.

However, after several rounds of consultation under high public glare, it looks like the two most enthusiastic aspirants and Lok Sabha MPs – A. Revanth Reddy and Komatireddy Venkat Reddy have been ruled out as PCC presidents by the high command.

In the process, the general secretary in-charge Manickam Tagore was reportedly admonished by party president Sonia Gandhi for bungling the exercise and for not having been above board and strictly neutral in the process. He was purportedly seen as biased and favouring Revanth Reddy, for which he was given an earful by the supremo.

With the ruling out also of several other leaders, old and young, from from Mallu Vikarmarka Bhatti to Ponnam Prabhakar to Sridhar Babu, the race is now largely limited to two seniors without ruling out a dark horse – MLC Jeevan Reddy and Marri Shashidhar Reddy. Between the two, while the former has age and health working against him, besides the fact that he was formerly in TDP, where Shashidhar Reddy, with a clean image, strong intellectual prowess and strategic sense, has an edge.

Either way, whoever the leader, the new PCC president will complete the local quad – along with KTR, Bandi Sanjay and Owaisi as the other three.

With new leaders at the helm, a more aggressive brand of politics will play out, with greater stakes. A generational change in surely underway. KCR belonged to a different league, being more contemporary with the likes of N. Chandrababu Naidu and late Y.S. Rajashekhara Reddy.

As of today, K.T. Rama Rao has crossed 44 years of age while Bandi Sanjay is 49 years. Asaduddin Owaisi is 51 years, his younger brother and leader of MIM in state Assembly Akbaruddin Owaisi is just a year younger.

Had MPs Revanth Reddy or Komatireddy been in the race, they would have been in the pack at 51 and 56 years respectively, but current favourite Jeevan Reddy and Shashidhar Reddy are in their sixties. But once Indian National Congress appoints Rahul Gandhi as president of as is expected, he will, at 51, make it a fight to remember of generation next of politics.