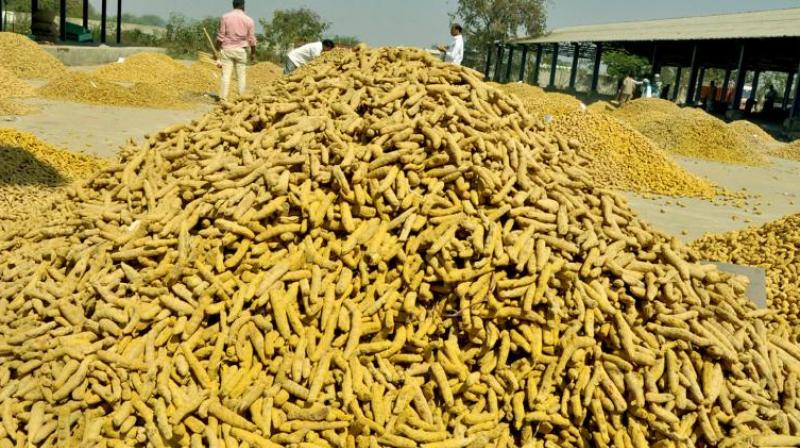 NIZAMABAD: The issue of establishing Turmeric Board in Nizamabad has once again come to the fore as farmers are preparing to intensify their agitation with regard to this two-decade-old demand.

Farmers of undivided Nizamabad and Karimnagar districts had participated in a series of agitations demanding establishment of Turmeric Board in Nizamabad. It may be mentioned that both Nizamabad and Karimnagar MP seats had been won by BJP after their candidates intensely campaigned about the failure of then-incumbent Nizamabad MP Kalvakuntla Kavitha of TRS failing to get the Turmeric Board established in the town. 178 farmers had even filed their nomination papers to contest from the Nizamabad Lok Sabha to make matters difficult for Kavitha, daughter of Chief Minister K. Chandrasekhar Rao.

The farmers are now targeting Nizamabad MP Dharmapuri Arvind of BJP on his failure in getting the turmeric board to the town. Now MP, Arvind had as a contestant promised on a bond paper that he would ensure that a Turmeric Board is established in Nizamabad if he wins. BJP was in power at the centre at the time. Farmers of Nizamabad and Karimnagar districts have been demanding since the past two decades that a separate Turmeric Board be established in Nizamabad. They have repeatedly expressed displeasure over the Spices Board having only a regional office in the town.

In this context, farmers who are sympathisers of TRS on Friday demanded the resignation of BJP’s Arvind as MP. Speaking to newsmen at the Velpur market yard, they accused the saffron party parliament members from Nizamabad and Karimnagar of betraying turmeric farmers. “MP Arvind signed on a bond paper promising that he will bring the Turmeric Board within five days after his victory in Parliament elections”, recalled one of the farmers demanding the resignation of MP from the Lok Sabha.

However, sympathisers of BJP within the farmers are holding a meeting at Chowtpally village in Kammarpally mandal on Saturday. MP Arvind and select BJP leaders will participate in this meeting. Surprisingly, BJP leaders are now seeking a letter from the TRS government promising minimum support price (MSP) for turmeric. This has left a vocal section of farmers dumbfounded. They are further flabbergasted that BJP leaders are now justifying existence of the regional office of Spices Board in Nizamabad, instead of demanding a separate Turmeric Board.

Meanwhile, TPCC working president and Congress Lok Sabha member A. Revanth Reddy will observe a Rythu Deeksha in Armoor on January 30 in support of turmeric farmers. Even a joint action committee (JAC) consisting of Congress, Telugu Desam and Communist parties has been formed demanding that a Turmeric Board is finally established in Nizamabad and Rs. 10,000 per quintal is declared as the minimum price for turmeric. Farmers are currently getting below Rs. 5,000 per quintal of turmeric.