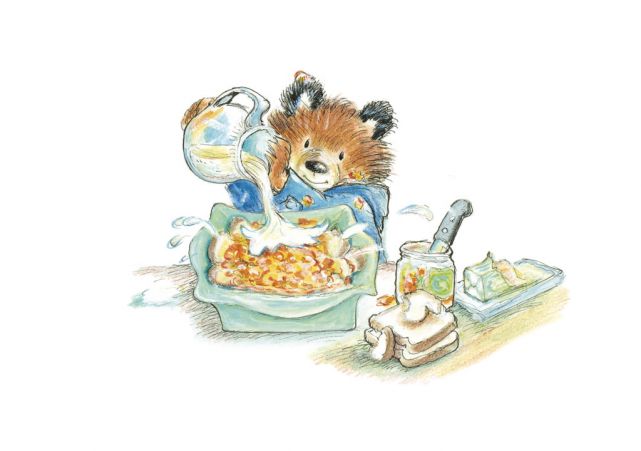 An illustration of Paddington Bear making bread and butter pudding

“Bread and butter pudding with marmalade is my favourite, and luckily the rest of the family like it too,” says Paddington.

“Jonathan calls it my marmalade sandwich pudding! But a word of warning, Mrs Bird says you can never improve on a dish which uses the best of ingredients, and this is a case in point. Don’t even consider using a loaf of ready-sliced bread.”

2. Spread three slices of the bread with butter, then marmalade, and top with the other three slices. Spread some butter on top of each sandwich and cut each one into four.

3. Lay the squares, buttered side up, slightly overlapping, in a buttered, ovenproof dish.

4. Whisk the eggs, milk, caster sugar and vanilla extract together and pour over the dish. Let it stand for about half an hour, to allow the mixture to soak in.

5. Sprinkle the demerara sugar over the surface.

6. Bake for about 45 minutes, until it is puffed up and the top is golden.

7. Serve with cream or ice cream.

Life in lockdown: How to have a home gym without breaking the bank