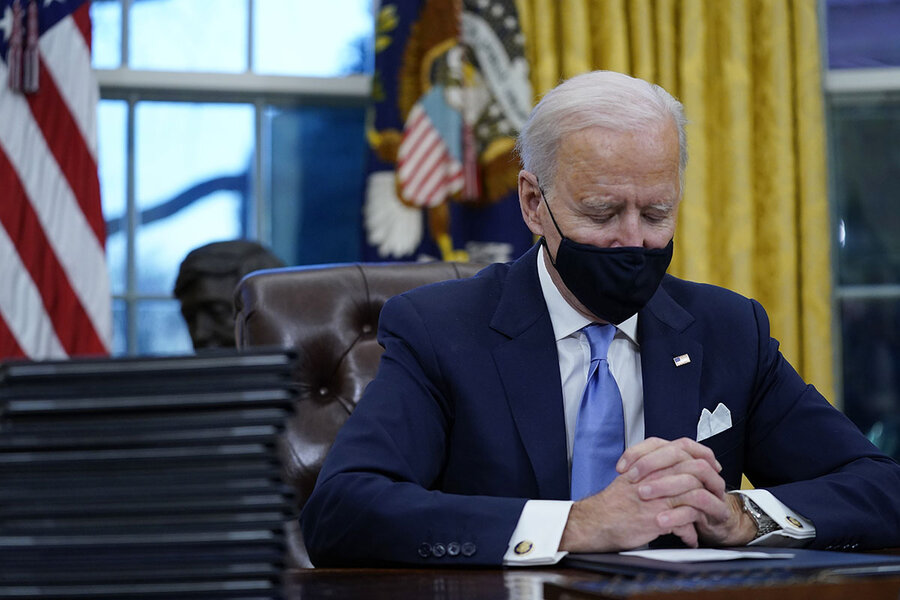 “We must end this uncivil war that pits red against blue, rural versus urban, conservative versus liberal,” President Joe Biden implored from the Capitol steps Wednesday in his inaugural address.

It was a sobering plea to a nation brought low by a raging pandemic, economic hardship, civil unrest, and long-building political dysfunction – punctuated just two weeks ago by a deadly incursion into that same building by fringe supporters of now-ex-President Donald Trump.

Republican officials widely disavowed the Capitol attack, rooted in efforts to reverse Electoral College results for the 2020 election. Yet polls show that up to three-quarters of Republican voters still don’t believe President Biden was legitimately elected. Some political observers are even asking: Has the United States become ungovernable?

President Biden, 50 years into his political career, is making the calculation of a lifetime that he can prove the naysayers wrong. And he’s asking Americans to do their part. “We can do this,” he said Wednesday, “if we open our souls instead of hardening our hearts, if we show a little tolerance and humility.”

Biden allies argue that, in winning the election, the president won a mandate to take action and deliver results.

“He believes with every fiber of his being that all Americans – Democrats, independents, Republicans – are looking for leaders who will work together, find common ground, and get the virus under control and get people back to work,” says Jack Markell, former governor of Delaware and a member of the president’s transition team on health care.

Mr. Biden’s focus Thursday, his first full day in office, was the pandemic. He signed 10 executive orders aimed at expanding access to testing and vaccines, reopening schools, and getting people back to work. Masks will now be required on interstate planes, trains, and buses, and international travelers will have to quarantine upon arriving in the U.S.

But executive action is one thing, used increasingly by presidents of both parties as a way to move fast. Working with an almost evenly divided Congress, necessary to fund the president’s ambitious plans, is another. Mr. Biden is hoping for quick approval of his $1.9 trillion COVID-19 relief package, which would supplement stimulus checks to American workers, fund vaccine production, and help state and local governments avoid laying off essential workers. Analysts see the plan as an effort to go big, knowing that some elements may get pared back.

Party rifts, and some optimism

Partisan battle lines are already taking shape, for example, around the proposed increase of the federal minimum wage to $15 an hour. Republicans say now is not the time to add new burdens to struggling businesses.

But viewed more broadly, and perhaps against the odds, the start of the new administration remains a time of hope and opportunity, a new poll shows. In many ways, the differences between former President Trump and Mr. Biden could not be more stark. Mr. Trump won the presidency without ever having served in public office, while Mr. Biden has made public service his life’s work, including 36 years in the Senate and eight years as vice president. Time and again, he has shown a willingness to work across the aisle.

Perhaps because of Mr. Biden’s history of working with Republicans, a majority of Americans are at least somewhat optimistic that he can restore civility and unity in the nation’s politics, according to a bipartisan Battleground Poll released last week by the Georgetown University Institute of Politics and Public Service.

Some 92% of Americans want Mr. Biden and Congress to work together. And 63%, including 44% of Republicans, think they will be successful.

In a Jan. 8 podcast, former GOP House Speaker Newt Gingrich argues that Democratic promises of bipartisanship are “baloney.” In their eyes, he says, all it means is that “conservatives surrender.” He points to the House plan to impeach Mr. Trump, which it did on Jan. 13, as evidence. What the former speaker didn’t know was that 10 Republicans would join all House Democrats in voting to impeach.

Mr. Gingrich also doesn’t mention that, in fact, he and former Democratic President Bill Clinton worked effectively across the aisle in the 1990s to achieve welfare reform and a balanced budget.

What’s more, says Ed Goeas, the Republican pollster on the Battleground Poll, “more than 90% of Americans want the president and Congress to solve problems relevant to their daily lives. But there’s a Catch-22: Republicans don’t trust Democrats to take a deep breath and move there, and vice versa. Independents don’t trust anyone.”

Celinda Lake, the Democrat on the Battleground Poll, argues that neither side has to compromise its principles to make achievements.

“You start out assuming that there’s common ground and you look for it,” Ms. Lake says, pointing to the book she wrote in 2010 with former Trump adviser Kellyanne Conway. “Eighty percent of voters agree on 80% of things.”

She dismisses Mr. Gingrich’s take as “old thinking” and “certainly not the approach the Biden-Harris team will take.”

What’s indisputable is that the impending impeachment trial of Mr. Trump will complicate Mr. Biden’s efforts to effect his agenda at a time of multiple national crises. The president’s spokespeople insist they can “walk and chew gum at the same time”; Democrats say the effort to convict Mr. Trump for “incitement of insurrection” over his rallying cries ahead of the Jan. 6 assault on the Capitol is necessary. A conviction, though seen as unlikely, would lead to a vote to prevent the former president from running again.

“Joe Biden is in a unique position, but that’s why he was chosen for this moment – because of his long-standing relationships with Republicans, and because of his compassion,” says Christina Greer, a political scientist at Fordham University.

She echoes concerns of some progressives that Mr. Biden will compromise with Republicans too much. “But he’s the closest thing we have to someone who is ready to work on Day One,” Professor Greer says, noting his experience as President Barack Obama’s vice president. When they took office in 2009, the nation was in the midst of a financial crisis. Mr. Biden oversaw implementation of the 2009 Recovery Act.

“Biden is not a fool; he understands that this won’t be easy,” says David Redlawsk, a political scientist at the University of Delaware. “He also knows that he doesn’t need to reach out to everybody. He can reach out to the 65% or 70% of Americans who would be on his side on many of his policies.”

The power of sunshine

Don Ritchie, the former Senate historian, sees parallels with former President Ronald Reagan, who early in his career led the Screen Actors Guild in labor negotiations, and knew to declare total victory even if he only got half of what he wanted. Former President Jimmy Carter, on the other hand, thought that if he didn’t get 100% of what he asked for, he had failed, recalls Mr. Ritchie.

Likewise, Mr. Biden shares Mr. Reagan’s sunny disposition, he says. The former president told of a loved book from childhood, “The Contest Between the Sun and the Wind,” a test of strength to see which can get a man to remove his coat. The wind tries to blow it off the man, but he only clutches it tighter. The sun warms the man until he takes it off.

“Reagan got a lot done by being warm and sunny, and after the years of Richard Nixon and Jimmy Carter, both parties were happy to have a more genial president,” says Mr. Ritchie. He suspects the same will be true this time around.