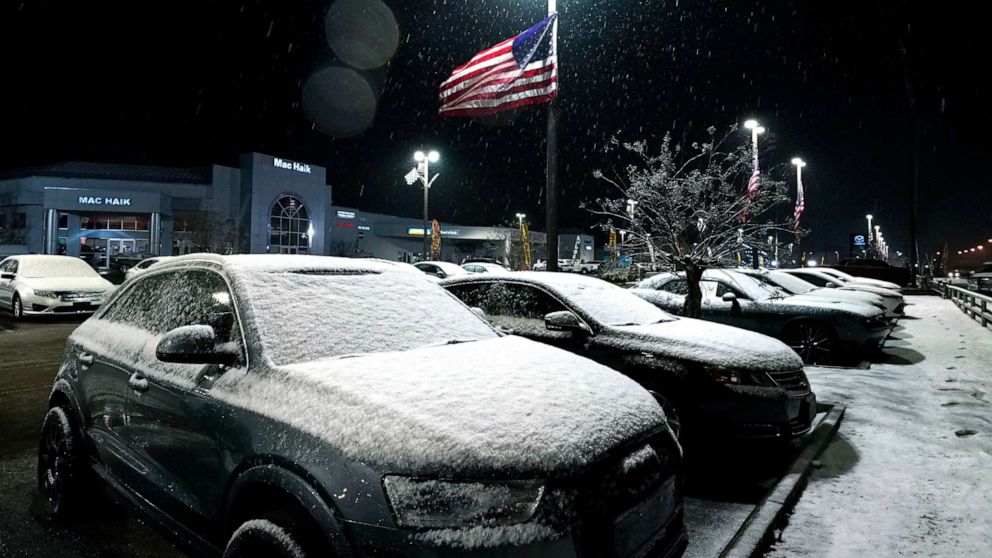 A blast of Arctic air is currently impacting the Northeast.

Wind chills are into the teens as of Saturday morning, from Washington, D.C., to Boston. It is feeling like single digits, and below zero across the interior Northeast.

On Sunday morning it will feel even colder across the region. This cold blast is notable because much of the Northeast hasn’t had too many periods of true winter air so far this season. But it is now feeling more like January.

It’s worth noting that this part of the country climatologically bottoms out in average temperature right around this date for the calendar year.

The weather pattern is in the process of taking quite a turbulent turn, as multiple complex storm systems are expected to move across the country over the next week.

A storm system is organizing itself Saturday morning in the West and brining rain to the California valleys and some mountain snow from Nevada to Colorado. This snow could cause some travel delays in the mountain passes, especially in parts of Arizona.

Later on Saturday, a part of this system will help a quick hit of snow develop and move through the upper Midwest. This snow is expected to last into Sunday. On Sunday morning, cities like Chicago and Green Bay could see snow. Local travel delays are possible.

As this system emerges from the Rockies it will become more organized and bring several hazards Sunday through Wednesday from the Central U.S. to the eastern U.S.

Heavy snow and a wintry mix will be possible Sunday night to Monday morning from Kansas to Indiana. Additionally, Severe storms are likely to develop across parts of northern Texas and Oklahoma late Sunday and early Monday. These severe storms could bring hail and brief tornadoes.

On Monday night, snow and a wintry mix will move into parts of Illinois stretching into parts of the mid-Atlantic. Mixed precipitation could down trees and power lines in several spots. Travel delays will be possible near the major cities Monday night into early Tuesday, especially in and around Chicago.

On Tuesday, snow will likely fall in the Appalachian Mountains, especially in parts of Pennsylvania and New York. At this time, the heaviest snow is likely to fall west of the I-95 corridor, but the forecast is worth watching as some potential wintry impact is possible in the Philadelphia and New York metro areas.

As a result of this first storm, up to a foot of snow will likely fall in the western Mountains. Additionally, the burst of snow in the Midwest could bring 3 to 6 inches of snow across the upper Midwest in Iowa, Minnesota and Wisconsin.

As the second part of this storm moves through the Central U.S. and eastern U.S. from Monday to Wednesday, there could be a large swath of over 6 inches of snow from Kansas to Michigan. Chicago may see very heavy snow.

In the Northeast, the heaviest snow will likely stay west of the major cities, but 3 to 6 inches could fall across parts of western Maryland, Pennsylvania and the Southern Tier of New York.

While all this is playing out, another storm will quickly move into the West on Sunday and bring heavy rain and mountain snow to parts of California. This storm is looking a touch stronger and will travel across the country.

A third storm will arrive in the West by midweek — and it’s looking even stronger than the others. It could bring heavy rain and snow to California.