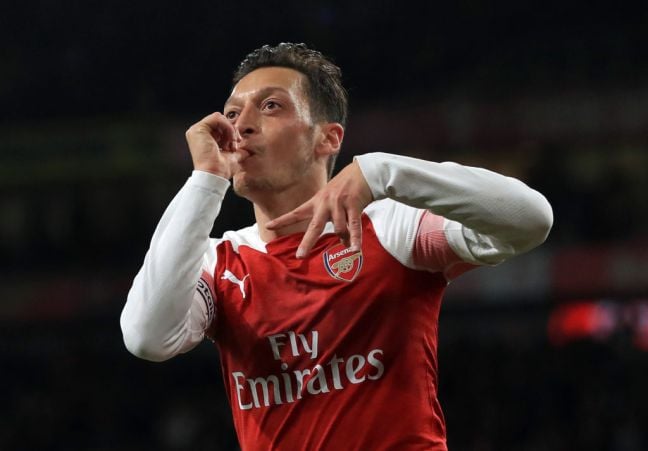 Mesut Ozil has left Arsenal to join Turkish Super Lig side Fenerbahce in a permanent deal.

Here, the PA news agency takes a look at some of Ozil’s most memorable moments during his time at the Emirates Stadium.

It's official… @MesutOzil1088 is an #Arsenal player. Read the full story, with quotes from Ozil: http://t.co/sFtrKrcOaG #OzilIsAGunner

Ozil’s arrival at Arsenal on September 2, 2013 was seen as a watershed moment by those in power at the club. Senior figures, including manager Arsene Wenger and chief executive Ivan Gazidis, had been keen to land a big-name player after the financial shackles of moving to the Emirates Stadium had been released.

Gazidis had earlier said Arsenal had “financial firepower” to compete with the best and were linked with the likes of Wayne Rooney and Gonzalo Higuain and had seen a bid for Luis Suarez rejected by Liverpool.

So bringing in Ozil, one of the top talents in Europe at the time, was heralded as a sea-change in terms of Arsenal’s ability to attract the best.

How can I assist you?

Ozil was named Arsenal’s player of the season for the 2015/16 campaign as Wenger’s side finished second in the Premier League – behind shock champions Leicester.

The playmaker laid on 19 assists in the league, with only Thierry Henry (2002/03) and Kevin De Bruyne (2019/20) bettering that figure in the history of the Premier League.

Fine displays in wins over Manchester United, Bayern Munich and Manchester City helped him clinch the club’s award by some distance.

The Champions League minnows of Ludogorets must have already been sick of the sight of Ozil long before he scored a memorable goal against the Bulgarians in November 2016.

Ozil had already scored his first Arsenal hat-trick in the clash in north London, a game which the hosts won 6-0. But in Sofia the Gunners were stunned to find themselves two behind early on, only to level through Granit Xhaka and Olivier Giroud.

Then Ozil provided a moment of magic in the closing stages, running onto a fine Mohamed Elneny pass before chipping the goalkeeper, sending two defenders to the ground and slotting home the winning goal – to this day he names the strike as the best of his career.

Ozil’s technical ability has always been lauded and nothing proves his ball skills more than the invention of his own type of finish.

The ‘chopshot’ was something he first trialled at Real Madrid but it did work its way into his game at Arsenal. Instead of looking to chip an onrushing goalkeeper, Ozil would kick down on the top of the ball, creating the elevation to loft it over the unsuspecting stopper.

He most famously pulled it off in a thrilling 3-3 draw with Liverpool in 2017 and sent the internet crazy with memes and GIFs of the goal.

✅ Start the move
✅ Finish the move
✅ Bring the Emirates to its feet#WeveGotOzil 〽️ pic.twitter.com/I0f1SRyK7X

By the time Leicester travelled to the Emirates Stadium on October 22, 2018 Ozil’s career had hit a roadblock. A number of poor or peripheral performances had seen the Arsenal fanbase split over whether Ozil still warranted a place in a side now overseen by head coach Unai Emery.

But there were still flickers of the Ozil of old as he showed in taking apart the Foxes in a 3-1 win, scoring the equaliser with a first-time finish, laying on the second and playing a big part in a stunning team goal to add the third.

It was arguably the last man of the match performance of Ozil’s Arsenal career and it all came with him wearing the captain’s armband.