Greetings radio amateurs- homemade products !
For a long time before the appearance of electronics in the form we are accustomed to, people used an hourglass and various other similar devices for reporting time intervals. Now, in the 21st century, high-precision time meters exist and are actively used, which allow making measurements or counting intervals with an accuracy of up to nanoseconds and higher. They can be used, for example, in science for carrying out various studies that require high accuracy. For domestic use, such accuracy is not needed – but often simpler timers are needed, which count down the interval from 1 second to several minutes, for example, for high-quality teeth cleaning or other operations. And this is where electronics comes to the rescue- to build the simplest timer with an adjustable time range can be literally a pair of transistors. It is not necessary to use it exactly for its intended purpose – it can be an excellent “cube”, for example, in various automated systems for performing any operations. Or, for example, it can be built into a UV lamp to expose a photoresist, so the lamp will shine for a strictly defined time and it will not be possible to ruin the board by overexposure. 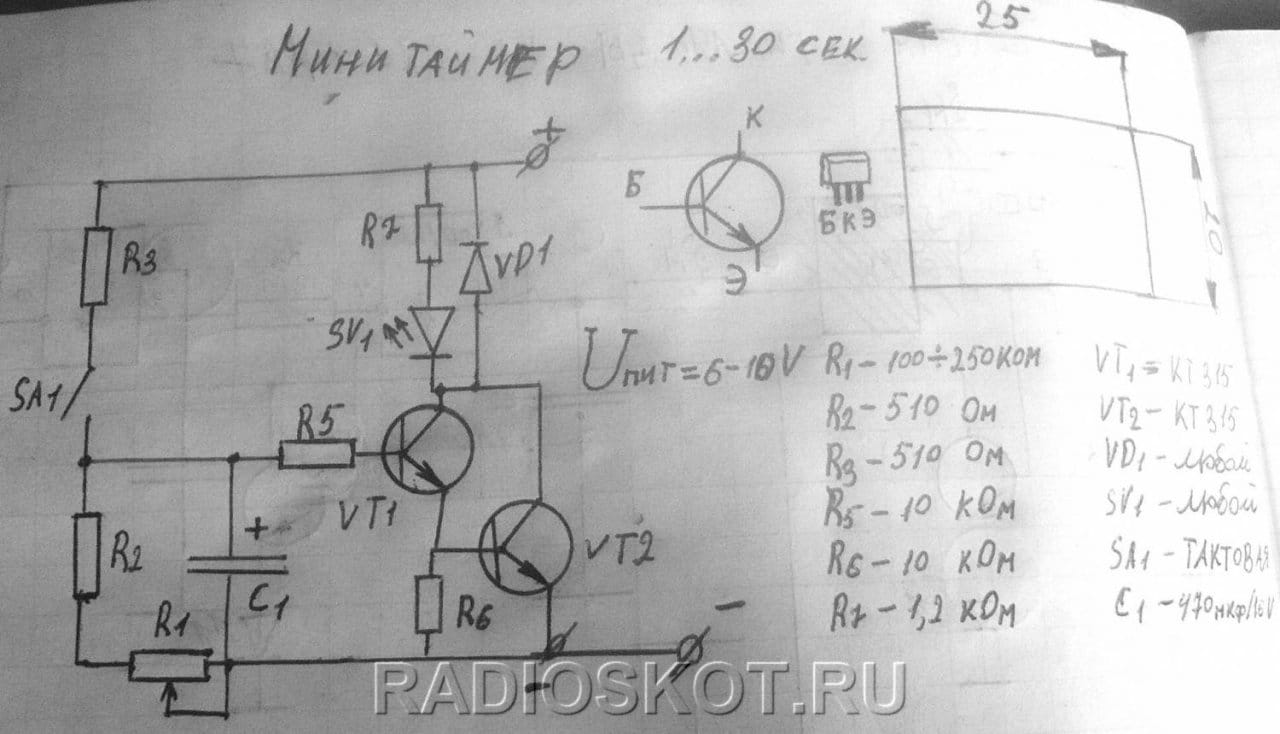 The scheme is simple and laconic – its principle of operation is very clear. The first transistor works as a timing chain, or rather, there is a timing chain in its base circuit, and the second as a key that turns the load on and off. This happens as follows – the supply voltage is applied to the circuit, the SA1 switch is open, both transistors are closed, the load is de-energized. If you short-circuit SA1, the capacitor C1 will be charged, thereby accumulating charge on its plates, which will keep the first transistor open for some time, the timer is activated. A variable resistance resistor is installed in parallel with the capacitor, through which the capacitor will slowly discharge. As soon as it is discharged, the transistor will close and the load will turn off, thus the time interval will expire. If you press the button while the timer is active, then its time will simply be reset and it will start “counting” again. The LED on the diagram in the collector circuit of the first transistor indicates the state of the load – the LED is on, which means the timer is counting down the time and the load at this moment receives voltage. Almost any potentiometer from 10 to 500 kOhm can be used as a variable resistor (R1), the value of this resistor will determine the maximum time that can be set to the timer. The maximum time will also depend on the capacitance C1 – the larger it is, the longer the discharge will take, the best option would be 470 μF. The values ​​of the rest of the resistors can be varied within a fairly wide range, the scheme is “oak” and will work in any case. The load is connected in parallel to the VD1 diode, you can put 1N4148 or 1N4007 as the diode itself. The load can be anything – for example, a relay for switching electrical appliances, or an LED light bulb, or, for example, a buzzer, presented in the diagram below. Please note that if the current consumption is more than 50 mA, then the second transistor should be taken more powerful, for example, BD139. In the simplest case, the circuit will work with any low-power NPN transistors, for example, KT315, BC547, KT3102. One of the variants of the tweeter circuit is shown below, it can be assembled according to various circuits using just a couple of transistors. 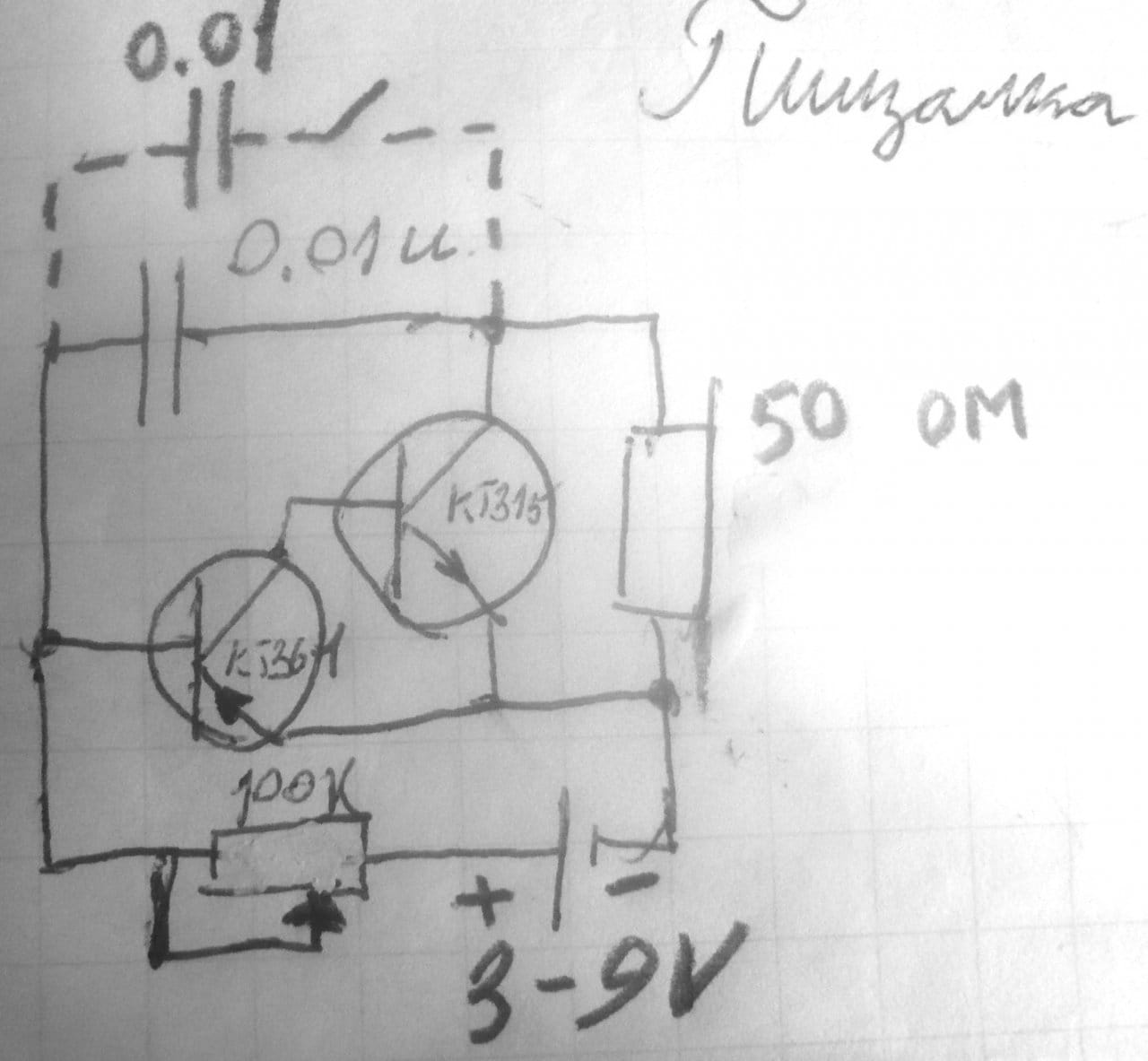 The supply voltage of the circuit is 5-12V, the current consumption of the circuit itself is practically absent, the main current will go through the connected load. You can use literally anything as a power source – a krona battery, various network adapters, as well as any devices with a USB output. A circuit is made on a small printed circuit board, or it can even be assembled by surface mounting. Since the dimensions are very small, the tracks can be easily drawn with a marker, as the author did. Please note that common permanent markers are not the best for this case, they are washed off when they are in the etching solution. The ideal option would be female nail polish or varnish markers, which create a thick and durable layer on the surface. The pickling solution can be made, for example, from hydrogen peroxide and citric acid, or the more traditional version is based on ferric chloride. The first option is preferable in terms of purity and soiling, since ferric chloride stains are difficult to wash off, and they are approximately equal in etching speed. 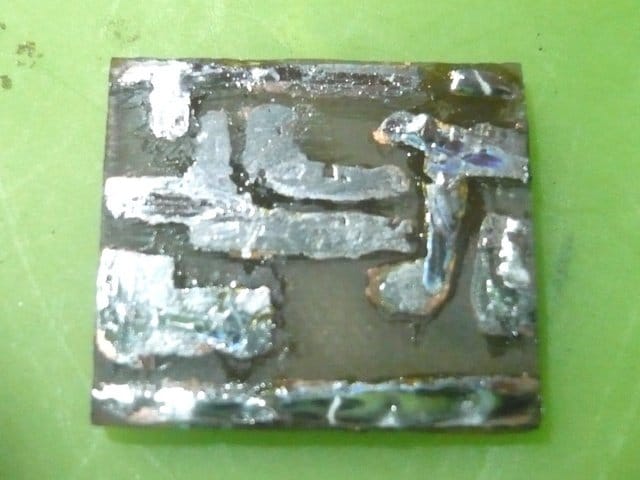 After etching the track it will not hurt to tin it, this will make the soldering process a little easier. To solder the lead-out parts, it is not necessary to drill holes, you can solder all the parts directly from the side of the tracks, as the author did. This option is a little less aesthetic, but no less reliable, subject to high-quality soldering. Before starting soldering, it is worth laying out all the parts used in order and checking whether their ratings correspond to the required ones. 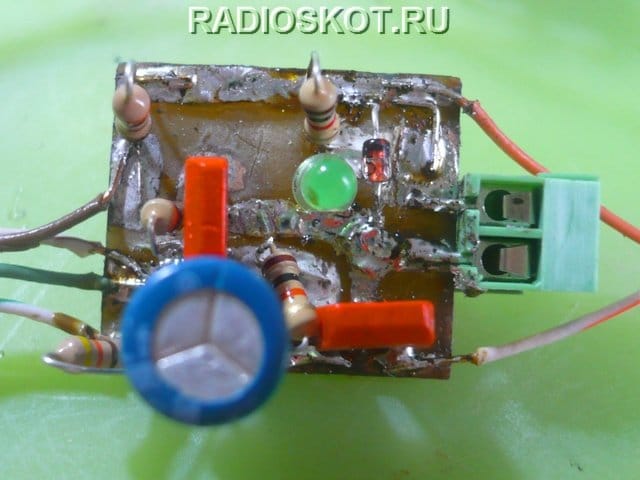 The variable resistor is removed from the board on wires. Please note that most potentiometers have three contacts – to connect to the circuit, one of the extreme contacts of the potentiometer (any) must be closed with the middle one. Thus, you get two contacts, which will already go to the circuit. The photo below shows a schematic of a buzzer assembled by the author with a connected telephone capsule for sound reproduction. 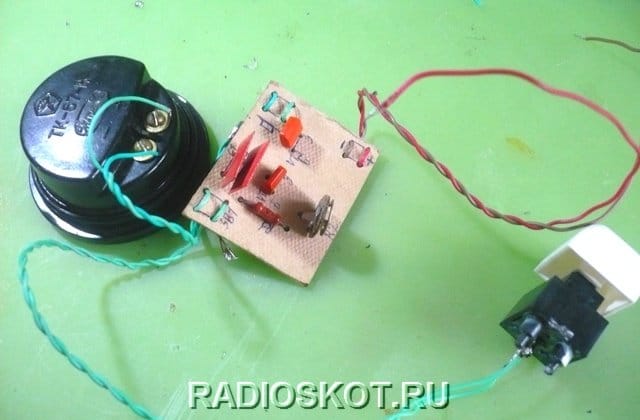 Thus, we have an interesting electronic device that can be assembled just for fun and electronics skills and used as a toy. Or you can use it for its intended purpose, because the modern world is constantly striving for automation in almost all areas and such devices will always be relevant, even if they are assembled only on a couple of transistors. After assembling and testing the timer, you can install it in the case, bring the potentiometer shaft to the front panel, put on the knob and draw a graduated scale, so the timer can be set not “by eye”, but, for example, in minutes or seconds. Happy build!