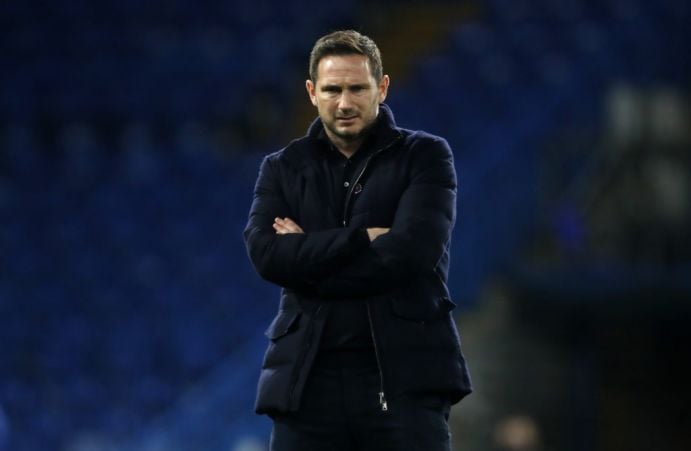 Frank Lampard expressed his disappointment after being sacked by Chelsea, © PA Wire/PA Images

Frank Lampard admitted his disappointment at not being given more time by Chelsea after the club sacked their record goalscorer as manager on Monday.

Club owner Roman Abramovic insisted the former midfielder’s status at the club was undiminished by the decision, which came after a run of five defeats in eight Premier League games.

With Chelsea ninth in the table and 11 points off leaders Manchester United after spending £220million in the summer, Abramovich brought Lampard’s time as manager to an end midway through a three-year deal, and the PA news agency understands Thomas Tuchel is set to replace the 42-year-old.

The LMA has released a statement on behalf of Frank Lampard

Lampard issued a statement via the League Managers Association in which he described managing the club as a “huge privilege and an honour”, thanking the clubs’ fans who have largely remained staunchly behind him.

But Lampard added: “When I took on this role I understood the challenges that lay ahead in a difficult time for the football club.

“I am disappointed not to have had the time this season to take the club forward and bring it to the next level.”

During his playing career at Chelsea, Lampard won three league titles and the Champions League in 2012, which perhaps explains why Abramovich made the surprise move to comment on his latest sacking.

“This was a very difficult decision for the club, not least because I have an excellent personal relationship with Frank and I have the utmost respect for him,” the Russian said.

“He is a man of great integrity and has the highest of work ethics. However, under current circumstances we believe it is best to change managers.

“On behalf of everyone at the club, the board and personally, I would like to thank Frank for his work as head coach and wish him every success in the future.

“He is an important icon of this great club and his status here remains undiminished. He will always be warmly welcomed back at Stamford Bridge.”

A club statement added: “There can never be a good time to part ways with a club legend such as Frank, but after lengthy deliberation and consideration it was decided a change is needed now to give the club time to improve performances and results this season.”

Chelsea will make “no further comment” until a new head coach is appointed and they will have to act fast with Wolves set to visit on Wednesday.

Tuchel, who is waiting in the wings, only became available a month ago when he left Paris St Germain less than five months after taking them to the Champions League final, which they lost to Bayern Munich.

The 47-year-old won back-to-back league titles with PSG, but that was not enough to satisfy the club’s ambitious owners who replaced him with Mauricio Pochettino.

Prior to his spell in France, Tuchel impressed in his native Germany with Borussia Dortmund following a spell with Mainz.

Tuchel will be familiar with at least two members of the Chelsea squad after he worked with Thiago Silva at PSG and handed Christian Pulisic a chance at Dortmund while the American was still a teenager.

Brazilian defender Silva commented on Lampard’s departure on social media. He wrote on Instagram: “I would like to thank you for everything you and your committee have done for me since the day I arrived.

“As I told you, it seemed like we had been working together for 10 years!! Thank you very much for everything legend.”

Lampard guided the Blues into the fifth round of the FA Cup on Sunday with a 3-1 win over Luton, but has paid the price for a drastic drop in league form which has seen the club plummet since topping the table in December.

A win percentage of 52.4 per cent after 84 games was not enough to prevent the ex-England international becoming the 10th manager to be sacked by owner Abramovich.

Harry Redknapp felt his nephew Lampard deserved more time, and told talkSPORT: “They’ve been on a bad little run, but so has everybody.

“Jurgen Klopp’s going through a bad spell. Does that suddenly make him a bad manager? He will come out of it again as we all know, but you need time. You will have your ups and downs.

“Alex Ferguson survived by the skin of his teeth when the board looked like they would sack him after 18 months or two years at Old Trafford where he hadn’t won anything.

“Suddenly he goes on to arguably be the greatest manager we’ve ever seen. You need time and unfortunately at Chelsea it seems a club where they don’t seem to give time.”

When given the job after only one season at Derby, experience was always against Lampard but he was able to negotiate a transfer ban, introduce several young players and lead the team to a fourth-placed finish as well as an FA Cup final in his first campaign.

Defeat to Arsenal at Wembley in August was followed by a 7-1 aggregate thrashing to eventual Champions League winners Bayern and it convinced the Blues board cash needed to be splashed.

Ben Chilwell and Kai Havertz arrived for big fees following the earlier signings of Hakim Ziyech and Timo Werner, but arguably only Ziyech has justified his price tag so far.

“I am always sad when a colleague loses his job and Frank is not just a colleague he is an important person in my career so I feel sorry he did,” Mourinho said.

“But it is the brutality of football, especially modern football, so when you become a manager you know that sooner or later it is going to happen to you.”