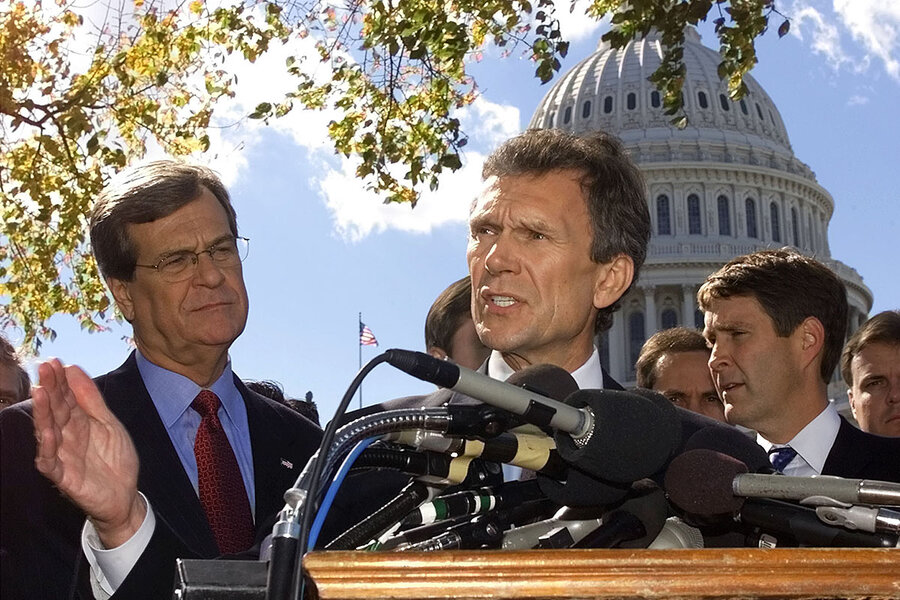 Senators Lott and Daschle speak with one voice when it comes to working out an agreement, as well as handling an article of impeachment against former President Donald Trump that will be delivered to the Senate on Monday: Act with urgency. There’s no time to lose in solving the country’s problems.

An edited and condensed transcript of their remarks follows:

Q: What will a 50-50 Senate mean for the president, his agenda, and his ability to govern?

Daschle: It’s primarily an opportunity to move his agenda. The majority leader, Chuck Schumer, has a lot of authority deciding what that legislative schedule is going to look like. Obviously, also it will mean that people in his party have the chairmanships in the committees.

That said, I think it’s important to emphasize that in a 50-50 Senate, you really have to have bipartisanship to be able to move that agenda. It’s one thing to schedule something, it’s another to get it done. And I don’t think you’ll get it done unless you can see some real effort put into meaningful bipartisanship.

Q: What lessons does the power-sharing agreement you worked out hold for Senate leaders today?

Lott: One of the advantages that we had is that Tom and I had already been through some difficult things. We had a good relationship. I respected him. I trusted him. We did get a lot accomplished in the five months after we reached that agreement.

The components were pretty simple, although they weren’t easy to agree on because we had to sell whatever we agreed on through our conferences. Tom’s folks didn’t want to make a deal, and my people felt like they’d done too much.

I’ve been saying to people that everybody needs to calm down, and they should get the rules worked out. Our rules were accepted by voice vote. They’ve got work they need to do. They need to do confirmations, they’re going to do another COVID package. Hopefully they’ll do an infrastructure bill. There are some things that can have broad bipartisan support even in, especially in, a 50-50 Senate.

Q: What was the most challenging thing about that agreement and how did you overcome it?

Daschle: I really look back with enormous admiration for Senator Lott. It took a lot of courage to come to the caucus and say, “Look, guys, we’ve got to give up some things here. We may be in the majority, but we’re in a 50-50 Senate.” And he got enormous pushback, but he showed just remarkable courage and stamina. It will be now up to Chuck Schumer to show that same degree of courage and willingness.

Lott: When I took it to the Republican conference to outline the details, I did get strong pushback from some of my closest friends. Their argument was, “Look, we have the 51st vote, we’re the majority. Why should we be giving up so much, even if it might make things work a little better?” But cooler heads prevailed and they realized this was something that was good. When I looked at the history, the last time they had a tied Senate, it took them five months to work it out. It was not a pretty scene. I felt like we needed to get an agreement so we could go to work. In a way, I had a premonition that we might not have a majority very long – and of course, Jim Jeffords switched parties.

Q: You mentioned the comity in your relationship. You’re friends. But there’s no love lost between Chuck Schumer and Mitch McConnell. How do you improve that? The president is a creature of the Senate – can he help here?

Daschle: Trent and I had a red phone on our desks that were only connected to each other. We had every confidence that when that phone rang, it was going to be the other leader. The red phone was really a metaphor for our determination to communicate. Regardless of how close a friendship Mitch and Chuck have, they have to communicate.

Trent and I both have strongly recommended to other presidents, and I’ve made the recommendation to President Biden’s staff, that he call the leadership down to the White House at least once a week, say, Tuesday mornings, to talk about the things they could do for that particular week.

Lott: Even though Tom and I didn’t always agree philosophically, we had sort of common backgrounds. We both came from states with a lot of rural areas, agriculture and blue-collar backgrounds. Chuck and Mitch are very different. Chuck is New York City. Mitch was born in Alabama and represents Kentucky.

But you touched on a point that could be critical. President Biden is a creature of the Senate. He knows the place, he loves the place. I think he has the ability to nudge Chuck along and reach out to Mitch.

Q: We have a divided nation, but also divided parties. Republicans just lost two Senate seats in Georgia and a presidential election. How can the GOP pick up the pieces and move forward again?

Lott: It will be a challenge. You still have some people that look to Trump to see what he’s going to have to say or do. You’ve got some more moderate type of senators that have been speaking out, like Mitt Romney and Susan Collins to a degree. But, you know, we don’t know exactly how this is going to play out.

Who could have thought we’d lose both those Senate races in Georgia? But that’s what gave Democrats the 50-50 Senate. Now we’re going to have to figure out how we can move forward with a unified party.

Q: Senator Daschle, same question for you on the challenges within the Democrats. The president wants unity and bipartisanship, but some Democrats want to get rid of longstanding rules, cut Republicans out, and push their agenda through.

Daschle: I think the real question that every Democrat – and for that matter, every Republican – has to ask is, do we want to make a statement, or do we want to really make good law? You don’t make good law by making statements and then jumping up and down because you didn’t get your way. You’ve really got to work hard on a step-by-step, day-by-day basis to grind it out, find compromise. Trent has heard me say this far too many times, but compromise is not capitulation. Compromise is the oxygen of democracy. And we’ve got a need for a lot more oxygen going forward. Everybody needs to understand that, or we’re going to continue to face the enormous level of dysfunction that we’ve witnessed over the last few years.

Q: Do you think the Jan. 6 attack on the Capitol can be kind a wake-up moment for addressing these problems?

Lott: I hope it’s a wake-up point. It was one of the most depressing days that I have experienced in a long time. I just couldn’t believe that they were going into that building that I worked in and around for 39 years. I view it as a sacred place, a symbol of freedom and democracy. I was frankly outraged.

Republicans better think about how we’re going to talk to the people that were there and make sure that that sort of thing does not happen again. We got a lot of mending to do and it always begins at the top. But I do think Tom, and he makes the point and he’s absolutely right, we need better communication between and among ourselves, and not always talking at each other through the media.

Q: What repercussions, if any, do you think GOP senators who voted to object to the Electoral College results should face?

Lott: I’ve found over the years that retribution is not a positive thing. Yesterday, we turned the page. We had an inauguration with a president that had a good message of unity. The best thing we can do is to start looking forward, take it one step at a time, deal with the issues at hand.

Q: An impeachment trial of former President Trump is looming in the Senate. Will that get in the way of Biden’s start to his administration?

Daschle: I’m encouraged by the conversations I’ve had in the last 24 hours that they’re considering the possibility of a three-day trial, which I think would really be in everyone’s interest. We know what the facts are. We don’t need a lot of give and take. It seems to me that the question is fairly clear-cut.

Lott: I wish there was a way that we didn’t have to go through that. But the Constitution is pretty clear. If the speaker sends it over, the Senate has got to move forward. I’m hoping that they can reach an agreement and deal with it quickly as possible and as responsibly as possible so that we can move on.

Q: Do you think Senator McConnell might vote to convict?

Lott: He’s been pretty tough in what he had to say. Frankly, I doubt it, but he’s obviously not happy with the way the president handled things, certainly in the last few days.

Q: The president has a lot on his plate, from immigration to climate change to this big, $1.9 trillion pandemic relief bill. Where do you see potential for common ground?

Daschle: I would say all the above, if it’s done right. I think there’s potential on infrastructure in particular. We recognize we still have many challenges in addressing COVID and the economy. The potential is there. It just really is going to be determined in part by the degree of cooperation and the degree of intensity around the effort that is made to get these issues addressed.

Q: What are your concluding thoughts about the new Congress and president looking ahead?

Lott: I thought the inauguration was positive. Hopefully, the tone has changed. I read the newspapers this morning and they seem happier today, as I thought they probably would. I just hope for the best.

Daschle: I thought the most inspiring moment was Amanda Gorman’s poem “The Hill We Climb.” America has a hill to climb and it will take leadership. It will take cooperation. And it will take a lot of persistence, but we can climb that hill.