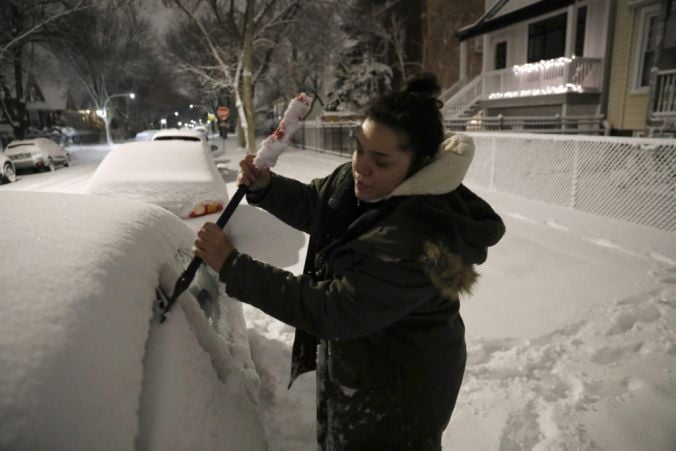 A major winter storm has dumped more than a foot of snow on parts of the middle of the country while another system blanketed parts of the south west with snow, disrupting travel for a second day and closing many schools.

There were closures of several coronavirus testing sites on Monday and Tuesday in Nebraska and Iowa, and both states saw 12 to 15 inches of snow in places. At least 4 inches of snow was expected through Tuesday across most of an area stretching from central Kansas north east to Chicago and southern Michigan.

National Weather Service meteorologist Taylor Nicolaisen, based near Omaha, Nebraska, said up to 15 inches was reported in spots between York, Nebraska, and Des Moines, Iowa. He said it is uncommon for the region to get more than a foot of snow from a single storm, and it has been decades since some cities saw this much snow.

Here's the Winter Storm Severity Index (WSSI) for the Continental U.S. this evening into midday Tuesday. Moderate to major winter impacts are likely in the Midwest including Chicago metro area. Impacts are also possible in portions of the Mid-Atlantic (around D.C.) and Southwest. pic.twitter.com/sVp6OhHq3Z

The storm made travel treacherous in places as wind-whipped snow piled up. Major roads were temporarily closed in western Nebraska and in Wisconsin near Milwaukee because of crashes, and scores of flights were cancelled at airports across the region.

In Wisconsin, the weather service predicted up to 10 inches of snow could fall in the Milwaukee area, with the highest totals along Lake Michigan.

In the Chicago area, 3 to 5 inches of snow had fallen by early Tuesday. Meteorologist Bett Borchardt forecast snowfall up to 8 inches or more in northern Illinois before the storm ends on Tuesday evening.

A storm impacting California today through late week will bring heavy snow to the northwest mountains at unusually low elevations with FEET of snow in the Sierra Nevadas, heavy rain with possible flooding especially near recent burn scars, and high winds.https://t.co/VyWINDk3xP pic.twitter.com/QcLraxfZaS

In the south west, more than a foot of snow fell in the mountains of southern California, Nevada and Arizona.

Icy conditions in mountains north of Los Angeles shut Interstate 5 in Tejon Pass and State Route 58 in Tehachapi Pass as one storm exits and a major new system headed towards California.