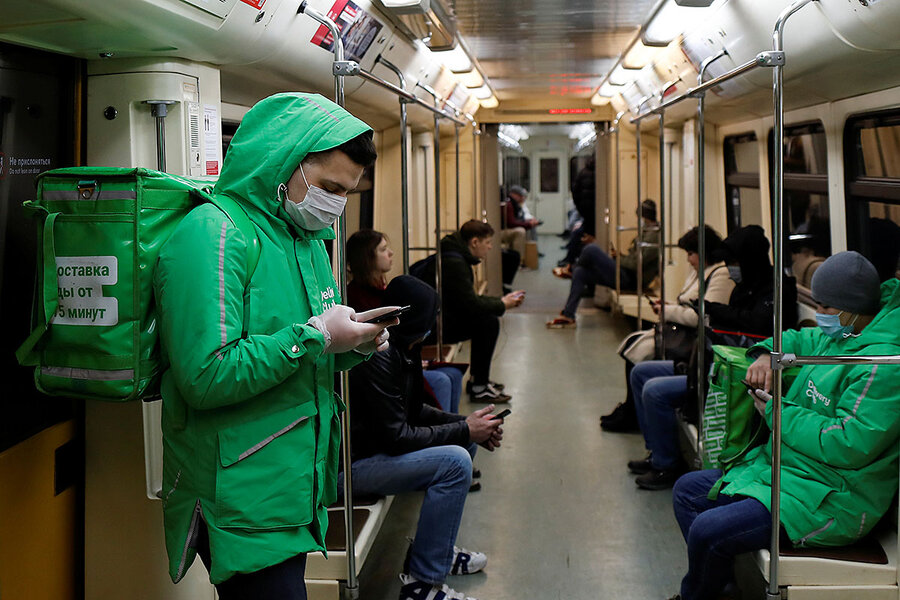 Mikhail rides his bicycle around Moscow for up to 12 hours a day with a large insulated pack on his back, even in the dead of winter, delivering food from restaurants to hungry consumers in their homes.

This is not your old-fashioned pizza delivery service. Mikhail is a front-line worker in one of the world’s fastest-growing industries.

The company he works for, the giant digital corporation Yandex, is often referred to as “Russia’s answer to Google.” Its main competitor, Delivery Club, is jointly owned by Russia’s largest state bank, Sberbank, and one of its biggest internet companies, Mail.Ru. On any given day, each company has an estimated 10,000 food delivery couriers schlepping around the city on bicycles, public transport, and sometimes their own cars.

Since the pandemic hit, with its attendant lockdowns, business has exploded. Formerly just a convenience, delivered food became a lifeline for struggling restaurants and customers isolated in their homes. There are no reliable figures, but some estimates say food deliveries have grown at least threefold. Thousands of young people laid off from jobs like store clerks, waiters, construction workers, and such, took up delivering food to make ends meet.

It has its advantages. “Nobody cares what your political opinions are, as long as you don’t bad-mouth the company. You can pretty much choose your own working hours, day or night. There’s a certain freedom that you feel,” says Mikhail. “There’s lots of work, as much as you want.”

From the moment he accepts an order, he is paid a fixed amount by time and distance to go to the designated restaurant, pick up the food, and deliver it to the customer. But if he is delayed for any reason he will be fined. If he switches off the GPS on his phone for more than half an hour, he will be docked a day’s wages. If he refuses to accept an order, he will be fined. Mikhail figures he works an average of 240 hours per month, for which he earns about $680.

What would he change, if he could?

The couriers are completely outside Russia’s official system of labor law. No official employment contract means no security, no benefits, and no means to redress grievances. It can be dangerous too: Last April a young courier in St. Petersburg died of a heart attack, allegedly brought on by exhaustion. So ironically in a country that spent 70 years under Communist Party rule, the couriers are having to reinvent combative trade unionism culture in Russia from the ground up to better their conditions.

“There are growing numbers of people who do this courier work permanently, for a living, and there are few other prospects for them in today’s economy,” says Kirill Ukraintsev, an activist journalist turned food-delivery union builder. “Russia’s inadequate labor legislation allows them to be classified as self-employed and thus frees the company from any responsibility for them. Although they are part of the fastest-growing and most profitable business, couriers are at the bottom of the labor pyramid. They are super-exploited. We want to change that.”

“Heroes of the pandemic”

The delivery phenomenon is not unique to Russia, of course. The same sorts of couriers can been seen in cities around the globe, especially since the beginning of the pandemic.

“This is a huge and rapidly expanding business. It’s a whole new world that’s being birthed by 21st-century technologies,” says Yevgeny Gontmakher, a social economist and former government adviser. “You see the traditional bank, Sberbank, teaming up with a digital company to create a whole ecosystem of new services, and reshaping the economic landscape as they go. The people driving this are mostly young, both the couriers and management of these new businesses, and they need to develop the people skills to keep it working. It’s not just in Russia; it’s a global phenomenon.”

And just like elsewhere in the world, the couriers have little in the way of work benefits or protection. That’s why, about six months ago, Mr. Ukraintsev decided he wanted to do more than just cover social conflicts and set out to build a union for the food delivery workers.

He’s since gathered about a hundred activists, including Mikhail, into an as-yet unrecognized Union of Couriers, and claims many more supporters. They have two key demands: the abolition of fines and the right of couriers to sign proper employment contracts like other workers. Mr. Ukraintsev is quite conversant in global developments, such as the passage of Proposition 22 in California, which secured some benefits for Uber and Lyft drivers – who are in an analogous position to food couriers – but denied them others.

They’ve had a few minor successes. The group staged a one-day wildcat strike in October, and even though the numbers of participating couriers was small, the action received a lot of positive coverage from a curious Moscow media. Managers of Delivery Club agreed to meet with the activists and promised to reduce some of the fines.

Earlier, several companies had funded the erection of the world’s first monument to food couriers, the “heroes of the pandemic,” in a Moscow commercial square.

An unsigned statement from Delivery Club, in response to questions from the Monitor, said that all outstanding complaints from couriers about payment delays and similar grievances have been dealt with, and “the service is now operating normally.”

Mr. Ukraintsev says he’s under no illusions that a bit of good press and nice corporate PR is going to change anything.

“This is going to be hard,” he says. “The new digital economy destroys all contacts between people. Each one works alone, and deals with the company mostly through his telephone, without any direct human contact. The workers are a shifting labor force, many of them migrant workers who lack even the protections of citizenship and fear being deported if they make waves. Our answer is to use the companies’ own digital methods, reaching out through social media, Telegram channels, and YouTube. But we’re also doing street protests and other more classical forms of outreach.”

“These food delivery workers need to be supported”

Boris Kagarlitsky, a veteran left-wing activist and professor at the Moscow School of Social and Economic Sciences, says that despite those early successes, the couriers are going to need solid political backing to achieve their main goal of being treated like regular workers.

“It’s easier to win some results in a growing industry. If they were fighting for a few scraps in a declining industry, their early efforts might have turned out quite differently,” he says. “But it’s pretty clear that public opinion was crucial to their early gains, and is going to be indispensable in their struggle going forward. These employers, whose services work at close quarters with the public every day, need to be concerned with positioning themselves in a positive PR light, so that’s a vulnerability.

“But more than that, these food delivery workers need to be supported by political forces that will press for laws to meet their needs. If we had a labor-friendly government in Russia, which we do not, it could impose regulations on the companies to register their workers as full employees. These couriers have some support from a few Moscow City Council members, mainly Communists, but no political party has yet taken their side.”

The official 30 million member Federation of Independent Trade Unions, which is aligned with the pro-Kremlin United Russia party, does not appear interested in helping. The much smaller, more recently created Confederation of Labor has extended legal assistance to the couriers, but does not seem in a position to do much more.

“We need to counter these new employer-centered ideas about ‘labor flexibility,’ and that can only happen through concerted political action, culminating in strong laws that permanently ground workers’ rights,” says Mr. Kagarlitsky. “We are very far from that right now, but this is just the beginning.”