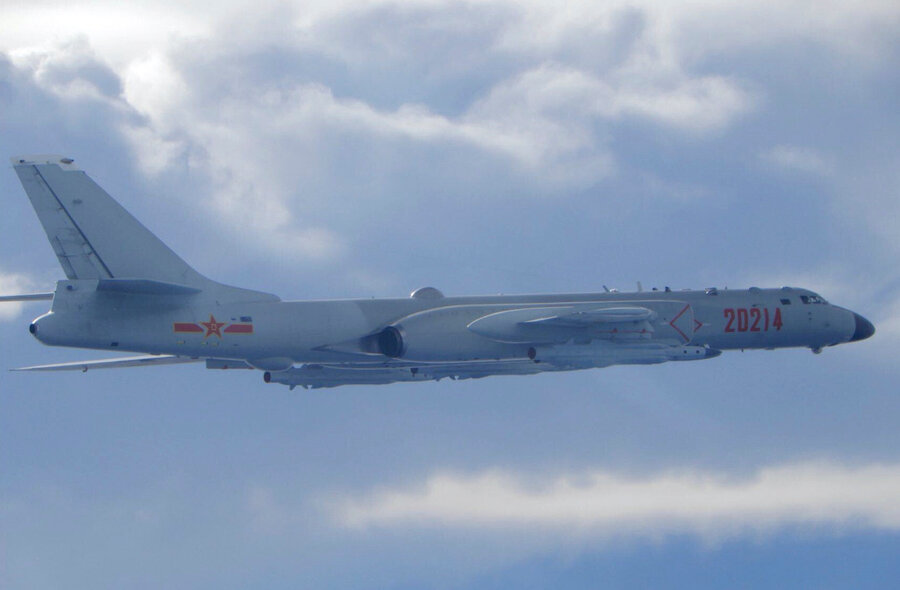 The United States has reaffirmed support for Taiwan following China’s dispatch of warplanes near the island in an apparent attempt to intimidate its democratic government and test American resolve.

The U.S. State Department on Saturday said it “notes with concern the pattern of ongoing [China’s] attempts to intimidate its neighbors, including Taiwan.”

“We urge Beijing to cease its military, diplomatic, and economic pressure against Taiwan and instead engage in meaningful dialogue with Taiwan’s democratically elected representatives,” spokesperson Ned Price said in the statement.

Washington will continue to deepen ties with Taiwan and ensure its defense from Chinese threats, while supporting a peaceful resolution of issues between the sides, the statement said.

There was no immediate Chinese response Sunday.

Taiwan’s Defense Ministry said China on Saturday sent eight bombers capable of carrying nuclear weapons and four fighter jets into airspace just southwest of the island, part of a long-standing pattern of Chinese incursions aimed at pressuring the government of President Tsai Ing-wen into caving to Beijing’s demand that she recognize Taiwan as a part of Chinese territory.

The latest Chinese overflight came on the heels of President Joe Biden’s inauguration, emphasizing the island’s enduring position in the panoply of divisive issues between the sides that also include human rights, trade disputes and, most recently, questions about China’s initial response to the coronavirus pandemic.

Mr. Biden’s administration has shown little sign of reducing pressure on China over such issues, although it is seen as favoring a return to more civil dialogue. In another sign of support for Taiwan, the island’s de-facto ambassador to Washington, Hsiao Bi-khim, was an invited guest at Mr. Biden’s inauguration.

And in a final swipe at China, the Trump administration’s outgoing U.N. ambassador tweeted that it’s time for the world to oppose China’s efforts to exclude and isolate Taiwan, drawing sharp criticism from Beijing.

Ambassador Kelly Craft accompanied the tweet with a photo of herself in the U.N. General Assembly Hall where the island is banned. She carried a handbag with a stuffed Taiwan bear sticking out of the top, a gift from Taiwan’s representative in New York, Ambassador James Lee.

Taiwan and China separated amid civil war in 1949 and China says it is determined to bring the island under its control by force if necessary. The U.S. switched diplomatic recognition from Taipei to Beijing in 1979, but is legally required to ensure Taiwan can defend itself and the self-governing democratic island enjoys strong bipartisan support in Washington.

Ms. Tsai has sought to bolster the island’s defenses with the purchase of billions of dollars in U.S. weapons, including upgraded F-16 fighter jets, armed drones, rocket systems, and Harpoon missiles capable of hitting both ships and land targets. She has also boosted support for Taiwan’s indigenous arms industry, including launching a program to build new submarines to counter China’s ever-growing naval capabilities.

China’s increased threats come as economic and political enticements bear little fruit, leading it to stage war games and dispatch fighter jets and reconnaissance planes on an almost daily basis toward the island of 24 million people, which lies 100 miles off China’s southeast coast across the Taiwan Strait.