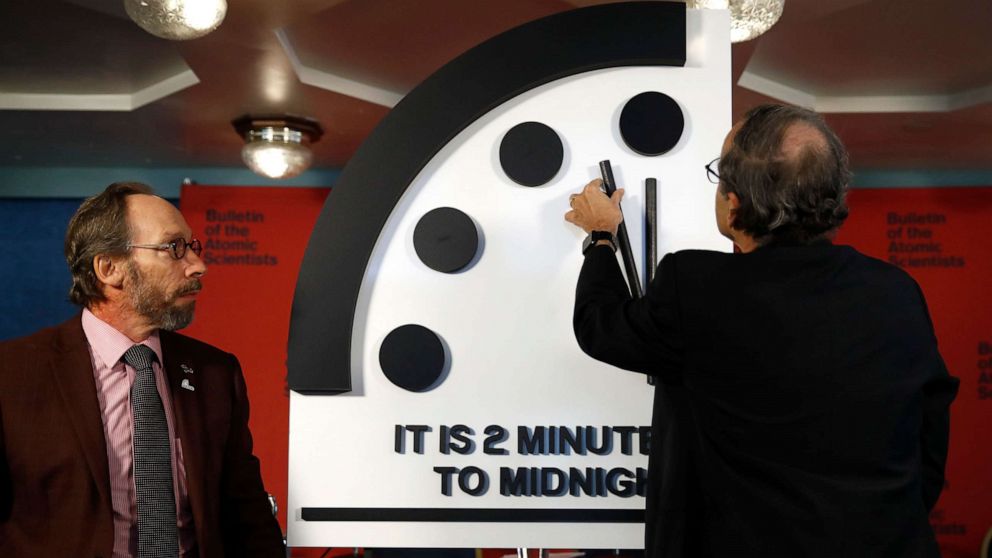 We may not be any closer to the apocalypse this year, but things aren’t looking up either, according to scientists.

The Bulletin of the Atomic Scientists said its 2021 “Doomsday Clock” remains at 100 seconds to midnight.

This year, COVID-19 is to blame for humanity remaining scarily close to a global meltdown, according to the group, which is comprised of world leaders and Nobel Laureates.

“The pandemic revealed just how unprepared and unwilling countries and the international system are to handle global emergencies properly,” scientists said in a statement. “In this time of genuine crisis, governments too often abdicated responsibility, ignored scientific advice, did not cooperate or communicate effectively, and consequently failed to protect the health and welfare of their citizens.”

Climate change and nuclear warfare, amplified by a rampant spread of disinformation on the internet, were also on the list of scientists’ concerns.

“The existential threats of nuclear weapons and climate change have intensified in recent years because of a threat multiplier: the continuing corruption of the information ecosphere on which democracy and public decision-making depend,” they said.

When the “Doomsday Clock” was established in 1947, it was initially set at seven minutes before midnight. The time has been adjusted forward and backward over the past seven decades.

The farthest the clock has ever been from midnight was 17 minutes in 1991, after then-President George H.W. Bush and Soviet President Mikhail Gorbachev both announced reductions in the nuclear arsenals of their respective countries.