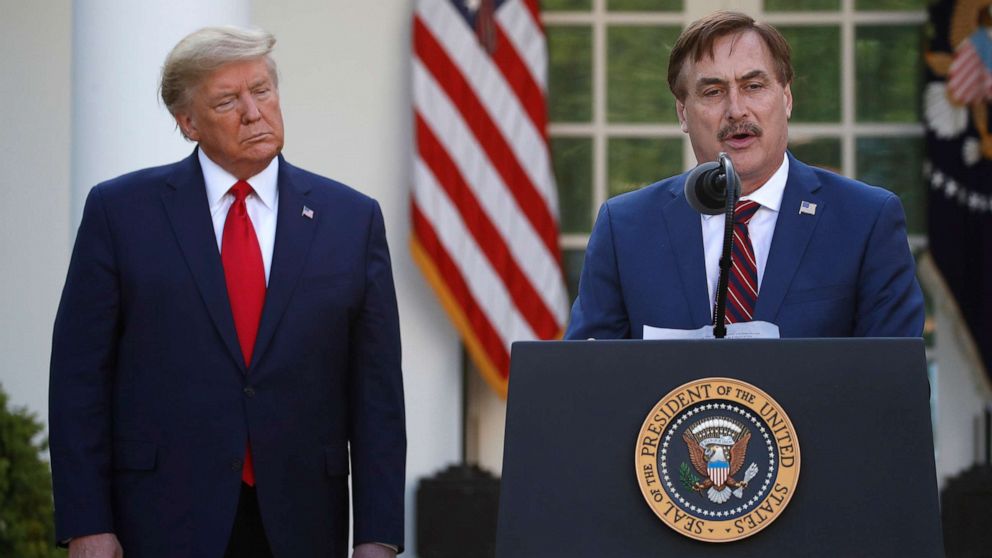 A Minnesota pillow company famous for its infomercials suddenly became embroiled in political controversy as its CEO refused to back down from ardently defending former President Donald Trump and baseless claims of election fraud.

My Pillow CEO Mike Lindell was permanently banned from Twitter earlier this week for peddling unfounded claims that Trump won the election. The social media giant had permanently barred Trump earlier this month in the wake of the deadly Jan. 6 mob attack at the U.S. Capitol.

The embattled chief executive said in an interview with the right-wing media outlet Right Side Broadcasting Network that some retailers have now stopped selling his products.

Here’s how the company arrived at this politically charged flash point.

Lindell had been a vocal Trump supporter for years, often attending campaign rallies and showing support for the former president on Twitter. As most firms shied away from public political positions — and distanced themselves even further from Trump after the mob attack three weeks ago — Lindell’s undying loyalty thrust his company into the spotlight.

The CEO has been one of the most prominent voices in corporate America as he peddled baseless claims about election fraud, calling for the results of the vote to be overturned. He told ABC News earlier this month that his company sponsored a “March for Trump” bus tour in November and December for the group behind the rally on Jan. 6 that preceded the attack on the Capitol.

Lindell also told ABC News he contributed more than $650,000 of his own money toward Sidney Powell’s legal efforts to overturn the election. The pillow maker also had previously called for “martial law” in a since-deleted, post-election tweet.

The saga heightened after a photo of Lindell carrying a document appearing to detail actions to overturn the election results went viral on Twitter.

On Jan. 15, Lindell was seen outside the Oval Office with a document appearing to detail drastic actions just days prior to Joe Biden’s inauguration. Lindell confirmed to ABC News that he met with Trump and presented him with a separate packet filled with theories regarding election hacking. The theories are related to repeatedly discredited claims that Trump won the 2020 election.

Lindell told ABC News after the meeting with the president that it was “real fast” and that afterward Trump told an official to take the CEO to speak with White House lawyers and review Lindell’s document.

Lindell said that when he was brought to speak with “the lawyers” they “all of a sudden they got busy,” and that’s when he walked outside and a Washington Post photographer snapped a photo of him snagging a glimpse of another document, which he claims comes from one of the attorneys he said he’s hired to investigate election fraud but would not identify to ABC News.

This photograph quickly went viral on Twitter after users speculated the document showed mentions of “martial law” and the “insurrection act.”

“There was no mention of martial law,” Lindell told ABC News. However, the photographed portion of that document appears to mention “martial law” and the “insurrection act.”

Another section of the notes appears to read, “Move Kash Patel to CIA Acting” and “Make clear this is China/Iran.” Much of the notes aren’t visible in the photo.

When asked if he read the document that appeared to have detailed drastic actions the president could take days before leaving office, Lindell told ABC News, “I glanced at it.”

“I’m going to be honest. I read that — I don’t know the names. I don’t understand half the stuff on there,” he added.

Lindell said the photographed document was just a part of the bigger packet he had brought to the White House, and that his main intention was to show the president an article that alleges multiple foreign countries hacked the 2020 U.S. election. He said during the brief time he had with the president, he spoke to him about this article.

Meanwhile, White House sources stressed nothing Lindell presented was taken seriously nor would it be acted upon by administration officials.

Lindell, meanwhile, seems to think he was barred from Twitter for different reasons, telling ABC News that he was removed after “I put up a nice thing that an employee of mine had written about me,” suggesting this was the reason for his suspension and not writing posts that violated Twitter’s terms of service.