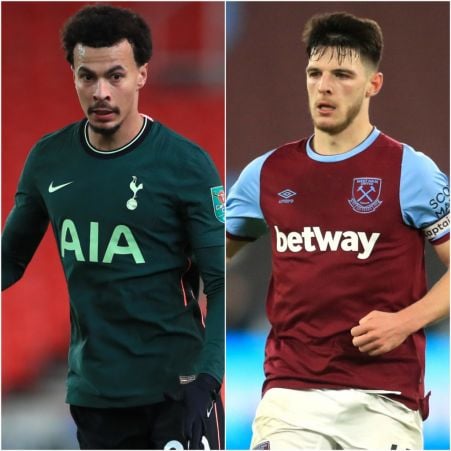 Paris St Germain are believed to be confident of securing Dele Alli from Tottenham ahead of the upcoming transfer deadline. The Daily Mirror says boss Mauricio Pochettino is determined to bring the 24-year-old midfielder to France on loan for the rest of the season.

West Ham bosses are of the impression Chelsea will drop their interest in Declan Rice following Frank Lampard’s exit from Stamford Bridge. According to The Daily Telegraph, the 22-year-old midfielder was high on the former manager’s wish list, but club bosses are not of the same opinion.

The Daily Mirror reports Leicester are hopeful of finally securing long-time target James Tarkowski from Burnley. The 28-year-old defender has 17 months left on his contract but is yet to re-commit to the Clarets, leaving the Foxes with a window to try and land him this summer.

It is believed to be down to a two-horse race for Manchester City defender Eric Garcia. The Daily Express, via Spanish outlet Mundo Deportivo, says Arsenal and Barcelona are the leading candidates to nab the 21-year-old at the end of the season.

Christian Benteke: Sky Sports reports the 30-year-old striker is expected to stay at Crystal Palace, despite interest from West Brom.

Jonjoe Kenny: Burnley are maintaining their interest in the Everton defender, according to the Liverpool Echo.