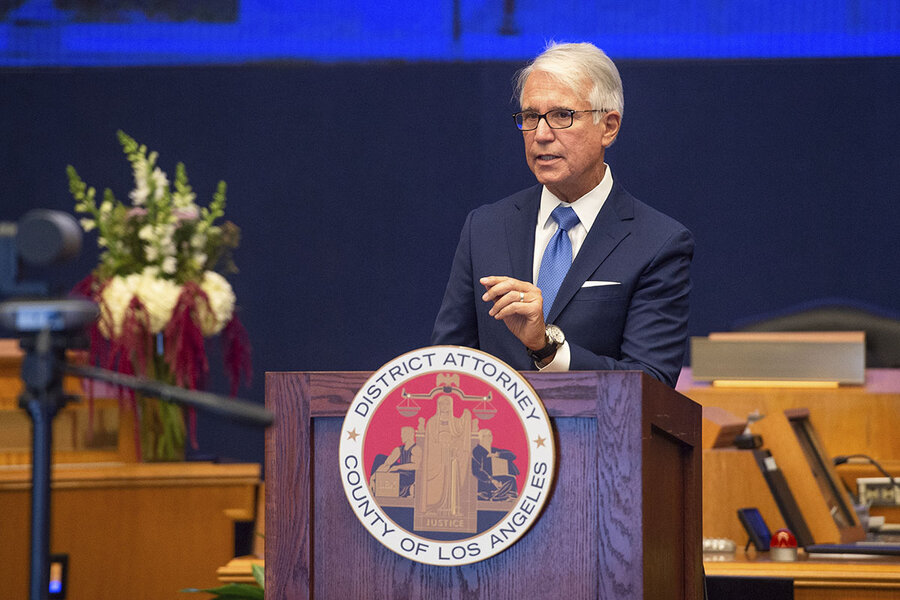 On the day of his swearing-in last month, he announced several new policies for the office, eliminating the use of cash bail for nonviolent offenses and banning prosecutors from seeking sentencing enhancements in most cases. He declared that the office would no longer pursue the death penalty or try juveniles as adults, and he launched a review of thousands of cases to consider potential resentencing and to look for wrongful convictions.

Mr. Gascón, a former LA beat cop who later served as San Francisco’s police chief and its top prosecutor, remains undaunted. He won election in November on the strength of his reform agenda – defeating a more traditional, “tough-on-crime” incumbent – and belongs to the growing ranks of progressive prosecutors who have vowed to reimagine criminal justice in America.

The Monitor spoke with Mr. Gascón about the human and financial costs of mass incarceration, the effect of George Floyd’s death on reform efforts, and his quest to “raise the integrity” of the criminal justice system. This interview has been edited and condensed.

You campaigned on a platform of change across a range of issues. What principles inform your overall philosophy?

The direction I want the office to take is deeply rooted in the belief that people can be rehabilitated and redemption is possible. Offering people a path to redemption is not only the humane thing to do but it’s the right thing to do for our public safety.

We have a system that – especially in the last few decades – has been very heavily leaning on the punitive side of criminal justice, and we have seen over and over again very high rates of recidivism, which creates more crime and more victims. We’ve also seen this punishment-based approach take funding and resources away from all the other services that create more sustainable, more livable communities – public health, education, public housing, social services. All those areas have suffered the consequences of our very heavy-handed, very punitive, very carceral approach to our work.

What was the impact of George Floyd’s death and the ensuing racial justice protests last year on the political fortunes of progressive prosecutors?

There’s no question that the message that myself and others have been talking about for years started all of a sudden to resonate with a broader segment of our population. George Floyd’s murder shocked the conscience of this country, including in many places where people perhaps were not thinking about these issues. And Black Lives Matter has crystallized the inequities and the inherent racism in so many parts of our community, and has made those issues a mainstream conversational item. The movement for progressive prosecutors has certainly benefited from this moment in history.

The emphasis on victims’ rights in recent decades has contributed to longer prison sentences. Are you trying to reset the balance in weighing the rights of defendants?

District attorneys are the people’s lawyers. We’re not the lawyer for one group over another. When we’re talking about victims, yes, we are there to represent the victim, but we’re not there to effect vengeance in the name of one victim.

So it’s really having that very deep conversation with yourself as a prosecutor and as an office, and understanding that we’re the people’s lawyers. That means the people, plural, not one single individual or one class of people. We’re impacting our entire community – including, frankly, the person who is being accused. We have a responsibility to that person as well as his or her family in the community.

That brings up something you mentioned during your swearing-in – your desire to “reinvigorate the presumption of innocence.” What do you mean by that?

The single-dimensional approach to quote-unquote “protecting the victim’s rights” often ignores our obligation to due process and the constitutional concept of presumed innocence. We often have thrown that out the door as prosecutors and basically said, “That’s not our work, that’s the work of the defense.” And we know that [public] defense in this country is thoroughly underfunded, and that’s why we have so many wrongful convictions.

We need to start thinking clearly that, as the people’s lawyer, we’re supposed to be protecting everybody – not only the victim that is here with you but also future victims as well as the person that is accused and the rest of our community. We have a moral imperative to represent the entire community.

The estimated cost of mass incarceration in the US exceeds $180 billion a year, and LA’s public protection budget is $9.3 billion. How might the reforms you’re pursuing reduce that spending?

The biggest problem in the criminal justice system is that most people only see the front-end costs – the budget of the DA’s office or the police department, which are high enough as they are. But what is often not seen are the downstream consequences of our work.

When the district attorney seeks to send someone to prison for five or 10 or 20 years, there are financial and resource costs for every year of that sentence. If you can fix the problem in five years but you send someone to prison for 15 or 20, what you’re doing is extending the financial impact. In a county like LA, you’re dealing with thousands and thousands of people – we have over 100,000 cases every year – and when you start sending thousands of people to prison, you are actually writing billion-dollar checks for future generations to pay.

What’s the purpose of the case review you ordered beyond the possible effect on individual inmates?

One of the problems we’ve seen is the lack of legitimacy of the criminal justice system in many parts of our communities, for many good reasons: the excesses of policing, especially in African American communities and other communities of color; the impact of over-incarceration in some parts of our population that clearly has racial overtones.

So for us to take a step back and say, “We’re going to see whether we got it right, and if we didn’t, we’re going to admit it” – it starts to bring a new level of credibility in communities that, quite frankly, believe that we’re not there for them. It also offers an opportunity for us as prosecutors and as a criminal justice system to open up to our communities and say, “We’re willing to rethink what we did before.” And whether we may have been right or perhaps in some cases wrong – either way, we’re willing to reconsider and reevaluate. When you do that, you raise the integrity of the system overall.