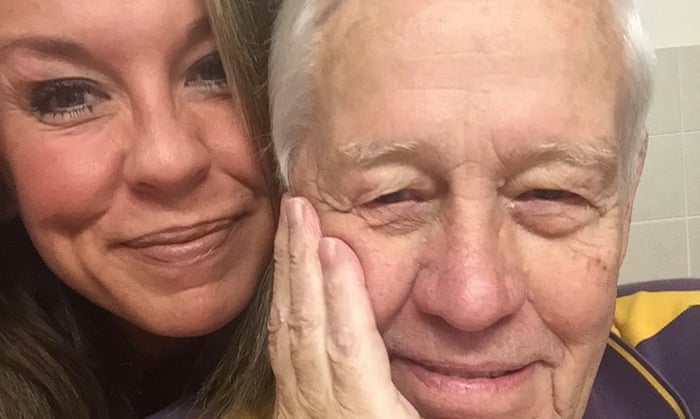 My dad, Cliff Anderson, 88, was twice misdiagnosed and sent home from hospital a week before he died with Covid.

On the first occasion he was diagnosed with hypoglycaemia. He was diabetic, but religious in taking his medication, so I thought that was rubbish.

On the second, his notes said he had a chest infection, an unexplained dry cough and shortness of breath. I thought it could be Covid, but the tests were negative.

On the third occasion he had collapsed with an enormous Covid-induced stroke. The ambulance took four and a half hours to arrive at his home in Higher Shotton, north Wales.

And that was the last I saw of my dad. The consultant rang to say: “Your father has had a significant left lobe stroke and he’s Covid positive, and has Covid pneumonia.” And I just thought: “I’ve known this for a week. A week!” He had typical symptoms for the elderly.

He was a man of very few words. But when he did speak about what was happening, when he talked about what he saw on the television, he said: “We’re expendable.” And this is what sticks in my mind now. My dad’s view was, “We’re being written off. I don’t count any more. The way this government speaks, it’s like we don’t matter.” He had seen this with his own eyes.

So, when Boris Johnson apologises, when he says the government did everything it could, that is meaningless. He’s done nothing, at every juncture.

Dad had always been phenomenally fit. He married his childhood sweetheart, our mother, Jean, and they raised four children. He was a devoted grandfather. After he retired as an electrical engineer from BNFL (British Nuclear Fuels Ltd) they moved to the south of France. They came back in 2015.

But mum has advanced dementia and he was her main carer. She still doesn’t know her husband of 67 years has died.

Dad was admitted on 11 January, and he died on 16 January. He fought immensely hard.

We had kept him safe for almost a year. He was shielding. My mother was shielding. My sister, who was also shielding for health reasons, would go in to help. But the rest of us stayed away. We didn’t even visit at Christmas, just dropped food off on the doorstep.

We think he got it from an asymptomatic carer, who was helping my mother.

After he was sent home from hospital on the first two occasions in early January, we went to help look after him and our mother. By the time he died, we were all infected, my mother, my sister, my brother, my husband and me.

While he was in hospital, my brother did manage to FaceTime him. He said he was reaching out, stroking the screen. He wasn’t a candidate for a ventilator. He had had a heart valve replacement, and he was 88. And I agree, it would have been cruel to try and ventilate him.

When we got the call to say he was declining and it wouldn’t be long, he was unconscious. I just had the nurse go and whisper something into his ear. We couldn’t go in. We all had Covid.

It’s just diabolical how quickly this ripped through my family, and how cruelly we were denied the opportunity to be with my dad in his last moments. He didn’t deserve that.

And the thing is, he didn’t have to die. We’d kept him safe for a year. Now we’re faced with putting my mum into a care home next week on the day before her husband’s funeral. We can’t grieve, none of us can see each other, and we’re planning his funeral on WhatsApp.

Today, I am just so angry at Boris saying he couldn’t have done any more. He hadn’t closed the borders. Only now, almost a year on, he’s talking of closing them. There was no PPE for carers or doctors, exposing frontline staff to enormous viral load like cannon fodder. There was no testing until it was way way too late. There was “eat out to help out”. There was changing the rules constantly. There was backing that amateur, Dominic Cummings.

I see Johnson’s father has had two vaccines. My dad never even got his letter. He still hasn’t.

The futility and inability and helplessness at not being able to do anything more to protect my dad – that feeling of helplessness will never ever leave me.

My father’s death was avoidable. We’d kept him safe for a year. He wasn’t a bloody number. He was always a fierce advocate for the underdog. He spoke out for justice.

And what really hurts me in all of this is that he was right. We are expendable.