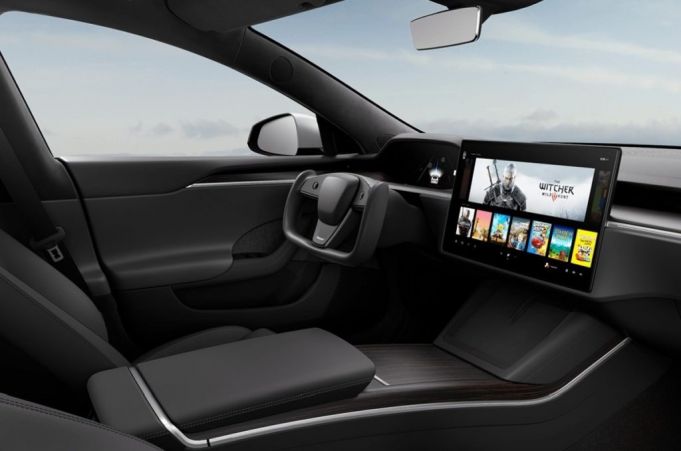 The Model S, which has been around since 2009, is clearly a cornerstone of Tesla’s ‘evolution not revolution’ approach to vehicle development. While it remains much the same on the outside (bar the addition of new bumpers, and the return of the panoramic glass roof option), inside and under the skin, there are some major changes.

The biggest of which is the addition of a top-spec ‘Plaid’ model with three, rather than two, electric motors, one at the front and two at the rear. That layout allows for almost infinite adjustment of which wheel gets what power from the upgraded battery pack, and the most expensive Plaid + model now develops 1,100hp and can sprint to 100km/h in, Tesla claims, less than 2.1 seconds. Top speed? A claimed 320km/h “with the right tyres.”

The name? That’s an old Mel Brooks joke. Just as Tesla lifted the ‘Ludicrous Speed’ gag from Brooks’ 1987 sci-fi  spoof ‘Spaceballs’ so Plaid comes from the same source — in fabric weaving speak, plaid is one step up from warp and weft. So it’s one higher than warp speed, geddit?

One-charge ranges have also increased. A Long Range model will go for a claimed 663km on the WLTP test, while a Plaid can manage a claimed 628km. The Plaid +? A whopping 840km on one charge, if Tesla’s claim is to be believed.

“It’s really a tremendous improvement over the prior version” claimed Tesla’s owner, Elon Musk at the investor call where the new car was revealed. “Over the past few weeks, we have been upgrading our Fremont factory to launch the new Model S and Model X. These changes include a new powertrain [with new] battery modules, battery packs, drive units, an entirely new interior, exterior updates and other improvements” said a Tesla spokesperson.

Inside, the central touchscreen is new, and has changed from an upright ‘portrait’ style to a horizontal ‘landscape’ style. Tesla claims that the screen is now as powerful, in computing terms, as a Sony PlayStation 5 and has been set-up for gaming and entertainment streaming. There’s also a new, smaller screen for rear-seat passengers.

Presumably such improved streaming and gaming options have much to do with Elon Musk’s claim, at the reveal of the new Model S, of full hands-off,  eyes-off, Level 5 autonomous driving by the end of this year. Musk has been known to be, shall we say, wide of the mark with such grandiose claims in the past, however.

While the Model S retains the instrument panel in front of the driver (unlike the Model 3, which has done away with it entirely) the car’s new steering wheel is bound to generate some controversy.

In fact, it’s not a wheel at all now, but a cut-off, slightly square control yoke, not unlike what you’d  find in a modern airliner, or a Formula One racer. Indeed, rather like an F1 racer the plan is to move most of the car’s controls onto  the steering wheel, with two multi-function click-wheels. Even traditional column stalks have been eradicated.

Quite how the steering ‘control’ will work remains to be seen. Tesla  hasn’t mentioned any new steering system as yet, but it’ll either have  to be so quickly geared that it will be race-car-twitchy to drive, or it may  adopt a BMW-style adaptive steering system with a variable ratio rack (as originally launched on the 2002 E60 5 Series).

Irish prices start from €90,990 for the two-motor Long Range, rising to €119,990 for a Plaid, and €140,990 for a Plaid +. A February delivery is being quoted in most markets, but Tesla does warn that “delivery timing depends on configuration options and delivery location.”

Tesla says that it expects an average of 50 per cent growth in sales per year as it rolls out these new Model S and Model X versions, continues the international launches of the Model Y medium SUV, and gears up for the launches of the new Roadster supercar and the Cybertruck pickup.

That would be colossal growth for any company, let alone a carmaker, and yet Tesla is predicting even faster growth than that for this year alone.

In spite of that, Tesla’s now-legendary share value dipped by three per cent in the hours after the Model S and Model X launch, and the reported Q4 earnings of $10.74 billion. Production had actually fallen at the end of last year as the Freemont factory was refitted for the new models.