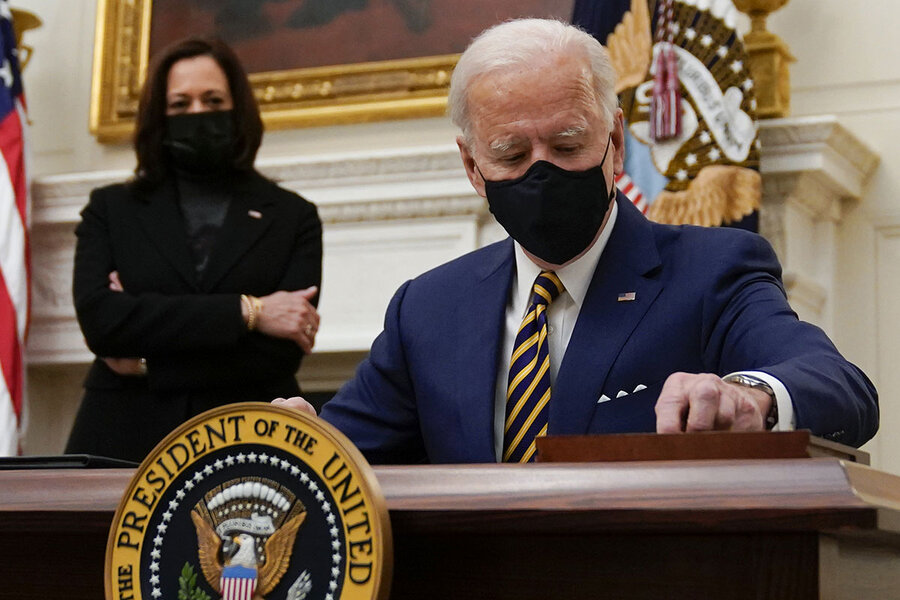 “The founders of our republic did not want to put that much [power] in the hands of a single leader,” says Mark Rozell, a professor at George Mason University and an expert on presidential power. “America’s addiction to executive power has become dangerous for this country.”

“President Biden has a unique opportunity,” he adds, “to put forward a process that will establish the presidency as a more modest power in our system of separated powers.”

Former President Trump’s demagogic tendencies pushed the presidency’s institutional and cultural power further than ever before, but President Biden has already been flexing his executive muscles, signing 17 executive orders, memorandums, and proclamations within hours of his inauguration.

This is what America’s founders, fresh from monarchical rule, feared. Suspicious of centralized power, they distributed it throughout the government and the states.

The country has grown a lot since then, evolving from an insignificant international player into a superpower both militarily and in a globalized, fast-paced economy. Amid this general evolution, and stimulated by crisis, the executive branch has taken – and been given – more power.

Presidents have taken a more active role in the American economy, highlighted by Franklin D. Roosevelt’s New Deal policies during the Great Depression, which created agencies like the National Labor Relations Board and the Securities and Exchange Commission.

Presidents have also taken charge of initiating foreign wars. Congress hasn’t declared war on anyone since World War II. The war authorization George W. Bush secured from Congress right after 9/11 has been used to justify the majority of U.S. military actions in the Middle East ever since. Barack Obama and Mr. Trump used executive orders to advance much of their policy agendas around a deadlocked Congress – and Mr. Trump did so even during his first two years, when Republicans controlled both houses of Congress.

Indeed Congress – specifically the two-party system – has done as much as presidents themselves to enable presidential power to grow. As polarization has intensified, members of the president’s party in Congress have frustrated the legislature’s ability to check the executive, says Kermit Roosevelt, a professor at the University of Pennsylvania Carey Law School.

“So long as Congress is relatively evenly divided, and the executive is unified, Congress is going to be at a disadvantage,” he adds.

Why “you had the mobs”

But what the Jan. 6 siege of the Capitol manifested, in striking fashion, was an intangible product of the decades of expanding president power: its cultural effect.

Through technological advancements, presidents have been able to communicate with the public with greater frequency and intimacy than in the past. Roosevelt had “fireside chats” over the radio, later presidents had television, and until recently, Mr. Trump had Twitter.

With the 24-hour news cycle, the president has become almost omnipresent, and, in some cases, a celebrity. Of the 45 former presidents, only the most recent 14 are enshrining their legacies in presidential libraries.

And as the presidency has assumed more power and publicity, the public has invested in the Oval Office more of its hopes and fears.

“That’s why I think you had the mobs” on Jan. 6, says Dana Nelson, a professor of English at Vanderbilt University.

“People have become so focused on controlling federal power that it was an act of desperation completely keyed around the presidency.”

Just look at midterm elections. Since 2000, turnout has been 60% lower on average than in presidential election years. Two important exceptions: 2010 and 2018, when the largest number of midterm voters since the 1960s turned out to switch the House away from the party of a president the opposition viewed as overreaching his powers.

Voters have a “fantasy … that if they get the right person in office they’ll fix everything,” says Dr. Nelson, author of “Bad for Democracy: How the Presidency Undermines the Power of the People.”

“That fantasy,” she adds, “keeps getting more and more powerful with each iteration of the presidential cycle.”

It’s important to note that, in some respects, the growth of executive power has been necessary and beneficial. A president can act with more speed and flexibility than a legislature that needs a majority consensus – a necessity in a globalized, modern world.

“We need a much more powerful president than the framers anticipated,” says Professor Michael Klarman, a legal historian at Harvard Law School, “but we may have moved too far in that direction.”

There have been small signs that the United States could see movement in the other direction. The Trump years, ironically, have witnessed “a reorientation of some of the presidency’s important powers and responsibilities,” wrote Jack Goldsmith and Samuel Moyn – law professors at Harvard and Yale Law schools, respectively – for The Atlantic.

The Senate voted across party lines in 2019 to end U.S. support for Saudi Arabia’s war in Yemen (though Mr. Trump vetoed it). And in December 2020, Congress overrode his veto to approve an annual defense budget that included provisions cracking down on his use of emergency powers to divert military funds to a border wall and, over his objection, renaming bases named after the Confederacy.

President Biden has pledged to end “the forever wars” in the Middle East and U.S. support for the war in Yemen.

A more challenging shift on executive power, however, may be getting the American public to shed what Dr. Rozell describes as the country’s “infatuation” with presidential power.

“It was only going to happen when people turned their attention away from the federal, and specifically the executive stage,” says Dr. Nelson. “People just seem unable to do that.”

Dr. Rozell is a bit more optimistic, however, that we may now be in a Goldilocks zone for reducing executive power, where conditions are just right. Democrats control the White House and (narrowly) Congress, President Biden has long-term relationships with some Republican leaders, and there is “the strong likelihood” that Mr. Biden only serves one term, and can operate free of the pressure of reelection. And there is the memory of fanatical supporters of a president storming the Capitol.

“Scholars have been warning about the dangers of the rise of a too-powerful presidency. … Many members of Congress have talked about these issues,” he adds. “If not now, when?”