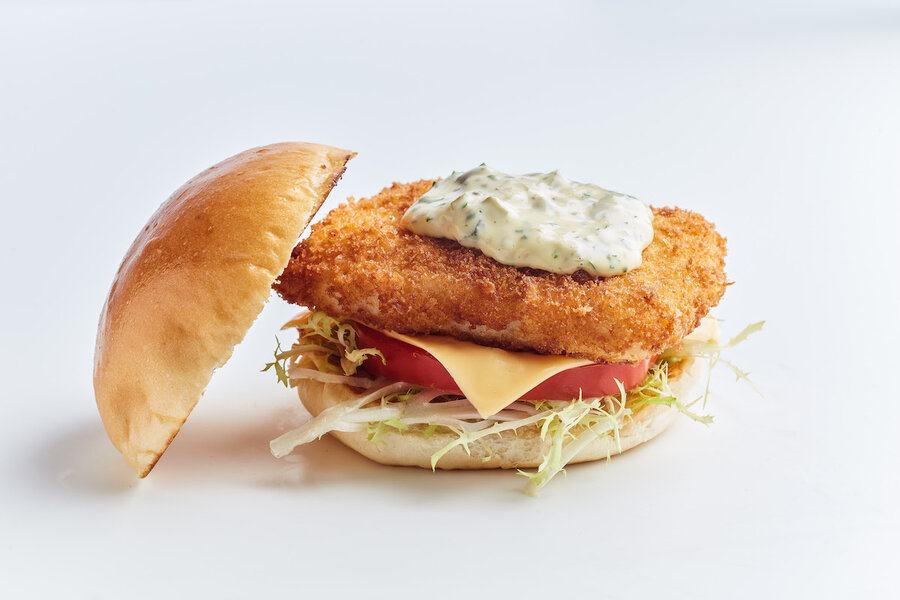 When chef Eddy Leung was tasked with cooking what was touted as the world’s first lab-grown fish filets in his kitchen in southwestern Hong Kong, he pan-fried some and deep-fried others before finally deciding on breaded fish burgers with tartar sauce.

“Before I cooked the fish it was quite firm, but after I cooked it the texture changed to being like real fish,” Mr. Leung said of the culinary experiment that took place in the gritty Wong Chuk Hang neighborhood late last year.

The filets tasted and smelled like normal fish, but with the consistency of crab cakes, he said.

“Cultivated meat gives consumers the animal protein they want without having to deplete the oceans or chop down the rainforest to get it,” she said.

The fish tasting came on the heels of Singapore’s announcement in early December that it had become the first government to approve cell-cultivated chicken, leading to the world’s first commercial sale of lab-grown meat, also known as “clean meat.”

In a report published last year, GFI said economic growth and rising incomes are expected to drive Asia’s appetite for traditional meat and seafood up nearly 80% by 2050.

While lab-grown meat is just beginning to gain ground, a University of Oxford study in 2011 found cultured meat could lower energy use in meat production by up to 45%, greenhouse gases more than 78%, land use 99% and water use up to 96%.

However, other researchers have said the green benefits of cultured meat are overestimated, not least because it can be energy intensive to produce.

Cultivating fish in a lab can be done in a fraction of the time it takes to produce fish normally, said Carrie Chan, Avant’s co-founder and chief executive officer.

Most farmed fish take between a year to two years to grow, depending on the species, while wild fish take longer, she told the Thomson Reuters Foundation.

For Mr. Leung’s tasting, however, Avant cultivated about 10 filets in approximately two months.

To make the filets, the company put cells from a grouper fish into a bioreactor and fed them glucose, minerals, amino acids, vitamins and proteins – much like making beer or yogurt, said Avant co-founder and chief scientific officer Mario Chin.

The cells then grow into muscle tissue – without heads, fins or organs.

This appeals to companies looking for stable prices and predictable volume to help them overcome volatility in food supplies, as well as those wanting to source closer to consumers, said J.Y. Chow, who leads Mizuho Bank’s efforts to finance agriculture and food projects in the region.

Governments can benefit, too, with the COVID-19 pandemic and trade conflicts showing the need to secure and localize food production.

“Now we can shrink the footprint to a single point where the bioreactor is,” said Ms. Chan at Avant.

The United Nations Food and Agriculture Organization said in a 2020 report that one third of the world’s fish stocks are overfished.

Other studies predict the ocean will have more plastics than fish by 2050, with levels of microplastics, heavy metals, and contaminants increasingly tainting seafood.

Concerns about animal rights can also help drive a switch to lab-grown meat.

“The whole notion that you don’t need to kill animals to eat protein from animals is a huge argument,” said Mr. Haefeli, who has invested in Avant.

The idea of eating lab-grown meat has become more palatable to consumers, especially in Asia, in recent years.

A 2019 survey published in the academic journal Frontiers in Sustainable Food Systems showed people in China and India were more open to consuming cultivated meat than consumers in America.

“The street food in Hong Kong is a bit scary. You don’t know what the source is,” said Minnie Cheung, a yoga teacher who tasted the lab-grown fish in Leung’s kitchen.

“If I wasn’t told it was cultivated fish, I would think it was gourmet-quality fish made into a burger.”

Still, many people are skeptical about eating lab-grown fish, both because it is not natural and because they believe it is genetically modified food.

But cultured seafood is not genetically modified, said Mr. Chow at Mizuho Bank – a point that highlights the importance of education and clear labeling in getting people to embrace cultivated meat.

“The critical point is not only to educate the consumer on the how – meaning the process and how safe it is – but also the why,” he said.

That includes explaining why alternative proteins are important and “what are the benefits for you, for animal welfare, for the planet,” Mr. Chow said.

As well as getting the right information to consumers, the success of cultivated meat and seafood will depend on getting the price right, Mr. Chow said.

Right now lab-grown fish – which is not yet available commercially – is set to supply a niche market, where consumers are willing to pay a premium, rather than the mass market, Mr. Chow noted.

But cultured meats have the potential to disrupt the $1 trillion conventional meat industry, according to a 2019 report from global consultancy A.T. Kearney.

The report predicted that cultured meats will make up 35% of global meat consumption within the next 20 years.

Industry insiders like Haefeli at Regal Springs hope that changing what people put on their plates will be part of a fundamental shift in attitudes toward the health of the planet.

“Will we look back and say, ‘Hey, people were still driving their own cars, they were still burning fuel for their cars, and they were still killing animals to eat protein’?” he asked in a video interview.