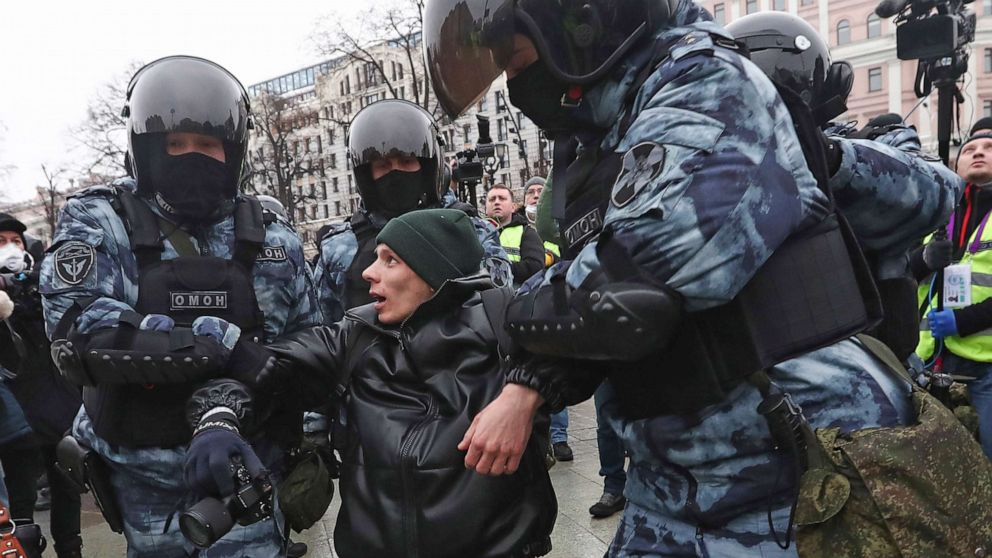 Russian authorities are moving to intensify the pressure on supporters of the jailed opposition leader Alexey Navalny ahead of a call for new protests this weekend, launching a wave of detentions and searches, including arresting Navalny’s brother, according to The Associated Press.

Navalny’s allies have called for a second round of nationwide protests this Sunday, hoping for a repeat of demonstrations a week ago that saw tens of thousands of people protest across Russia calling for Navalny’s release in one of the largest displays of public opposition the Kremlin has seen in years. The protests were met with a crackdown from authorities, who detained close to 4,000 people across the country.

Navalny, already president Vladimir Putin’s most troubling opponent, has forced a showdown since he returned to Russia just under two weeks ago, after recovering from his near-fatal poisoning with a nerve agent over the summer. Authorities detained Navalny as soon as he landed in Moscow and are now threatening to keep him imprisoned for years.

Ahead of Sunday’s protests, police have launched a wave of arrests and searches targeting pro-Navalny activists, as well as opening new criminal cases as part of a widening crackdown. Most of Navalny’s core team as well as a number of local organizers who were not already in jail following the first round of protests have now been detained. Police on Thursday arrested Navalny’s brother Oleg Navalny, and well-known activists Lyubov Sobol, Anastasia Vasilyeva and Maria Alyokhina from the protest group Pussy Riot.

The detentions accompanied raids that saw police conduct around two dozen searches at activists’ homes and offices, including Navalny’s apartment in Moscow while his wife Yulia was inside.

Police said they had arrested Navalny’s brother and the others on suspicion of violating health restrictions relating to the coronavirus epidemic. Oleg Navalny, Sobol and Alyokhina were reportedly ordered held for 48 hours. Several leading members of Navalny’s team are already serving short roughly two-week administrative sentences given them in advance of last week’s protests.

The Kremlin’s spokesman, Dmitry Peskov on Thursday, in response to questions about the searches and arrests, said “law enforcement agencies are doing their job”.

Navalny himself appeared on Thursday via video at a court hearing in Moscow where an appeal by his lawyers against his detention was rejected.

Navalny is detained on the grounds he had allegedly violated his parole terms of an old suspended sentence for a 2014 embezzlement conviction that has been widely criticized as politically motivated.

After arresting Navalny at the airport last week, authorities brought Navalny to a makeshift court that ordered he be held for 30 days pending the parole hearing that will decide whether to convert that 3 1/2 year suspended sentence into real prison time. The 2014 trial where the original sentence was handed down was later ruled as unjust by the European Court of Human Rights.

At the hearing Thursday, the judge rejected Navalny’s appeal and ordered he be held until the parole hearing that is scheduled to be held Feb. 2.

Speaking from the jail where he is being held, Navalny told the judge the original order to detain him was grossly illegal and that it would not deter him or others from challenging the Kremlin.

“A huge number of people, tens of millions of people agree with me. Yes, right now force is on your side,” Navalny said. “But this won’t continue forever.”

Prosecutors on Thursday also opened another criminal case against a key lieutenant of Navalny’s, Leonid Volkov, charging him with allegedly inciting teenagers to take part in an unauthorized public protest. Russia’s Investigative Committee said the charges are based on a video Volkov made calling for people to protest but it makes no reference to teenagers.

The arrest of Navalny’s brother, Oleg Navalny, was notable because he had previously spent years jailed as a hostage in retaliation for Navalny’s activism, according to rights groups. Oleg Navalny was sentenced to 3 1/2 years in prison as part of the same 2014 embezzlement case where Navalny was given his suspended sentence. Oleg was released in 2018.

Navalny’s arrest and the crackdown on protesters has triggered international criticism, with European countries and the Biden administration demanding Navalny’s release and that people’s right to demonstrate be respected.

The unusual scale of the protests last weekend and the prospect that they could continue poses an uncomfortable new problem for the Kremlin, analysts said. Navalny’s survival of the nerve agent poisoning and his decision to return have also greatly raised his status internationally.

“Following his poisoning in Siberia and treatment in Germany, Navalny has become Russia’s second voice abroad after Putin’s—and a politician on a global scale—and Western statements correspond to this new reality,” Alexander Baunov, a senior fellow at the Carnegie Moscow Center wrote in an article this week.

After Navalny’s arrest, his team released a new investigative film that describes what they say is a secret palace owned by Putin on Russia’s Black Sea. The almost two-hour film has now been viewed over 100 million times on YouTube.

That success and the protests last weekend indicate a broadening of dissent beyond the traditional opposition that is beginning to intrude into wider Russian society, some analysts said, posing a new difficulty for the Kremlin, which is being forced to respond.

“This is a more or less a new situation for the Kremlin,” Andrey Kolesnikov, a senior fellow at the Carnegie Moscow Center told ABC News this week. “The Kremlin must find some solution of this problem but right now they have chosen the line of suppression of civil society,” he said, adding he expected that would continue.