Greetings, radio amateurs- DIY !
Previously, amateur radio was a very popular trend – there were many circles where people from childhood were taught the basics of electronics, and having a soldering iron at home and the ability to use it was commonplace for almost every young person. Now electronics reached the level when it becomes simply unrealistic to repair some device at home – most of the devices are digital, moreover, they are made on extremely small SMD components that do not lend themselves well to manual soldering, which is partly why the need for knowledge of electronics has disappeared. Despite this, a huge number of amateurs around the world are engaged in the creation of not always useful (and sometimes even wrecking), not always practical, but extremely interesting and amusing designs – this includes, for example, a laser from a DVD drive, which will be discussed speech.
With the help of such a laser, you can set fire to matches at a distance of up to a meter, melt some plastics, rubber products, pop balls and burn wood. It doesn't make much practical sense – but it sounds pretty impressive. It is worth noting that such a laser, although not particularly powerful, is capable of causing significant damage to vision if you direct a focused beam into your eyes. Therefore, when testing and using the laser, you should be careful and wear protective goggles, extremely attentive to the direction in which the laser will turn on – there should be no people or animals. The headline states that the laser is made from extremely accessible parts – and this is really so, because the laser head itself can be obtained in almost any DVD writer from a computer. Now optical discs are a thing of the past, modern computers are not even equipped with disk drives, so getting such a drive is not difficult, many of them are available and are just idle, like a relic of the past. If the DVD drive is inside the case of the system unit, you need to remove it from there by unscrewing the fastening screws. You can ask for a cat:
The appearance of the DVD drive itself. All the insides are mounted inside a good metal case, it must be carefully disassembled, because the case can be used in other projects in the future.
Among all the internals of the drive, the next necessary part, inside which the laser head is located, its location is indicated in the picture by an arrow. 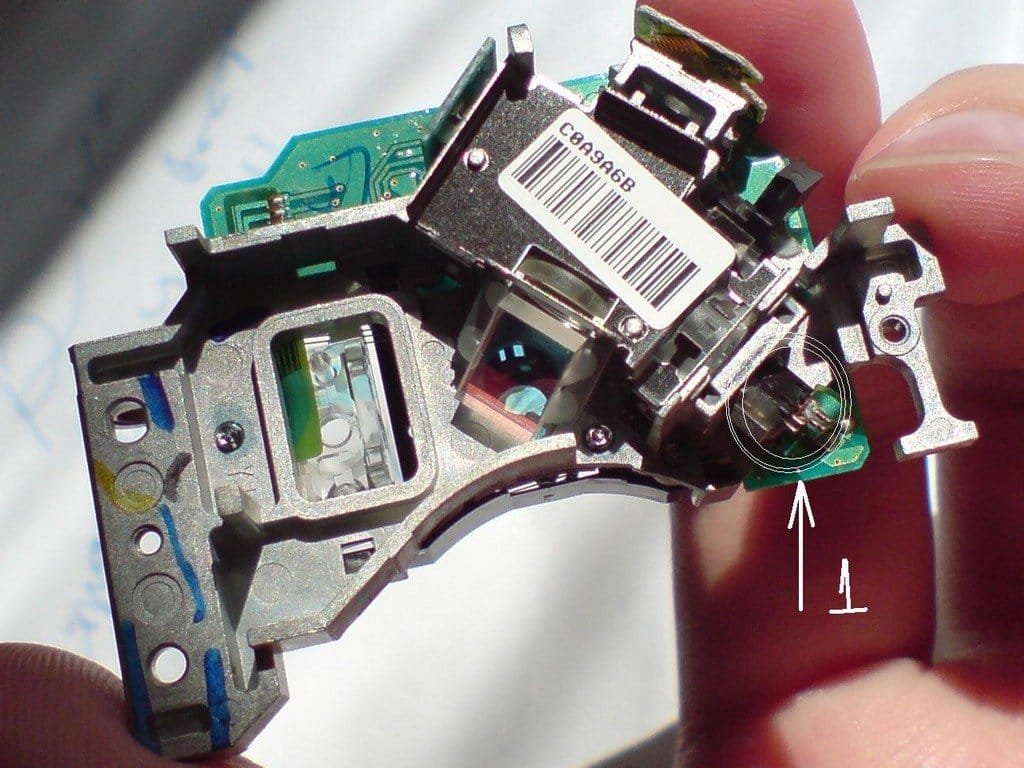 You should be careful when removing the laser head so as not to damage its leads or accidentally kill it by static electricity – laser heads are sensitive to static electricity, so it is advisable to use an antistatic bracelet , and after dismantling, close the laser head leads with a copper wire. However, the author did not take any measures to protect against static and this did not affect the operation of the lasers. The picture shows the appearance of what laser heads might look like. 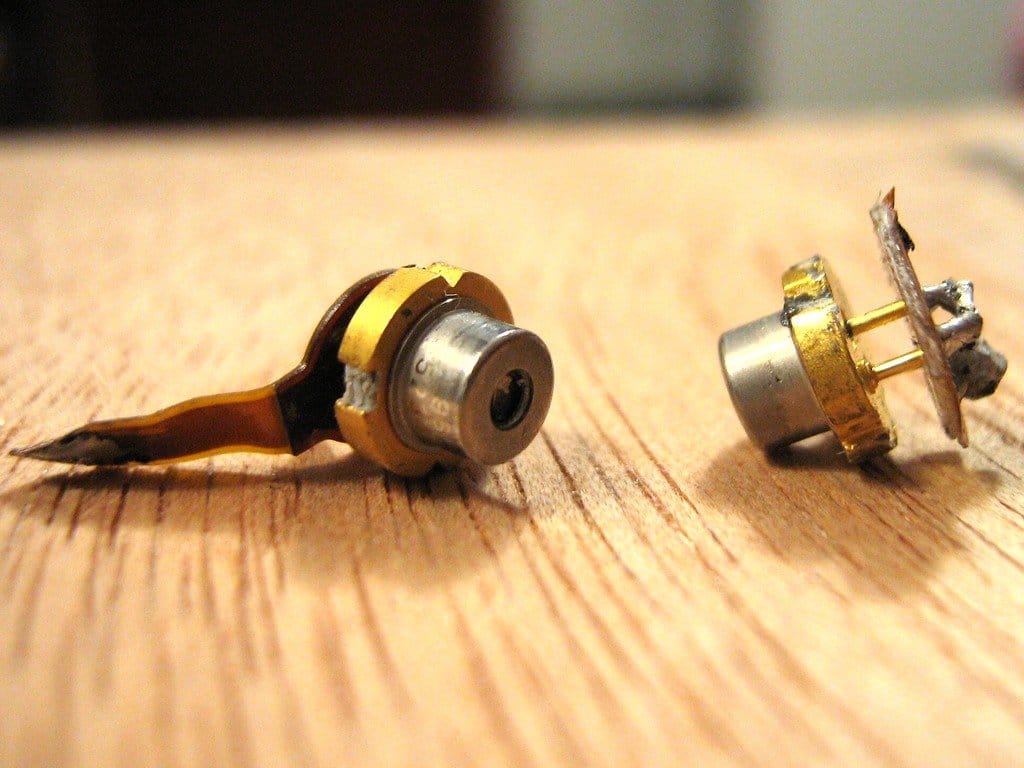 In order to get ready the laser is not enough just to apply voltage from the power supply to the head terminals – at least a current-limiting resistor is needed, and for convenience, you can also build in a battery to make the laser completely autonomous. All these conditions are met by the following scheme:

As you can see, the circuit connects directly to the 220V network to charge the battery and power the laser. If the circuit is disconnected from the mains, the laser will operate on battery power. In this variant, 3 pieces of Ni-MH or Ni-CD batteries are used, connected in series, their total voltage will be 3.6V. You can use common AA or AAA batteries. The circuit is connected to the 220V network through a quenching capacitor with a resistor, in this case, a quenching capacitor of 1 μF is used, its operating voltage must be at least 400V. The alternating voltage is rectified by a diode bridge – everything is like in a conventional transformerless power supply. Zener diode D814A limits the output voltage. The green LED is the battery charging indicator. A connected laser diode is visible in the right-most part of the circuit, it is turned on through a 2 Ohm resistor, it is due to this resistor that the current is limited. The maximum current of most laser heads from DVD drives is 300 mA, when this current is exceeded, they instantly burn out. Therefore, it is desirable to limit the operating current at 200 mA, for reliability, this can be done by selecting a 2 Ohm resistor. A momentary button is needed to supply voltage to the diode. 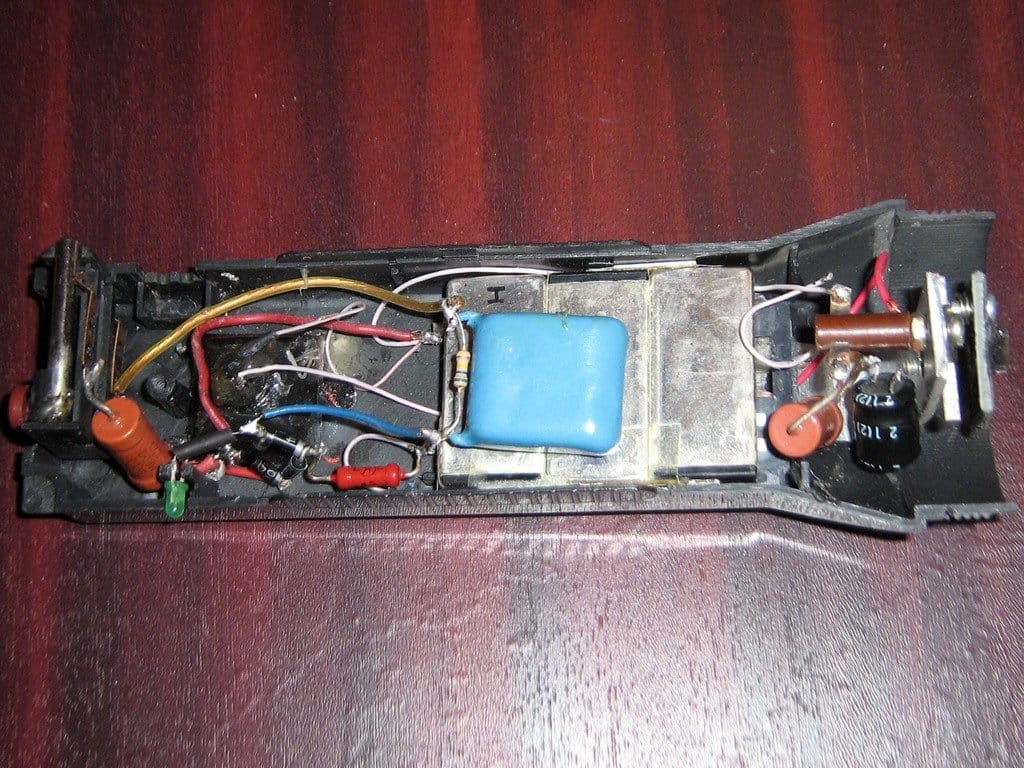 The entire circuit can be mounted in a suitable housing, for example, it is an unnecessary or faulty flashlight, the parts are mounted on a surface mount. Please note that when the circuit is connected to a 220V network, all electronic components will be under dangerous mains voltage, therefore it is important to ensure good insulation of the entire circuit. And special attention should also be paid to the quality of the installation, because an accidental short circuit can lead to a small explosion, for example, of a capacitor – with careful assembly, this will never happen. You should also not neglect the fuse included in the break in the supply wire – it can save in the event of a short circuit in the circuit. 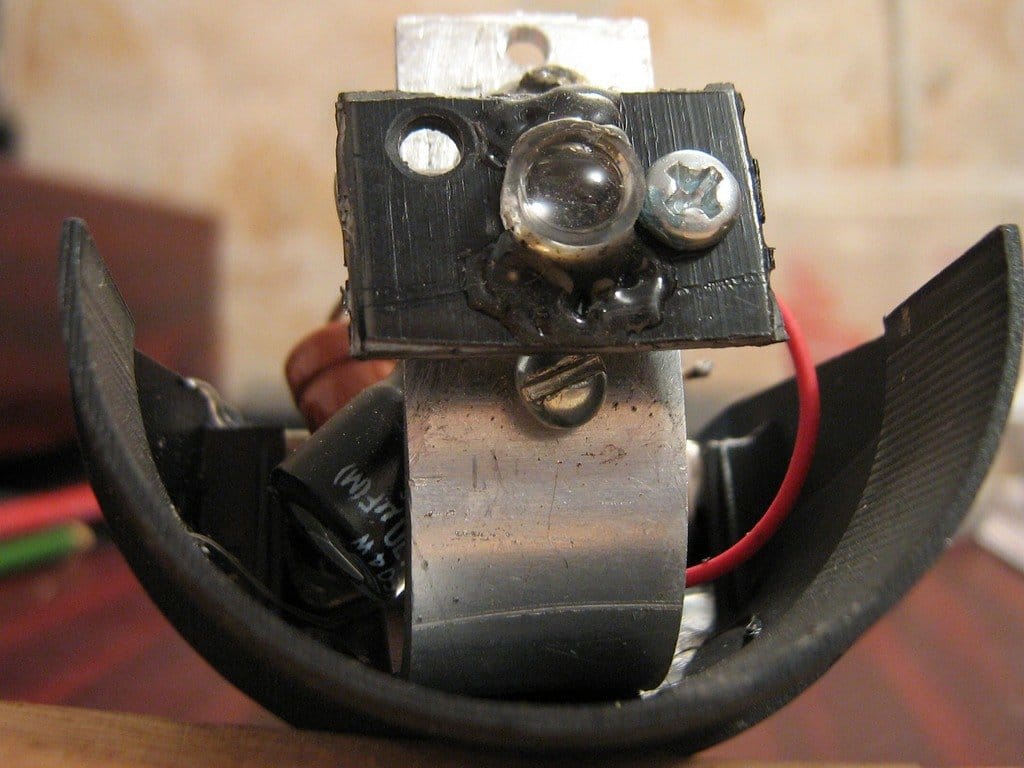 If you turn on the laser diode just like that, without a lens, it will shine with diffused light and will not give the desired effect. In order to focus the light beam, a laser pointer is ideal, it just has the right lens. These pointers cost very little and are sold on every corner. When installing the laser head in the housing, you should pay attention to cooling, because during operation the laser generates heat that needs to be removed somewhere. As a small radiator, you can use, for example, a piece of aluminum strip, which will simultaneously fix the laser in the housing. 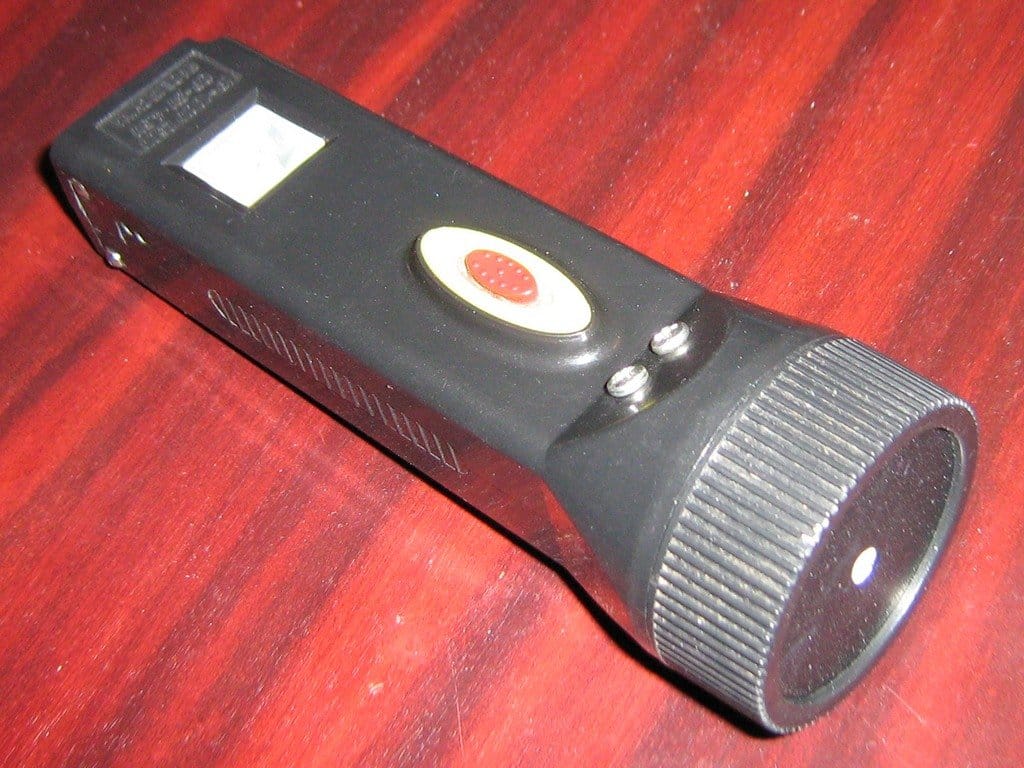 Then the case is closed with a lid; for the convenience of connecting to the network, it does not hurt to make the corresponding connector. Often it is not necessary to connect such a laser to the mains for charging – the batteries can provide a continuous laser operation time of several hours. The front part of the flashlight is covered with a screen; only a small hole is cut into it for the laser beam to exit. Thus, an interesting thing has turned out, collected literally from what is at hand. Happy build!