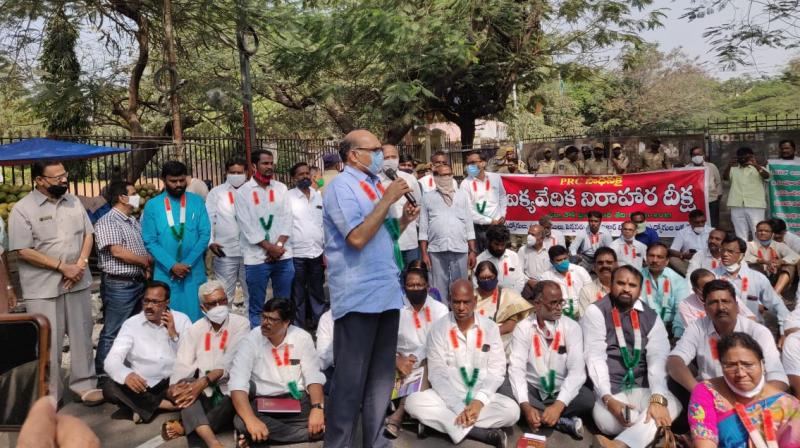 HYDERABAD: There is widespread resentment against the pay revision proposals mooted by the C.R. Biswal Committee to the extent that employees dubbed the report as a ‘pisinari’ (miserly) report.

As soon as the PRC report went viral on social media on Wednesday morning, employees and teachers’ organisations staged protests and some even tried to lay siege to the temporary Secretariat complex at BRK Bhavan here. In several districts, employees organised protest programmes.

Apparently taken aback, the state government sought to underplay the recommendations stating that a final decision would be taken by Chief Minister K. Chandrashekar Rao. Tourism minister V. Srinivas Goud, who was earlier an employees leader, assured that the Chief Minister would strive for the welfare of the employees and pensioners.

Maintaining that the Pay Revision Commission (PRC) report was leaked even before it was submitted to the state government, Chief Secretary Somesh Kumar directed Hyderabad police commissioner Anjani Kumar to probe into the leak.

Earlier in the day, leaders of various unions tore up the PRC report and raised slogans against the ‘anti-employee’ recommendations.

Teachers union leaders Harshavardhan Reddy and Indira Shoban tried to force their way into BRK Bhavan. Police took them into custody.
Rajender, chairman of the joint action committee of government employees,  announced that they would reject the report in particular the fitment of 7.5 per cent outright.

“It is an insult to employees, who will feel demoralised,” he said and hoped that the Chief Minister would take a decision keeping in view the sentiments and needs of employees.

Telangana Employees Association (TEA) president Sampath Kumaraswamy said the fitment was never so low in the undivided state. He said employees mistook the 7.5 per cent fitment as DA hike.

Opposition parties came down heavily against the state government for its “anti-employee” stand.

BJP state president Bandi Sanjay alleged that it was the Chief Minister who directed the PRC to recommend a low fitment of 7.5 per cent. AICC secretary Vasmshi Chand Reddy said that the minimum pay of `19,000 instead of `25,000 was ridiculously unfair. The PRC recommendations are nowhere close to meeting the increasing inflationary trends, he added.

Representatives of employees’ unions TNGO, TGO and Secretariat employees associations met Chief Secretary Somesh Kumar over the fitment and other recommendations made by the Pay Revision Commission headed by retired IAS officer C.R. Biswal soon after it was ‘released’.

They said the fitment recommendation of 7.5 per cent of the basic pay was condemnable.

Later, speaking to the media, union leaders M, Rajender and Mamata criticised the recommendations and pointed out that employees were expecting 43 per cent fitment and not a miserable 7.5 per cent.

They said it was grossly unfair to reduce the house rent allowance and minimum pay to Rs 19,000 from Rs 24,000. They said that the maximum pay limit should be extended up to Rs 2,19,000. The Commission has pegged at Rs 1,62,700.
The union leaders stated that within three or four days they would meet the Chief Minister and achieve a better PRC fitment. They appealed to the employees not to worry about the fitment suggested by the PRC.

Somesh Kumar released a statement saying that a three-member committee had met employees’ union representatives and heard their views. He said all related issues would be brought to the Chief Minister notice.