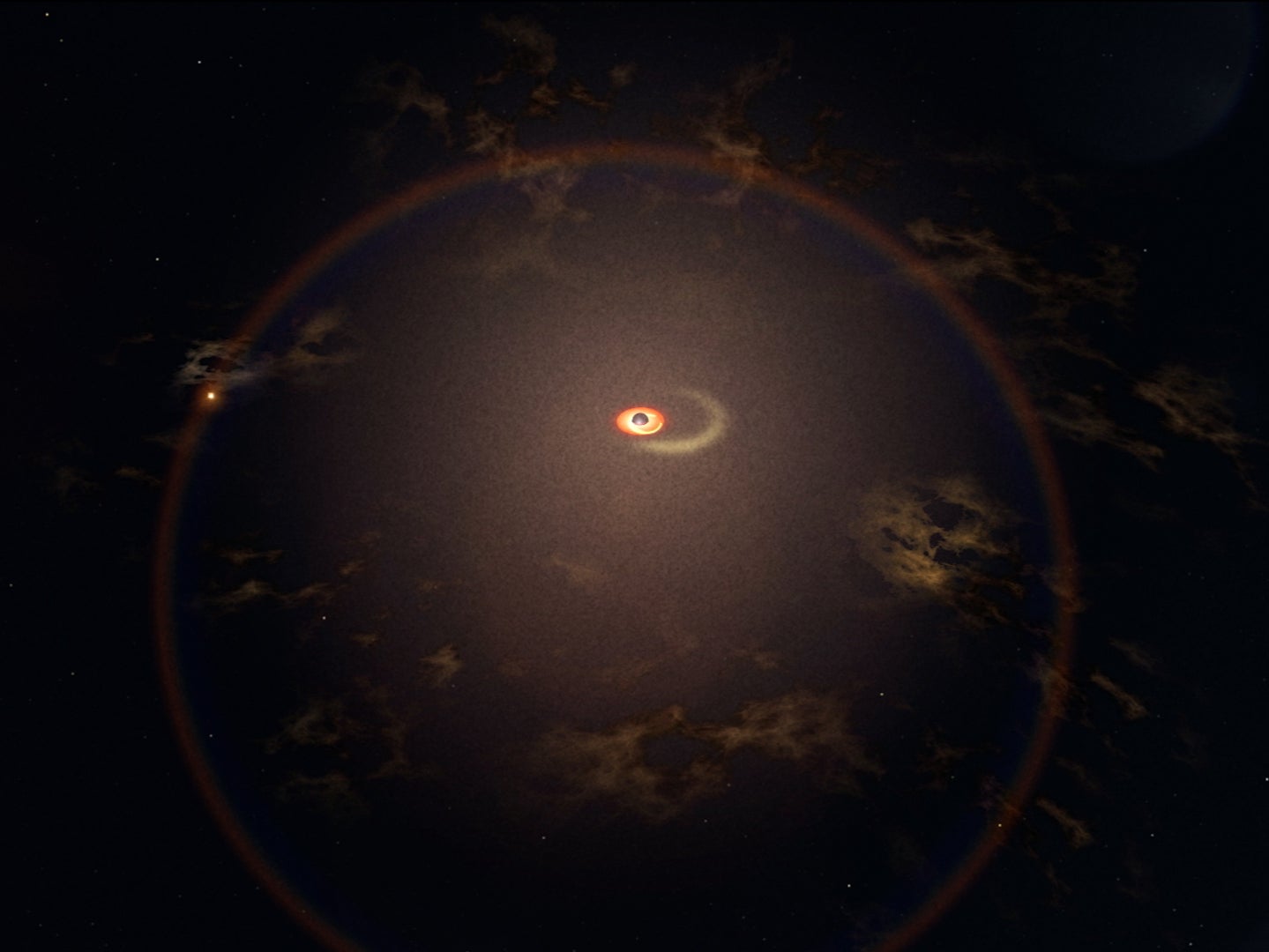 Nasa is investigating a galaxy that erupts once every 114 days that has been spotted 570 million light-years away.

The outburst, which has been classified ASASSN-14ko, has occurred 20 times so far, as observed by Nasa’s Neil Gehrels Swift Observatory and Transiting Exoplanet Survey Satellite (TESS) by measuring different wavelengths of light.

“These are the most predictable and frequent recurring multiwavelength flares we’ve seen from a galaxy’s core, and they give us a unique opportunity to study this extragalactic Old Faithful in detail,” said Anna Payne, a Nasa Graduate Fellow at the University of Hawai’i at Mānoa, in a statement.

“We think a supermassive black hole at the galaxy’s center creates the bursts as it partially consumes an orbiting giant star.”

If it is confirmed that a supermassive black hole at the centre of the galaxy is the cause of the fluctuations in light, it could help scientists better understand our universe.

Currently, there are three possible explanations for the repeating lights: the first is that it is caused by interactions between the disks of two orbiting black holes. Recent data shows that the two black holes exist, but they do not seem to orbit closely enough to cause the flares.

The second possibility is that a passing star was intercepted by the black hole, but since the flares have been consistent with regard to their shape, scientists deem this unlikely.

The scenario that carries the most weight within the scientific community is a partial tidal disruption event, when a star gets too close to a black hole and matter is continually siphoned off.

The star’s orbit is not circular, meaning each time it approaches the black hole it gets closer and more mass is depleted – Nasa suggests that gas equal to three times the mass of Jupiter is lost with every orbit.

It is, of course, unclear how long these flares will continue to last should the third theory be proved true; the star cannot lose mass forever, and so studying the phenomena is a race against time.

“ASASSN-14ko is currently our best example of periodic variability in an active galaxy, despite decades of other claims, because the timing of its flares is very consistent over the six years of data Anna and her team analyzed,” said Jeremy Schnittman, an astrophysicist at Nasa Goddard Space Flight Center in Greenbelt, Maryland, who studies black holes but was not involved in the research. “This result is a real tour de force of multiwavelength observational astronomy.”

The team plans to continue observing the outbursts, which are expected in April and August 2021.

“TESS was primarily designed to find worlds beyond our solar system,” said Padi Boyd, the TESS project scientist at Goddard.

“But the mission is also teaching us more about stars in our own galaxy, including how they pulse and eclipse each other. In distant galaxies, we’ve seen stars end their lives in supernova explosions. TESS has even previously observed a complete tidal disruption event. We’re always looking forward to the next exciting and surprising discoveries the mission will make.”

A paper on the source of this occurance, and the observations made about it, is currently undergoing scientific review.