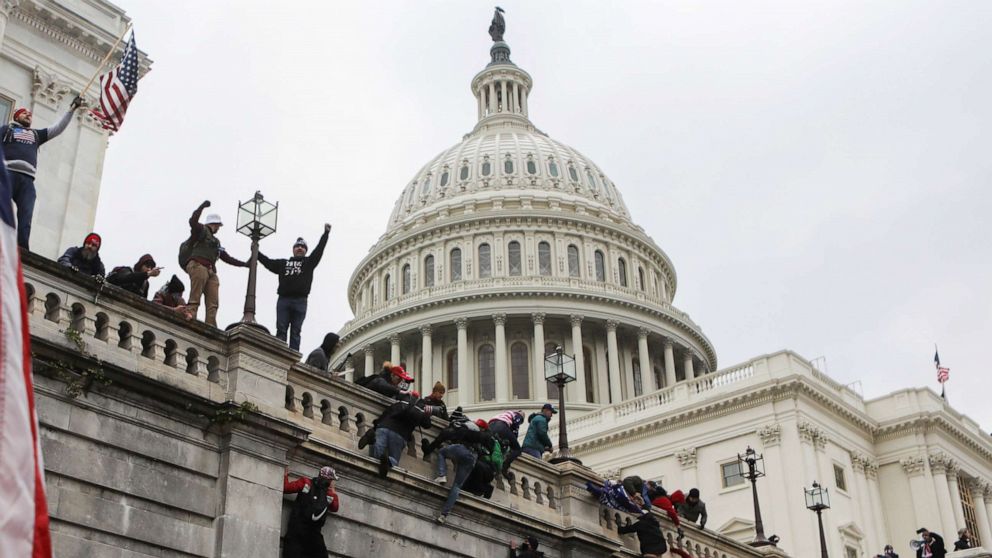 Federal authorities are continuing to charge rioters who took part in the siege on Capitol Hill on Jan. 6.

Here is the latest:

The Justice Department filed charges Jan. 25 against a New York man who allegedly posted a selfie video to his Facebook showing him smoking what appeared to be a marijuana cigarette in the Capitol, according to the FBI affidavit.

The FBI said James Bonet of Glen Falls, New York, can be heard in the video saying, “Capitol building smoking with all my people!”

According to the affidavit, Bonet shot video in the crypt of the Capitol, in which he was heard saying, “We made it in the building … We’re taking it back!”

Bonet was identified by a co-worker who shared the video with the FBI.

According to the documents, the co-worker told the FBI that Bonet “openly talks about conspiracy theories at work” and tries to get his other co-workers to subscribe to such theories. The coworker remarked that they were more concerned about Bonet’s attendance of former President Donald Trump’s rally due to the possibility he might contract COVID-19 and spread it, because videos showed him not wearing a mask.

A lawyer for Bonet was not listed.

A California man who allegedly stole documents, including a letter signed by Trump, from the desk of then-Senate Majority Leader Mitch McConnell, R-Ky., has been charged for participating in the Capitol riot.

In federal court documents filed Jan. 20, prosecutors cite a video where Tommy Allan can allegedly be heard saying he stole the documents from McConnell’s desk in the Senate chamber.

The court documents also cite a video recently posted by the New Yorker from inside the Senate chamber, which FBI investigators say shows Allan taking a document and placing it in his back left pocket.

Allan is also reportedly seen in a separate Facebook post standing outside the Capitol after the riot with “multiple documents in his hand,” including one that was the Senate’s official calendar of business, according to the affidavit. He then shows a separate document to an individual and says it was “a letter from Trump” and was “signed by Trump.”

In the video, when asked why he removed the documents from McConnell’s desk, Allan replied because he is a “taxpayer,” according to the court documents. The FBI believes Allan also attempted to take a flag from the Capitol but that it was taken from him before leaving the chamber.

The FBI began investigating Allan after receiving a tip that he made several posts on social media showing people breaking windows at the Capitol that was followed by a “disturbing post that said the next step of the Insurrection was to get rid of Justice [John] Roberts,” according to his charging documents.

Brandon Straka, the founder of “#WalkAway,” a social media campaign created prior to the 2018 mid-term elections to encourage liberals to leave the Democratic party, was charged Jan. 20 for participating in the Capitol riot.

Straka, a 44-year-old hair stylist from New York City, was allegedly seen in several social media posts and other videos in the crowd at the riot, according to federal court documents.

In one post, he is allegedly heard calling for individuals to take a Capitol police officer’s riot shield away from him.

Straka also spoke at the “Stop the Steal” rally on Freedom Plaza in Washington, D.C., the day before the riot, according to the charging documents.

In the affidavit, investigators cited one comment Straka made on Twitter disputing that Antifa were a part of the mob that stormed the Capitol.

“… it was not Antifa, it was patriots desperate to be heard,” Straka allegedly said.

Michigan resident Michael Joseph Foy, who was arrested Jan. 21 after he allegedly assaulted a police officer with a hockey stick at the Capitol riot, was ordered detained by a federal judge in Michigan until he appears before a judge in Washington, D.C.

Foy attacked the officer for 16 seconds before he was knocked down by another rioter, according to the FBI’s analysis of the video. The FBI identified Foy as the man seen in a video published by the New York Times swinging a hockey stick repeatedly at a Metropolitan Police officer who had been pulled from the entryway to the Capitol by the mob, according to federal court documents.

Morris said she believed Foy should remain in the government’s custody given the potential danger to the community he could pose.

Prosecutors described Foy as “among the most violent rioters” on the day of the insurrection, noting he is a “combat trained Marine” and “assumed a leadership role in the violence.”

Dozens of rioters who participated in the siege have already been taken into custody.