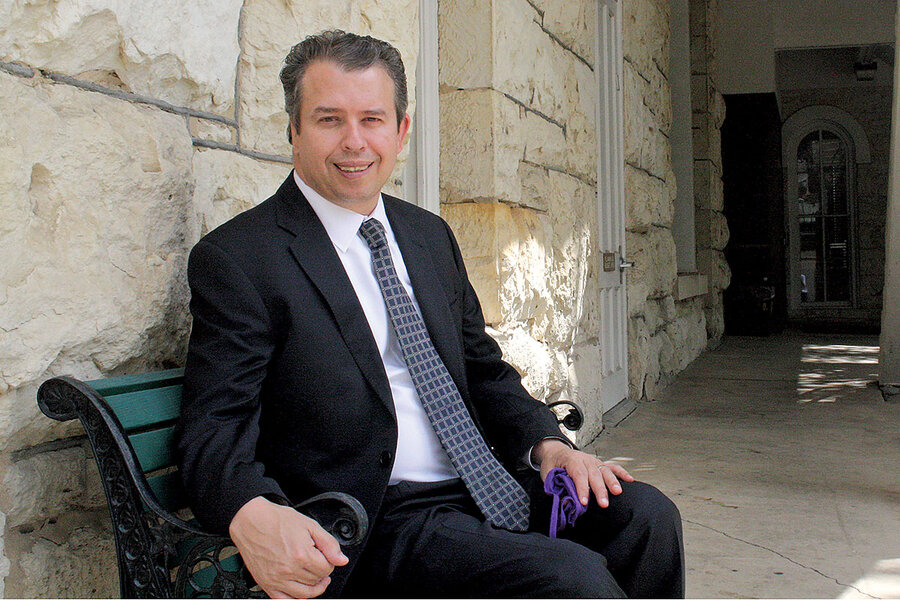 After years of hard work, Maria García-García’s dream finally came true last year: The Young Women’s Leadership Academy senior won a full scholarship to the Massachusetts Institute of Technology to study engineering. But then she faced perhaps the toughest part of the process: convincing her mother to let her eldest child leave home and move so far away.

Enter Pedro Martinez, the superintendent of the San Antonio Independent School District (SAISD), who’d faced a similar hurdle in his route to higher education. Like Ms. García-García, Mr. Martinez was the oldest child in a large, low-income family, and the first to want to go to college: His father was against it, and Mr. Martinez felt guilty about putting his education ahead of his family who needed him to help make ends meet.

“[He] really helped me to see that this wasn’t the first time someone was in a situation like this,” says Ms. García-García, of her conversation with Mr. Martinez at her school last January.

The district went into overdrive to build her mother’s trust in the system. Teachers and principals talked to her mom, assuring her MIT would have people her daughter could turn to with any issue. SAISD would stay in touch with its graduate at MIT by phone. Mr. Martinez’s wife had friends in the Boston area who could help in emergencies.

Her mother came around, she says, “because I was getting all this support she didn’t expect me to have.”

“Unless they’ve been through college, it’s very difficult for families to really help and guide their children,” says Mr. Martinez. It “is just a normal fear of the unknown. Many of these families have never left San Antonio, so even to go to [the University of Texas at] Austin, which is only an hour and a half away, it’s a different world for them.”

But, he adds, “I have seen personally that education is our best vehicle to help families deal with issues of poverty. In today’s world, if you don’t have [a college degree], you’re not going to have a living-wage job, you’re not going to be able to support a family [or] to be independent.”

An intense focus on improving academic achievement and preparing students to get into, and stay in, college is a core aspect of how Mr. Martinez is trying to improve the high-poverty school district. His analytics-heavy, private-sector-friendly approach to charters and to partnerships with both businesses and foundations is not without critics: Some believe they marginalize community influence and don’t do enough for students who can’t make those academic achievements. But on college readiness, in particular, he has helped deliver marked improvements.

Shirley Gonzales, a city councilwoman from San Antonio’s downtown west side, credits Mr. Martinez’s strong leadership for much of the success. She credits him for the “very quick results” in student achievement, as well as for a grander vision for the district. When the district was putting forward a successful $1.3 billion bond vote for campus building improvements, she recalls him saying, “Our buildings should not reflect the poverty of our community.”

The roughly 48,000-student, predominantly Hispanic district covers San Antonio’s urban core. Almost 90% of its students are economically disadvantaged, and more than half are from single-parent households.

Mr. Martinez says his college readiness focus aims to give students “armor” to survive the intensity of college.

This district covered the cost for students to retake the SAT and ACT to improve scores – 42% got “college ready” test scores this year, compared with 25% in 2017. It organizes college visits nationwide for juniors and seniors, and signed agreements with local universities guaranteeing scholarships for a certain number of SAISD graduates.

The district worked with parents to send personalized care packages to graduates at college – like the bundle of pens, highlighters, a notebook, and chocolate pretzels to 2019 graduate Emmanuel Mendez at Northeastern University in Boston. It is building networks of alumni to support graduates at out-of-state schools, and there are two full-time employees whose only job is to check on recent graduates now in college.

Statistically, SAISD college readiness – as defined by the Texas Education Agency – has increased from 45% of 2017 graduates to 66% in 2020. The value of scholarships won by students has increased from $51 million in 2015 to $99 million last year. In four of the past five years, more than half the district’s graduates enrolled in college within a year – above the state average.

Critics of his reforms say the focus should be less on the superintendent’s childhood and more on his career since then – in particular, his lack of classroom experience and his time at the Broad Academy, a program that trains aspiring education leaders, and has been criticized as too open to private-
sector influence on public education.

“Throughout his tenure, he’s made a number of decisions that really take the voice away from the people within a community,” says Alejandra Lopez, president of the San Antonio Alliance of Teachers and Support Personnel, the SAISD employee union. She points to the district’s 2018 decision to let Stewart Elementary School be taken over by a New York-based charter school company in a 10-year contract with the private company to operate the school. Ms. Lopez was a second grade teacher at Stewart, but left because of the takeover.

She argues that Mr. Martinez’s understanding of the district comes from “a very deficit-minded place,” overlooking other models and metrics for student success and reinforcing negative perceptions of communities in the district.

“It perpetuates the mindset that you have to escape your surroundings,” she adds. “We want our students to value themselves and their community and work together to improve our conditions as a whole.”

Mr. Martinez, however, believes that doing everything he can to help his students get college degrees helps the community. He points to the economic damage caused by the COVID-19 pandemic, which has disproportionately harmed American workers without higher education. “At the end of the day … you need a degree,” he says.

Many parents see the difference he makes, says Yesenia Alvarez-Gonzalez, an SAISD parent and chief program officer of Avance San Antonio, a nonprofit improving access to early childhood education for low-income residents. “The communication, the involvement, the interest he has, has been significant,” she says.

When Mr. Martinez graduated from high school in 1987, the dropout rate in Chicago Public Schools was around 43%. Half of the city’s high schools ranked in the bottom 5% in the country on the ACT.

His freshman class had 700 students, and as students dropped out, that dwindled to 171 his senior year.

“To this day, it still angers me,” he says. “Throughout my career, including here [in San Antonio], that is my lens.”

After graduating from the University of Illinois, Urbana-Champaign with majors in accounting and finance, he was director of finance for the Archdiocese of Chicago. In 2003 he became chief financial officer for Chicago Public Schools, working under future U.S. Education Secretary Arne Duncan.

“The combination of being great on the financial side, but really, really understanding our city and our kids in a way few can,” says Mr. Duncan, “that’s what made him an invaluable part of our team.”

He attributes his college initiatives success to a Valero Foundation grant. A $50,000 gift from the San Antonio Area Foundation and Wells Fargo, this funded increased access to technology and the internet for students. The Alamo Colleges District, a community college network, assumed management of three district high schools in November as part of efforts to improve college readiness.

While acknowledging he doesn’t have much classroom experience, he notes that his business background has enabled him to attract business support that can fund the best hires, which make his programs work.