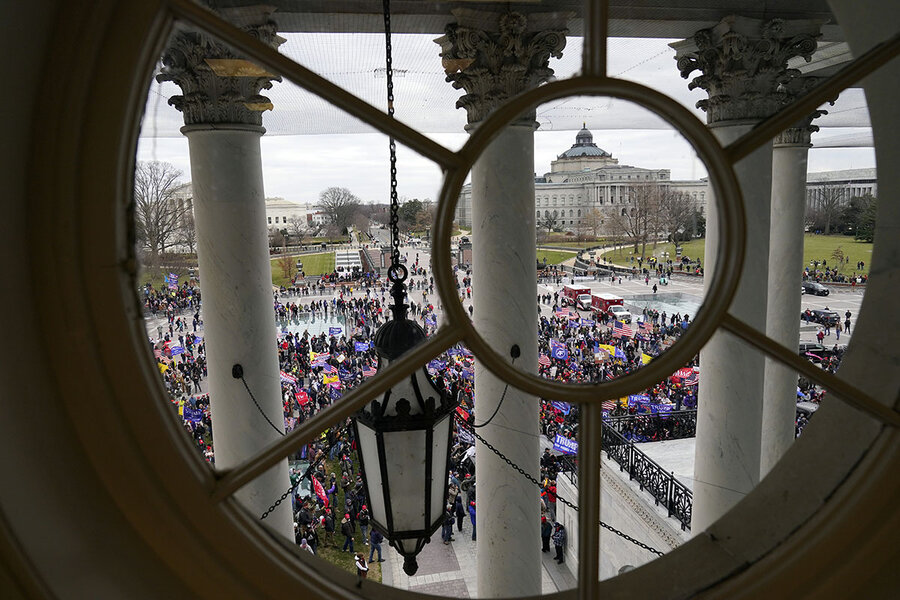 Paula Wilson’s children watched the Capitol siege unfold on TV from their Wisconsin living room, texting her updates as she worked an emergency room shift. When she got home, her son showed her a post from his 10th grade social studies teacher about his upcoming travel plans for Jan. 6.

Before he left town, the teacher, Jeff Taff, had assigned the class homework – and explained that he was headed to Washington for a few days.

“I am sorry, but standing up for election integrity and our right to vote in FAIR elections is too important for me to NOT be there,” he wrote, according to a photo of his post on Google Classroom.

“I couldn’t believe it,” says Ms. Wilson. “I was just thinking, he has a right to do whatever he wants, but why would he post this for all of his kids?”

The presence of school staff at or near the Capitol on Jan. 6 when a rally in support of former President Donald Trump led to violence has complicated the task of school districts across the country. Many have wrestled with convening class discussions about the polarizing events of that day while respecting employees’ political views and the political passions in the communities they serve. Some districts have been forced to consider disciplining personnel at a time when they’re also under sharp scrutiny from parents for their pandemic plans.

Some educators are unsurprised to see the nation’s fraught electoral politics crashing the classroom, stress-testing the role of educators as guides to civics and history.

“Every other controversy in our society that’s playing out appears in our public schools too,” says Tom Hutton, interim executive director of Education Law Association.

Ms. Wilson says her son’s revelations about Mr. Taff troubled her, so she reported her concerns to the school. An image of another Google Classroom post by the teacher appeared to link to a video about claims of widespread voter fraud.

Burlington Area School District has placed the teacher, whom it hasn’t named and who used personal days for his travels, on paid administrative leave pending an investigation. Legal experts say this is standard.

When the district posted a statement to its Facebook page Jan. 7, one user wrote that the district had no right to discipline the teacher. Another seemed displeased with the district’s “non-action approach.”

Meanwhile, the district investigation is widening its scope beyond an assignment posted to Google Classroom the week of Jan. 6, according to spokeswoman Julie Thomas.

In an email to the Monitor, Mr. Taff’s attorney, Todd Terry, said the teacher prioritizes his students’ education. He added that his client is cooperating with the investigation while defending himself against “misinformation, venom and outright lies.”

Ms. Wilson, the 10th grader’s mom, says she has broader concerns than the initial Google Classroom post. She says the family has reported other allegations of politicized remarks made by the teacher during class.

Responding to a question about how districts can engage constructively with their communities during a time of political polarization, Ms. Thomas said via email that schools can create “a safe place to learn.”

“We encourage our students and staff to be kind,” she wrote.

Ms. Wilson’s fiance, Jon Phetteplace, was met with less than kindness after speaking out. The Burlington native began receiving online threats after publicly questioning Mr. Taff’s instruction. “It really doesn’t make us want to be part of the community anymore,” he says.

Educators aren’t the only ones facing fallout from Jan. 6. Since the pro-Trump march devolved into a siege that left five dead, private and public employers countrywide have investigated and disciplined staff for potential wrongdoing.

School district employees in Pennsylvania, Arkansas, California, and elsewhere have drawn scrutiny for their attendance. Some have publicly pushed back, including two bus drivers who sued a West Virginia superintendent after placing them on paid leave.

Last summer’s mostly peaceful racial justice demonstrations also became a flashpoint for divisive politics in U.S. schools. A Texas public school teacher was placed on paid leave for hanging Black Lives Matter and LGBTQ posters in her classroom. In Vermont, a  public school principal was fired for Facebook comments related to the Black Lives Matter movement, which the school board found to be derogatory against African Americans.

“If you just went to DC, attended the rally, came home, and weren’t involved in any activities at the Capitol building itself, it’s highly likely there’d be nothing that the school district could do – even if they disagreed with you,” says Jim Hanks, a retired education law attorney in West Des Moines, Iowa.

But some may have done more than that. So far, at least one educator faces criminal charges linked to the Capitol siege.

A former school occupational therapist from Ohio, Christine Priola was arrested and charged in federal court this month for unlawful activities at the Capitol. Social media users helped law enforcement identify her in photos from Jan. 6, when she allegedly appeared inside the Senate chamber with a sign spelled in red: THE CHILDREN CRY OUT FOR JUSTICE.

The following day, Ms. Priola sent a resignation letter to Cleveland Metropolitan School District that noted her plans to “expose the global evil of human trafficking and pedophilia” allegedly in the government – echoing QAnon conspiracy theories. Ms. Priola did not respond to requests for comment.

Blowback in the community

Other factors complicate public school staff members’ rights. In a case involving a California state prosecutor, the Supreme Court ruled in 2006 that public employees’ speech is limited when made “pursuant to their official duties.”

For districts weighing how to respond to what teachers do outside class, public blowback adds another twist. If a public employee’s First Amendment activity “causes such disruption in a community that you are rendered ineffective as a teacher, you could lose your job” or face other discipline, says Mr. Hanks.

For Jason Berry, an elementary school P.E. teacher in Harrisburg, Pennsylvania, his presence at the Jan. 6 protests put him in an uncomfortable spotlight. But after his employer, the Susquehanna Township School District, investigated him, it said his actions didn’t violate their policy – and were protected by the First Amendment.

Mr. Berry says he’s grateful that he’s been cleared to keep teaching. “Susquehanna did a wonderful job and looked at the facts,” he says.

Mr. Berry maintains that he did not engage in the Capitol violence, and the district confirmed it had approved his personal day off. That day, a Christian TV network showed a video of him and his friends praying and worshipping at the rally. In the clip, Mr. Berry wears a Trump hat. A photo of the clip was then passed around social media out of context, he says.

A community member began an online petition Jan. 6 that called for Mr. Berry’s removal, pointing him out among “other maskless insurrectionists.” It garnered over 5,000 supporters. A week later, the petition organizers clarified in a post that there was “no current evidence” to substantiate that the teacher was violent or stormed the Capitol.

Mr. Berry says he was religiously – not politically – motivated to drive to Washington with church friends Jan. 6. He says he went to pray for the nation. “It was a day when a lot of different decisions would be made, and so I thought it was a great opportunity to come up with believers and pray for the United States,” says Mr. Berry, who is Christian.

Mr. Berry says he’s moving on from the attack on his beliefs: “I chose to forgive them.”

In a Jan. 11 video, Susquehanna superintendent Tamara Willis condemned the Capitol violence and said she welcomed the public’s concerns raised by the investigation.

“I am charged with making decisions for this school district in all of its diversity based upon evidence, even when emotions are running high and public opinion seemingly pressures us to do otherwise,” she said.

“We need more civics education, not only for teachers and school employees, but also for students, so that people understand the limitations to their freedom of speech rights,” she says.