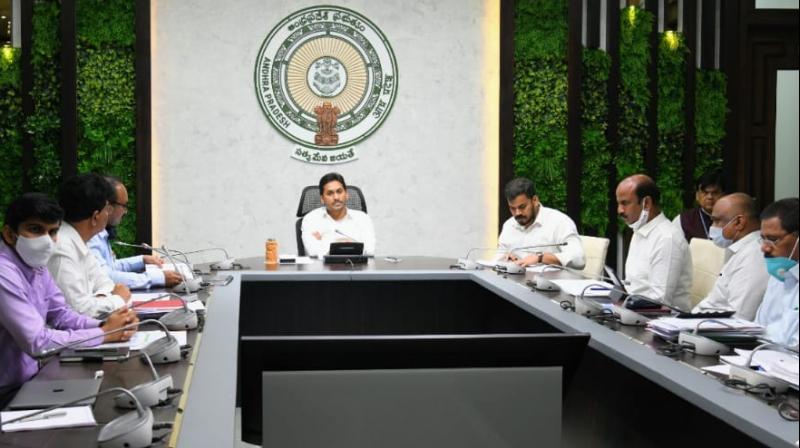 VIJAYAWADA: Chief Minister Y.S. Jagan Mohan Reddy has asked officials to ensure completion of important irrigation projects including Polavaram in the first phase of implementation of works itself.

The Chief Minister was holding a review meeting on the progress of irrigation projects on Friday at the CM Camp office at Tadepalli. He asked them to prepare a detailed action plan on such projects of the second phase and concentrate more on the north-Andhra region.

The officials said civil works for the Nellore barrage were completed and the gates will be fixed by March 31 while the inauguration is planned by April. Major civil works of Sangam barrage are complete and the material related to gates has reached the project site. Works are going on at a brisk pace. Clamping of the gates will start in two weeks’ time and the work will be completed by end March for inauguration in April.

Works are slow in Owk tunnel due to presence of loose soil. Some 14,000 cusecs of water are being pumped out from two tunnels till now. Problems arose in the excavation works of another 134-meter tunnel due to rain and loose soil. The officials have prepared an action plan to remove the soil and strengthen the tunnel by July.

On Polavaram, the officials said spillway road of Polavaram project will be completed by February 10. Works on spill channel are progressing at a brisk pace. Fitting of radial gates will be over by April and the construction of approach channel complete by May.

The CM asked officials to appoint a special officer for getting approvals of designs and ensure no delay in the import of cylinders. The officials said works of reach 1 and reach 4 of  Upper Cofferdam will be complete by end of March, that of reach 2 by April, that of reach 3 by end of May. The works of Cofferdam will be complete by next rainy season. He also asked them to ensure no one is affected due to the Cofferdam and expedite rehabilitation programmes.

They said legal problems of Tarakarama Tirthasagar project will be solved soon and the project will be ready by December 2022. Steps are being taken to complete the Mahendra Tanaya project by June 2022.