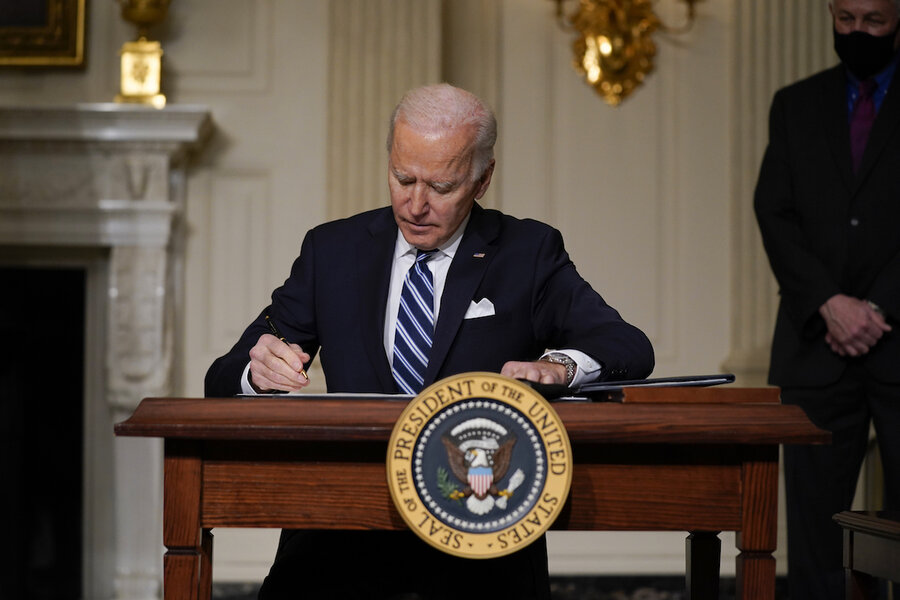 United States President Joe Biden arrived at the White House ready to wield his pen to dismantle Donald Trump’s legacy and begin pushing his own priorities.

Former presidents Donald Trump and Barack Obama both relied on executive orders and other presidential directives to get some of their most controversial policies around a deadlocked Congress. But, arguably, no president has come out of the gate as eager to use the authority as Mr. Biden.

Below is a primer on how the presidential power works, and how its impact can be fleeting.

An executive order is a signed, written, and published directive from the president that manages operations of the federal government.

Congress can’t just pass legislation to overturn an order, but it can use legislative action – such as cutting off funding – to gum up the president’s intentions. A new president may overturn a predecessor’s order by issuing another executive order effectively canceling it. Mr. Biden has done that repeatedly during his first days in office as he looks to chip away at Trump-era policies on a gamut of issues, including environmental regulations, immigration policies, and the government response to the coronavirus pandemic.

Presidents going back to George Washington have issued thousands of directives to manage federal government business, according to data collected by the American Presidency Project at the University of California, Santa Barbara.

Many are innocuous, such as giving federal employees the day after Christmas off. But executive orders – and their policy sausage-making siblings, the proclamation and political memorandum – can also be used by a president to push policy objectives that the leader can’t get through Congress.

Winding back the clock

Time is of the essence for Mr. Biden, who vowed as a candidate to act quickly to get the coronavirus pandemic under control and undo what he considers the damage done by Mr. Trump’s policies.

Many of Mr. Biden’s orders during his first days in office are directly related to the pandemic – a mask mandate on federal property, an executive order providing guidance on safely reopening schools, and stopgap measures intended to increase food aid and protect job seekers on unemployment because of the virus.

But Mr. Biden has also used executive action to try to wind the clock back more than four years to the Obama presidency.

Mr. Biden also signed a memorandum to preserve Deferred Action for Childhood Arrivals, the Obama-era program that has shielded hundreds of thousands of people who came to the U.S. illegally as children from deportation since it was created in 2012 through an Obama directive. Mr. Trump issued his own executive order to undo DACA in 2017.

Other orders targeting foundational policies of the last administration include a Biden directive to reverse Mr. Trump’s ban on travelers from several predominantly Muslim countries, executive action to rejoin the Paris climate accord, and a proclamation stopping construction of his predecessor’s border wall.

Both sides do it – and both sides complain

To be sure, modern presidents from both parties have been heavy users of executive orders – and have been criticized by the opposition party.

Not surprisingly, some Republicans have complained about Mr. Biden’s early reliance on executive orders. Sen. Marsha Blackburn of Tennessee scoffed in a tweet, ”@POTUS, you can’t govern with a pen and a phone.”

Democrats have, by and large, welcomed Mr. Biden’s orders as a necessary salve to deal with some of Mr. Trump’s most divisive policies. But the president has also faced substantive criticism from both the left and right about some of the early orders.

Republicans have complained that Mr. Biden is wasting taxpayer dollars by halting construction on the U.S. border wall since signed contracts related to construction will still have to be paid out. On the left, some racial justice and civil liberty groups were underwhelmed by a series of orders that Mr. Biden issued in what White House officials said was an opening effort to address equity and racial injustice.

Mr. Biden sold himself to voters as the antidote Washington needs: the deeply experienced statesman who could bring bipartisan comity to Washington. As his presidency plays out, an overreliance on executive orders could undercut that argument.

Limits on a president’s power

The courts and Congress can both check a president’s power to govern by executive fiat.

Already, Mr. Biden saw his attempt to order a 100-day deportation moratorium hamstrung by a federal judge. U.S. District Judge Drew Tipton found the Biden administration had failed “to provide any concrete, reasonable justification” for a pause in deportations and ordered a restraining order blocking Mr. Biden’s order from going into effect.

President Harry Truman saw his attempt to seize steel production facilities in the midst of the Korean War thwarted by the U.S. Supreme Court, which found that the president lacked authority to seize private property without authorization from Congress.

Mr. Obama tried to use executive authority to fulfill his campaign pledge to close the U.S. military detention center at Guantanamo Bay, Cuba, that over the years has held many high-profile international terror suspects. Congress stymied him by voting to block funding to pay for the transfer of prisoners from Guantanamo to the U.S., including for prosecution or medical care.

The experiences of both Mr. Trump and Mr. Obama underscore the fleeting nature of executive orders.

Both saw their most durable policy legacies come through congressional legislation – for Trump, the 2017 tax cuts, and for Obama, his signature Affordable Care Act.

Mr. Trump tried mightily but failed to push a Republican-controlled Congress to repeal “Obamacare.” He did, however, diminish a key aspect of the health care law when his own tax overhaul legislation reduced the penalty for not having insurance to $0.

Now Mr. Trump is seeing many of his own orders, proclamations, and memoranda shredded by Mr. Biden. And Mr. Biden could very well see many of his executive actions undone by whoever follows him into office.

Biden economic adviser Brian Deese acknowledged that some of the president’s executive actions – such as directives retooling government calculations on food assistance for Americans living in poverty and another extending moratoriums on evictions for Americans whose lives have been upended by the pandemic – were merely stopgaps as the president tries to win bipartisan support for a $1.9 trillion coronavirus relief package.

In the end, Mr. Deese said, the orders, while helpful, are pale substitutes for comprehensive legislative action passed by Congress.