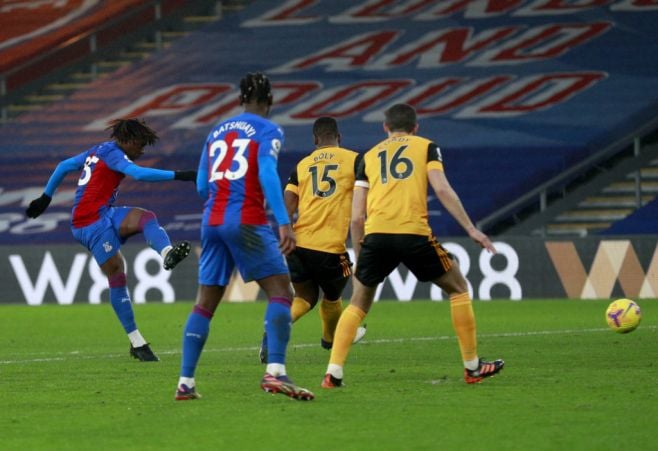 Ebere Eze grabbed the only goal of the game for Crystal Palace in their 1-0 win over Wolves, © PA Wire/PA Images

The summer signing struck for the third time since his move from QPR to lift spirits at the club after a run of one win in 10 matches in all competitions.

It was also Palace’s first triumph over Wolves in five attempts and increased the woes of Nuno Espirito Santo, who has not seen his players taste success in the Premier League for six weeks with this another toothless showing.

After the Eagles were outclassed by West Ham in midweek, Roy Hodgson made six changes and switched formation from his favoured 4-4-2 for this season to a 4-2-3-1.

Wolves handed a full debut to loan signing Willian Jose but with both sides out of form it was no surprise chances were limited early on.

Good hold-up play by the recalled Michy Batshuayi created a chance for returning Eagles full-back Nathaniel Clyne in the opening exchanges and yet the ex-England international fired over from 20 yards.

Since Wolves’ joint-top goalscorer Raul Jimenez suffered a fractured skull at Arsenal on November 29, the visitors had triumphed just once in the division and they missed his presence when Ki-Jana Hoever and Joao Moutinho put in excellent balls across the six-yard area in quick succession.

In wet and windy conditions at Selhurst Park, the two sides were patiently waiting for an opening and not long after Wilfried Zaha had a penalty appeal turned down, the hosts created another decent opportunity.

Fine work by Patrick Van Aanholt saw the ball roll to Clyne and although his shot was blocked, it came for Batshuayi but he smashed over.

Nuno’s side failed to register a shot in the first half but it was Palace who made the first substitution when James McCarthy was forced off with an injury and replaced by Jairo Riedewald during the interval.

The wait for an effort on target ended in the 56th minute when Jose tested Vicente Guaita in the home goal with a fine strike on the turn following’s Daniel Podence’s cross.

Like London Buses, four minutes later it was Palace’s turn to hit the target and it saw them open the scoring.

After wonderful quick passing on the left, Clyne’s burst forward on the opposite wing was spotted by Zaha and the defender managed to find Jordan Ayew in space.

Palace’s number nine passed into Eze, who let the ball roll across him to fool Leander Dendoncker before he unleashed a venomous strike past Rui Patricio from 16 yards.

Wolves introduced Adama Traore for the final 27 minutes but the game should have been put to bed soon after.

A wonder break gave Palace a two-against-one situation and while Zaha brilliantly checked back onto his left foot, he thundered his effort against the crossbar and it stayed 1-0 to the hosts.

Fabio Silva was summoned by the visitors in the 78th minute and fellow forward Jose thought he equalised with a powerful header but Guaita impressively got down low to save and help Palace rise to 13th.