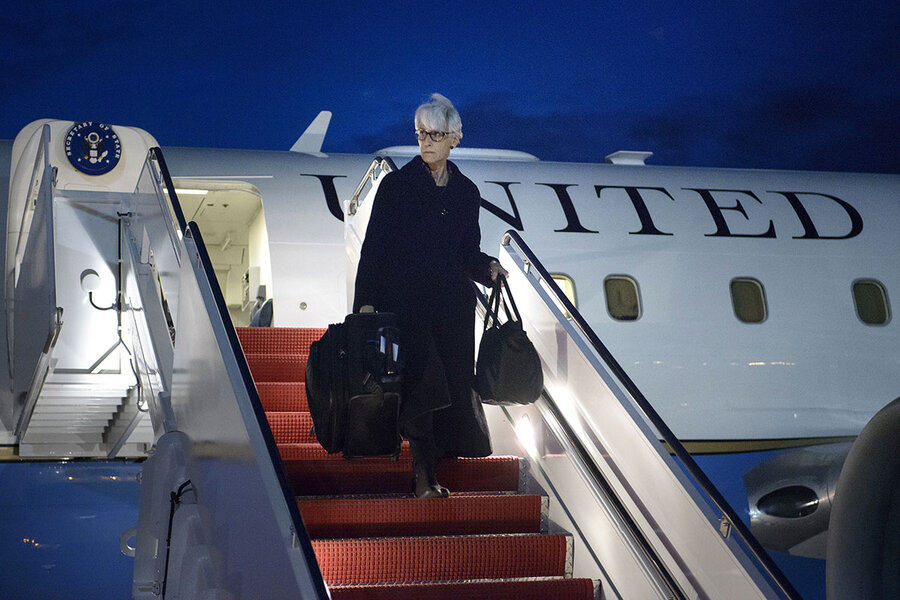 As the State Department’s second-ranking diplomat, Ms. Sherman would have more on her plate than just Iran. At the same time, her appointment suggests to many that Mr. Biden expects the Iran file to be a critical and continuing feature of his administration’s national security priorities and diplomatic focus.

Also, that he wants an experienced team to hit the ground running on Iran. (Add to Ms. Sherman’s appointment word that Mr. Biden intends to name as his Iran envoy Rob Malley, who was the Obama national security staff’s member of the JCPOA negotiating team.) Indeed, the Middle East press has recently carried stories claiming that “informal contacts” between the Biden team and the Iranians have already occurred.

Mr. Biden has said he aims for a quick U.S. return to the Iran deal, which limited its nuclear program and pulled it back from the brink of the capability to develop a nuclear weapon, once Iran agrees to return to compliance.

For its part, the United States would presumably have to undo some of the sanctions the Trump administration imposed on Iran after leaving the deal in 2018.

Once such a compliance-for-compliance deal was reached and Iran’s nuclear program was “back in the box,” as Biden national security officials like to say, the administration would turn to negotiating a second agreement “lengthening and strengthening” the 2015 accord.

The aim of that follow-on diplomacy would include addressing Iran’s growing arsenal of ballistic missiles and its destabilizing activities across the region, as well as steps to make key pieces of the JCPOA permanent.

But no one foresees diplomacy with Iran going quickly or easily. In his Senate testimony last week, since-confirmed Secretary of State Antony Blinken said any follow-on deal with Iran addressing other concerns about its behavior in the region is a “long way” off.

And at his first briefing with State Department press Wednesday, Mr. Blinken said of negotiating any “longer and stronger” deal with Iran that, “We’re not there yet, to say the least.”

Indeed, Iran diplomacy is likely to stretch across Mr. Biden’s four-year term, many experts say, with crises and stalemates along the way. And that may help explain why Mr. Biden turned to so many experienced Iran hands – including Ms. Sherman – to fill out his diplomatic team.

Some experts worry that Mr. Biden’s turn to experience means the “new team” will simply return to what the Obama administration did. Perhaps mindful of that, Mr. Blinken pledged in his briefing to avoid “groupthink” on Iran and other issues.

Others, including some longtime critics of the JCPOA, say they see reassuring signs that the reassembled national security team is not out to simply reconstruct the past when it comes to Iran.

“If Biden and his team are to be taken at face value, they do seem to realize that it’s not 2015 anymore … [and] they all now readily offer up that it would be very bad for U.S. interests if the [JCPOA] was simply implemented as is,” says John Hannah, who served as Vice President Dick Cheney’s national security adviser and is now senior counselor at the Foundation for the Defense of Democracies in Washington.

“While they still believe [the JCPOA] continues to have short-term utility as a means of averting an immediate crisis over Iran’s nuclear program, their advocacy for significant changes to the deal and for expanding negotiations to include non-nuclear subjects is an important shift from five years ago,” he says.

“If that’s … the strategy they intend to pursue,” Mr. Hannah adds, “I don’t really see a problem with the fact that they were all JCPOA supporters in the past.”

Others concur that what they’re hearing out of Mr. Biden’s new-old Iran team is not simply back to the future.

“I am seeing a ‘hardening,’ if you will, on the part of the Biden team,” says Nicholas Heras, director of government relations and a Middle East expert at the Institute for the Study of War in Washington.

He notes, for example, that Jake Sullivan, Mr. Biden’s national security adviser, and other Biden confidants were “non-committal” during the 2020 campaign concerning Iran’s ballistic missiles.

But now addressing the missiles is regularly cited as “an objective for a follow-on deal,” he adds – including recently by Secretary Blinken.

Mr. Heras says the Biden team has set the bar very high for a follow-on deal, noting that Iran considers its missiles “its best source of strategic pressure” against Israel and unfriendly Gulf Arab states.

“This is Sullivan’s gamble, because now that he’s made Iran’s ballistic missiles a hill that needs to be taken in negotiations,” he says, “his team will be judged on whether they actually take that objective.”

But first comes the matter of getting the JCPOA back on track. And Mr. Biden’s hopes for a quick “compliance-for-compliance” return to the nuclear deal notwithstanding, regional experts say any number of complicating factors could nip the sprouting U.S.-Iran diplomacy in the bud.

One is the Iranian parliament’s recent vote, in the wake of the assassination of Iran’s top nuclear scientist in November, requiring the government to ramp up nuclear activities, including enriching uranium to a higher grade closer to that needed to deliver the fissile material required for a bomb. The law also calls for reducing access to United Nations atomic energy inspectors if sanctions relief is not secured by Feb. 21.

On the U.S. side, dubious members of Congress are worried Mr. Biden will gut former President Donald Trump’s sanctions and other elements of his “maximum pressure campaign” just to get back into the JCPOA – and have no leverage left for getting follow-on concessions from Iran.

But perhaps the key factor leaving the U.S. with a narrow window for diplomacy is Iran’s political calendar, with a presidential election set for June.

Some Iran experts believe a successful return to negotiations with the U.S. could provide a boon for a more moderate candidate to emerge victorious, while continued stalemate with the U.S. would likely favor a hard-liner.

But others caution against acting out of hopes of influencing the election outcome.

“I just don’t think the U.S. should or can ‘game’ Iran’s political system,” says Mr. Hannah. The U.S. needs to figure out its essential interests with respect to Iran and what objectives it can realistically achieve with the resources it’s prepared to apply, he says, “and then pursue them systematically irrespective of who Iran’s unelected leaders have allowed to rise to the presidency.”

Iranian officials, including Foreign Minister Javad Zarif – who has worked closely with the members of Mr. Biden’s foreign-policy team, including Ms. Sherman – insist that the ball is now in the U.S. court. The U.S. pulled out of the deal, they say, and it’s now up to the U.S. to make the first moves, starting with lifting sanctions, to get the deal back on track.

But some regional experts say such tough talk belies a strong desire, especially among Iranian moderates, to get back to diplomacy with the U.S. after the diplomatic standoff and heightened tensions of the Trump presidency.

“There’s no other team the Iranians are going to engage with,” Mr. Heras says, “that is going to be as willing to walk down the path of diplomacy.”