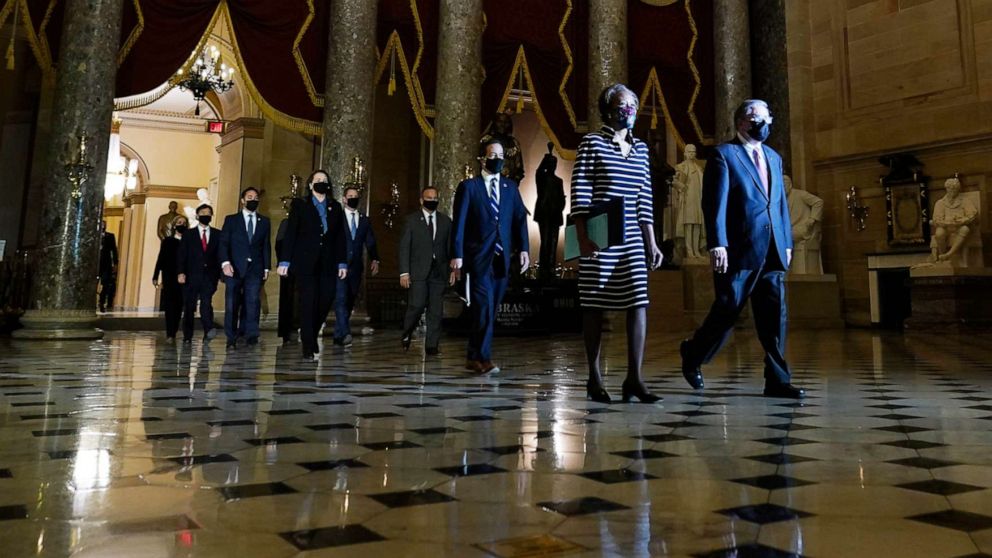 The article of impeachment accusing former President Donald Trump of “incitement of insurrection” has now been sent from the House to the Senate. There will be arguments from constitutional scholars over whether a former president can be tried on impeachment, but another more political debate has surfaced over doing so in this moment of time in America.

Many in the GOP have settled on the talking point that holding Trump to account for his words and actions is going to divide the country even further and is in opposition to President Joe Biden’s message of unity and healing.

Let’s put aside the hypocrisy of this argument coming from folks who have enabled one of the most divisive presidents in U.S. history, and many of whom have sown division for years, and let me make a historical argument about why this trial is important to further truth, justice and ultimately healing for our nation.

As I mentioned on “This Week,” there are numerous examples from around the world of the need to get to truth and accountability before you get to reconciliation (think South Africa emerging from the scourge of apartheid in the 1990s). However, there is a more telling reference point in our own country’s long and stumbling journey to a more perfect union. Let’s look at the incredible division after our Civil War in the 19th Century, and Reconstruction, which was supposed to ensure basic rights for African Americans as they emerged from slavery.

When President Abraham Lincoln delivered his second inaugural address in 1865 — “With malice toward none; with charity for all; with firmness in the right, as God gives us to see the right, let us strive on to finish the work we are in” — he was beginning to formulate plans for reconstruction of the South, to deliver accountability and to create a structure of justice for African Americans.

The assassination of Lincoln at Ford’s Theatre by a slavery-supporting Southern Confederate turned these Reconstruction efforts over to his vice president, Andrew Johnson, who was elevated to commander-in-chief in the aftermath of this tragic event. As a Southern-sympathizing leader, President Johnson did not carry on Lincoln’s vision, and he was opposed to “federally guaranteed rights for Black Americans.”

Johnson sought unity, but he neglected to understand that you can’t have unity and healing without an examination of truth and ensuring accountability. And what happened because of this? America saw obstacles erected in many states to prevent African Americans from being fully part of our Union, such as the passage of Jim Crow laws, the rise of the KKK and numerous state impediments put into place which created a substantive system of injustice.

It took nearly another 100 years before the promise of Lincoln was finally fulfilled in the passage of the Civil Rights and Voting Rights acts in the 1960s. Jumping too quickly to unity before we dealt with accountability and injustice led to the rise of myths (i.e., Lost Cause narrative glorifying the Confederacy), further distance from the truth and divisions in our country that remain unhealed.

Yes, 40% of the American population still remains supportive of Trump and many will be upset by holding the former president accountable, but in 1865, there was roughly the same share of the country supporting the South and continued inequality for African Americans.

The staircase to unity, healing and justice starts with the steps of truth and accountability. Leaping too quickly to unity, skipping over those first few steps, will likely lead us to stumbling, falling and failing as occurred in the aftermath of the Civil War, and allow years of division to continue to tear us apart (including insurrectionists storming the Capitol, some holding Confederate flags). Conservatives, progressives and any other political persuasion must be able to come together on some fundamental values we teach our children on truth and responsibility.

Let’s start there as an American family, let us learn from our own history, and certainly we should be able to learn from the mistakes of our past, so that we might be able to continue to perfect our republic and heal the wounds that so many citizens suffer.

This pending trial in the Senate is a great opportunity to achieve the vision of our founders by pursuing the truth and holding the destructive forces in America accountable. It is through that process when genuine unity can come. As Nelson Mandela said, “True reconciliation does not consist in merely forgetting the past.”

Matthew Dowd is the chief political analyst for ABC News. Opinions expressed in this column do not necessarily reflect the views of ABC News.