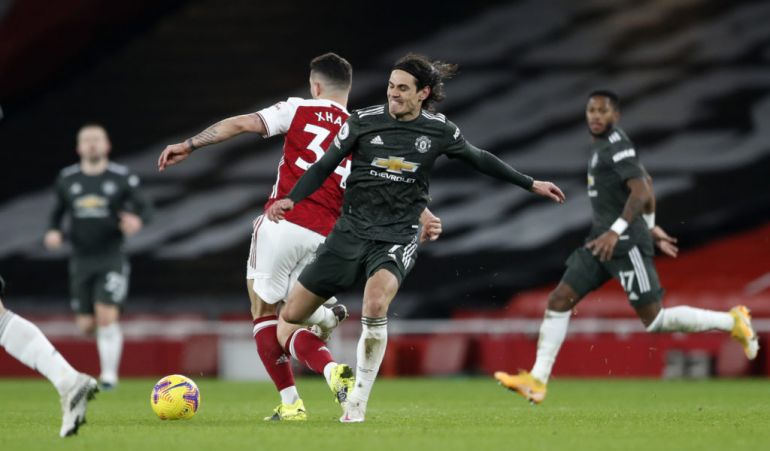 Manchester United fell further off the pace at the top of the Premier League as they were held to a goalless draw at Arsenal.

Ole Gunnar Solskjaer made five changes from the shock defeat to bottom club Sheffield United in midweek but had to settle for a 0-0 draw against a Gunners outfit missing arguably their three best players.

Captain Pierre-Emerick Aubameyang, Bukayo Saka and Kieran Tierney all missed out but Mikel Arteta’s side have been in much better form of late and came closest to taking the three points through an Alexandre Lacazette free-kick which hit the crossbar.

United created more chances but could not find a way through, and they are now three points behind leaders Manchester City, having played a game more than their neighbours.

Meanwhile, Arsenal stretch their unbeaten league run to seven games and Arteta will be hoping to welcome back his absent trio sooner rather than later having been able to hand new signing Martin Odegaard his debut off the bench.

United’s pressing game saw them win plenty of the ball in the opening exchanges and only a fine save from Bernd Leno prevented them taking the lead.

A corner was cleared to the edge of the Arsenal box where Fred collected and bent a shot towards goal, Leno tipping the effort behind at full stretch.

Arsenal could not create any clear-cut openings but Gabriel Martinelli – in for Saka in the only change for the hosts – got back in the nick of time to prevent a Paul Pogba pass being turned home by Marcus Rashford.

Emile Smith Rowe was enjoying a good start to the game and he broke into the United half before feeding Nicolas Pepe, whose shot curled wide of David De Gea’s post.

Bruno Fernandes was the next United player to pass up a decent opportunity as he failed to hit the target having been played in behind by a good Pogba pass.

Pogba moved into a deeper midfield role as Scott McTominay was forced off with injury and replaced by Anthony Martial.

But it was Rashford who had another good chance, failing to get a shot away and instead eventually teeing up Fernandes, who was fouled on the edge of the box.

His free-kick flicked off the head of David Luiz, wrong-footing Leno but flying narrowly over the crossbar.

Arsenal, who introduced Willian in place of Martinelli for the second half, were much quicker out of the blocks as the former Chelsea midfielder and Pepe saw shots blocked by United defenders.

But Arsenal were looking much sharper and Lacazette rattled the frame of the goal with a free-kick he won after being fouled by Harry Maguire.

Moments later and the impressive Smith Rowe drove a shot at De Gea which the Spaniard had to push clear.

Odegaard would be given a 10-minute cameo for his debut as he replaced Smith Rowe for the closing stages after United had swapped Rashford for Mason Greenwood.

Both sides were looking to win the game as Cavani poked just wide, United now having scored just once in five games against their big six rivals this season.